My team and I are currently tied for 1st in skills with an equivalent programming score to the ones above us. The skills ranking rubric is as follows: 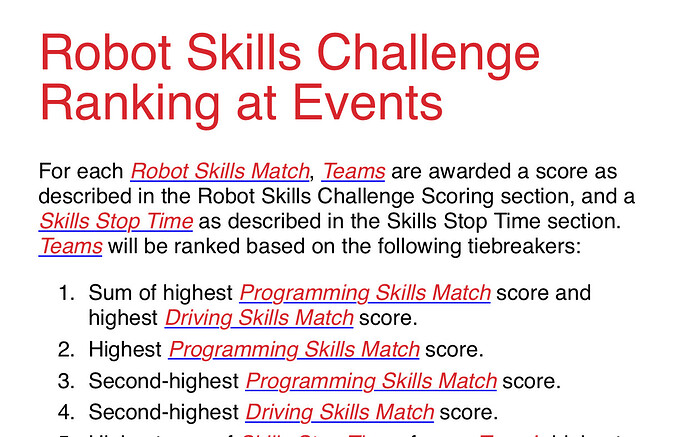 We did not do a second programming skills run, and they did and got a minuscule amount of points. What is the definition of second-highest? Will our second auton be counted as our only run or 0?

Theoretically, it shows consistency. If you can score high several times, that should equate to a consistent programming routine/driving strategy.

You should be given at least the opportunity to have 3 attempts though, so use them.

Will our second auton be counted as our only run or 0?

So because there is another team who has some points, and you didn’t attempt a second run, they would be first.

The introduction of combined skills a few years back put a lot more weight to programming skills, and we’ve seen a code push recently in making autonomous more valuable with the AWP.

Sadly, the line for skills was 11 people at it’s peak, this was as many runs as we could do. It was a really competitive tournament. Although, one could argue, our programming worked 100% of the time and their’s worked 50%. We could have gunned to get another opportunity and sent a team member to wait in line without the robot like they did but we didn’t, and that’s our bad

We’ll do better next weekend

We’ll do better next weekend