Someone please help me…

My students built a robot that is pretty fast, but very hard to control. Will this gear pack help us with controlling the robot? I seriously have no clue what to do except have them change their gear ratio. Does anyone have any pictures they can show me of them using the differential & bevel gear pack?

Thank you in advance! 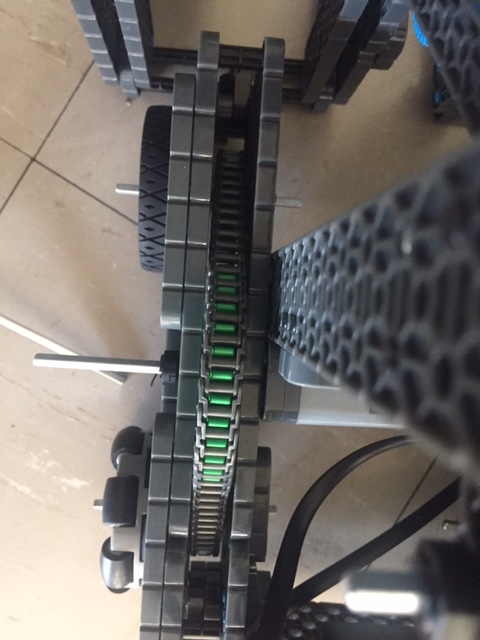 Not sure exactly what your control issues are…

It looks like your students are using traditional and omni-directional wheels, powered by one motor per side to power their bot. This kind of drive system (like the claw bot) is used in tanks and skid steers. It is not really suited for quick, precise movement. A fast bot using this system would likely be hard to control.

As to the bevel and differential gears, there is a lot of depth here. Maybe this info will help some…

Bevel gears are simply meant to allow 2 gears, mounted at right angles, to mesh. They change the direction of the motion, but as vex iq bevel gears are all 18-tooth gears, they do not really help with gear ratio by themselves.

Bevel gears, however, are very useful in differential gears. Differentials allow one drive motor to power two wheels that (because of the diffetential) can rotate at different speeds. This makes handling and cornering smoother by allowing the inside wheel to spin slower than the outside wheel during a turn.

Likewise, the differential can shift power between the two linked output wheels. When one is under load, power will automatically transfer to the one under less load. Look up Apalrd in the vex iq forum; he has some excellent examples of differentials in use.

They can even be used to allow 2 motors to power the same wheel, indepently or in combination. Differentials are very versatile and can certainly help with handling/control of fast bots. May take a little research, but we encourage that!

I would start by looking at the example images on the vex iq product page for diffetentials. You might also want to search the Web and this forum for even more examples.

Attached (first 3 photos) are pics of another application that I built. Three motors and three differentials were used. Each motor turned its corresponding differential at a different speed. (2:1, 1:1, and 1:2) The power was transferred through all three by the small 12-tooth gears linking the entire system to create a kind of transmission. Only two wheels (opposite / diagonal) are actually powered, but the differentials allowed that power to “shift” between wheels as needed.

By powering each motor seperately, I got three speeds. When multiple motors were powered in combination, forward and reverse, I got the torque of multiple motors and even more speeds. Slow and powerful, to very fast!

The last photos are of a more traditional AWD vehicle similar to Apalrd’s. Not very fast, but it does use diffetentials. 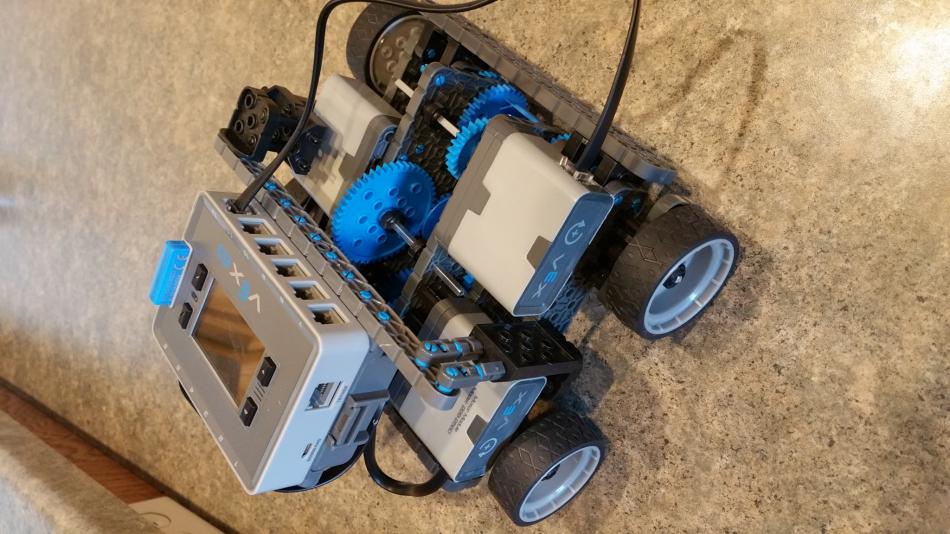 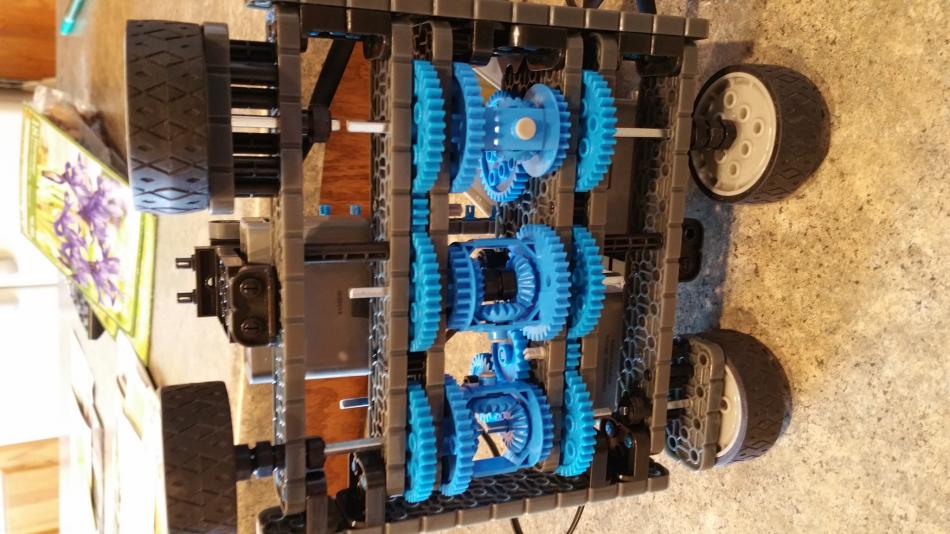 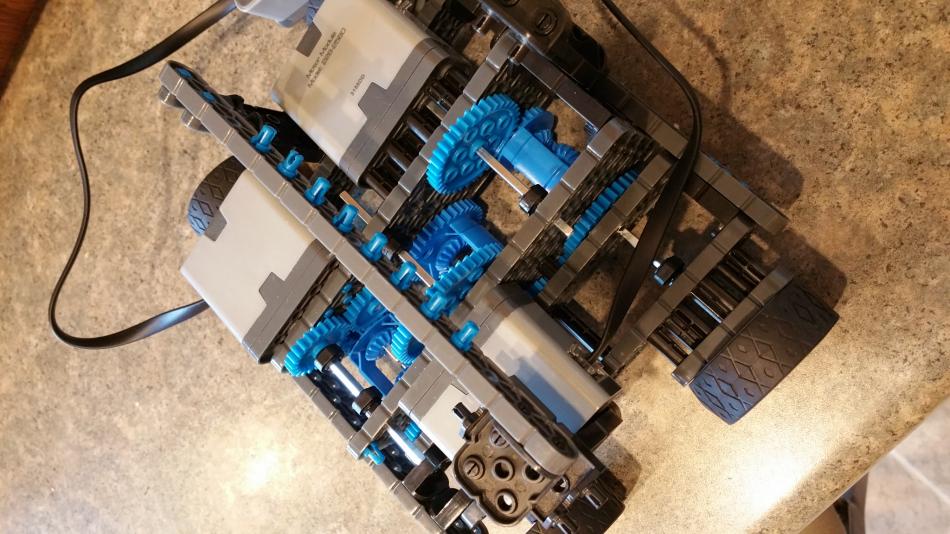 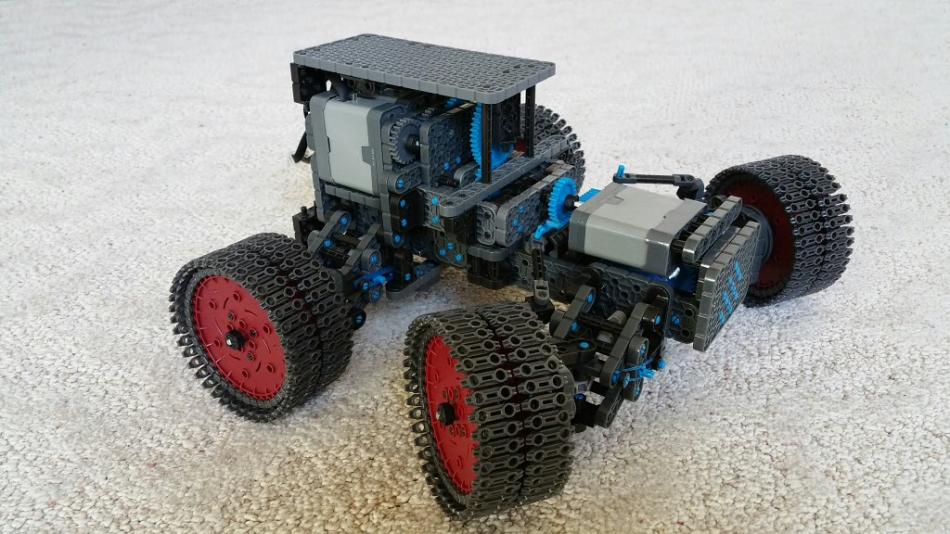 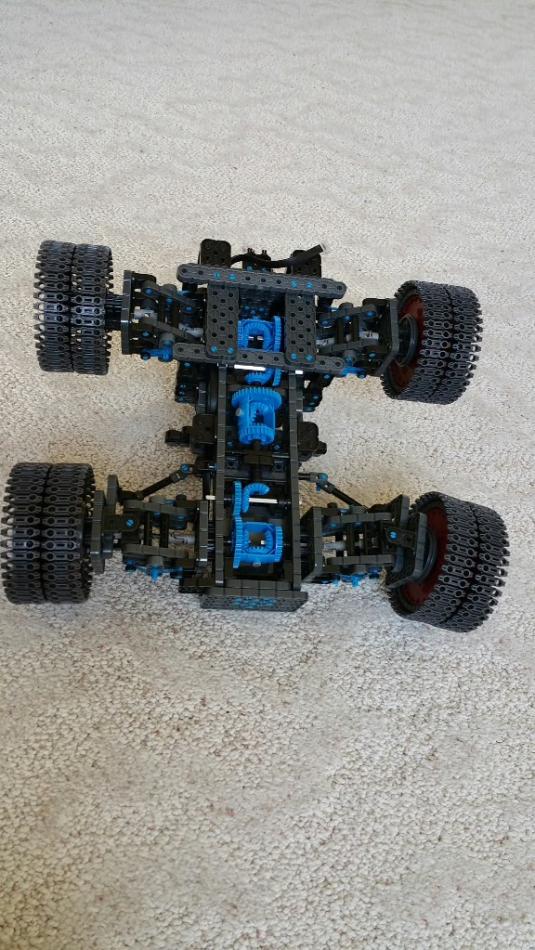 This helps a lot!

I really appreciate you sharing!

Glad to help. Also, I was thinking…

I did write a program for a two-wheel bot using Modkit. It uses the Pythagorean thermom to calculate motor velocity based on the position of a single joysyick. It required separate if statements for each of the four quadrants on the coordinate plane, but was pretty intuitive. Might work well with a faster bot because the stick position controls speed as well as direction. If interested, and if you use Modkit, let me know.

@Vexatron I understand this post is over a year old but I was wondering if you still had the code for this robot. I am interested in seeing the code and getting the robot to work.
Thank you.

Iceskier~
Yes, I still have the code. You can see it in action in my post here:

I should be able to get you something after the holiday weekend. Meanwhile, thanks for asking - it’s nice to know that someone still reads these older posts!

Hey Iceskier~
I created a new post about this code: