Does the platform includes the black supporting structure? Would a stray ring leaning on that structure prevent it from balancing

In the official Q&A, the platform is defined as follows in the screenshot

The definition of balanced is…

Since the platform is the entire structure, and any field elements or robots touching the structure cannot touch the field tiles or perimeter, or transitively touch them, would anything leaning up against the black tower stop the platform from meeting the definition of balanced?
It’s probably an obvious answer that I’m missing, but I’d rather clarify it and be certain.

Hopefully G3 (common sense) prevents this, but I think it is worth another q and a.

I was thinking the same thing

I think the notion that a ring touching the base of a perfectly balanced platform would cause it to no longer meet the definition of balanced would be dismissed simply by using common sense (g3). There will always be ambiguity in definitions like this, but it only becomes a problem when common sense cannot clearly and obviously determine what the correct interpretation is, such as the former issues with autonomous scoring.

I’m not sure, but I think they mean only the things from question 1 are part of the platform. They don’t specify the double hinge or the base in their answer, but do specify the colored PVC pipe and the black supports. This also lines up with the current platform definition where the entire platform is off the ground.

The answer’s wording is a bit vague though so the “black plastic parts” could also include the hinge and base which just loops back to your question.

They also said that they’d update the definition in a future manual update. I hope that’ll help

Even though G3 probably answers this, I still figured it would be good to ask since there’s another scenario pointed out in the manual where a mobile goal is transitively touching the platform and prevents the platform from being balanced or a robot from being elevated. 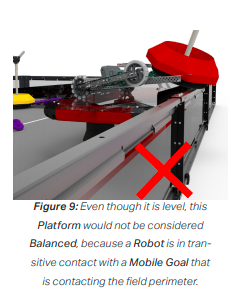 The second image is about elevation, but unless my understanding of the definition of balanced is incorrect, it’s essentially the same scenario as the first image. Also then would a mobile goal touching the underside of the clear plastic not prevent the platform from being balanced if the platform meets all other criteria of balanced?
.
The reason I bring these scenarios up is because it seems like it doesn’t take much to “unbalance” a platform, so I guess I’m not entirely sure where to draw the line of scrutinizing the rules and implementing G3 when in comes to defining a balanced platform.
.
Would it be safe to assume the transitive touch and balance criteria only applies to the see-saw part of the platform?