Does your team have a robot naming theme?

I came up with our robots name F7C and was wondering what other teams have if them even name their robots?

ours is named greg. We [my team] are his legs. We are nicknamed gregs legs. We support Greg.

Last year we had a modified clawbot (our first ever VEX robot), with AWD omni-drive and a really long claw that was a bit offset to the left, we named it T-26 because the offset reminded us of the Soviet T-26 tank.

This year, we just named our robot “The Hitchhiker” since the brain module was on the back and apparently it resembled a hitchhiker with a backpack? idk. The current name is different, but I’d be doxxing myself if I said it lmao

Yeah we have a pretty apparent naming theme. 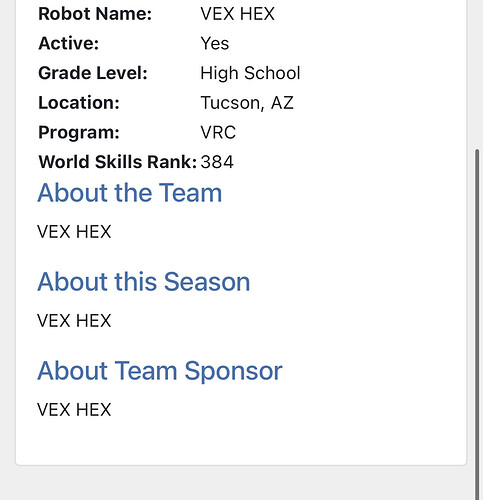 I’m not sure ben you might have to clarify your team name.

For us tho, we always based of what team letter we were in our org, we were breakdown for 2 years because our robot always broke, now we are Zeroth.

My students began a trend recently of using human names for their robots, and I have found it to be strangely hilarious!

Some robot names over the past few years include Cooper, Steve, Dave, Jerome D’Marcus, Debbie, Sinclaire, and Danny

Our robot name is liability. This is an i side joke because we have all of our own parts and electronics but we wanted to jon the school team so we were part of an org and would ve able to scrimage. But we couldenr join because we were a “liability” because if we worked on our bot at home and got injured the coach was terrified we would sue even thougb we all agreed to sighn wavers. Oh and did i mention that if we wanted to join we also had to donate all of our parts. So yeah thats how we got the robot name and becam independant team.

One of our sister teams named their robot “The Mistake”
They are a first year team, and keep comparing their robot to ours, and we are a senior team.

All our teams and robots have the same name.
But in previous years, we did used some sort of a theme or convention for the letters though.

We named ours Cold-Brew, after the coffee

you must be on Logan’s team I assume?

My last team had a robot naming theme of pizza. Last year was Jack Wants Pizza, after a member of our team, this year is Shaq Wants Pizza, and so on.
I moved away from this team, and my new team named ourselves The Council of Bens, because 3 of the members of our team are named Ben (including myself). In turn, our sister team named themselves Better than Bens.

Our team name has been the same for 7 years now. Our last three bots have had short and relatively normal names, Jeff, George, Fred. We can thank one of our more eccentric teammates for this.

Our team just found something that starts with H and is very silly, our team’s name is the hungry hungry hornets, and it was named after me since I like to eat a lot.

We´re a mexican team, and our robot are alwweays call “Moto-Moto” like the madagascar hipo. Without a real motive.

And the small robot is something related to that. Like Moto’s girlfirend and so…

Our robot’s name is Zeph, short for Zephyrus the disc thrower

Our robot is named Larold (3rd season of this). I’m not completely sure where this came from but we’ve kept it going. Our team name does change, but the robot name has been pretty constant.

We are the Quantum Mechanics (Guess Why) and our robots were named Alpha, Beta, Gamma, and Delta. Then, for some odd reason, Delta became Bread. Yeah, it’s our little dough boy. But, it’s still a compita. And don’t be so sourdough. Cause we’re gonna make the judges rye, trying to count up our points. Yep, you ciabatta be ready for a real yeast to take the field.