Our team is going to try out a DR4B and see if it’s more efficient and build it in less than a week and half.

Can anyone supply how the middle section works exactly?

What gear ratio does it need to be? We have every type of gear except those new high strength gears that came out this year.

This link should help you!
https://www.youtube.com/watch?v=yhlsRjKMrwE

Our team is going to try out a DR4B and see if it’s more efficient and build it in less than a week and half.

Can anyone supply how the middle section works exactly?

What gear ratio does it need to be? We have every type of gear except those new high strength gears that came out this year.

I am literally in the exact same boat as you. I had an elevator lift, and it was a total POS, so we scrapped it and we have state on the 20th. I am currently in the process of building of a dr4b too.

The way a dr4b works is that on the middle section, there are at least two gears that spin in opposite directions, making the arms swing away from each other, giving you height. You can have as many gears as you want, just make sure its an even number, and the gear ratio is the same.

For my middle section, I am using a 1x2x1x25 c-channel, with 84 tooth gears bolted to the upper bottom bars and lower top bars. In the middle I have 2 36 tooth gears. I don’t have any of the new high strength gears either, so I put gears on both sides of the c-channel. I would caution against bolting to the 60 tooth gears; they are very thin and we’ve broken the center out of one before. Most RD4B’s I have seen use a 1:7 gear ratio powered by 4 motors at the middle towers. Since you don’t have any HS 84 tooth gears, you could bolt two LS 84 tooth gears together (I would also suggest cutting the nubs off).

I have seen the gear arrangement in a few different ways.

[LIST]
*]****Putting the two HS (or doubled up LS) 84 tooth gears directly together with the pinion gears + motors on the top and bottom.

Now, if 1:7 is not enough for you, my B team this year had a successful 1:10 gear ratio which was very strong.

If you have any questions, P.M me!

Can anyone supply a close up of the gearing? Because I get the picture but if we use 4 motors I don’t see why we need 4 gears per side. I just wanted to be able to gear the entire robot by tommorrow.

I have seen a 1:5 gear ratio work on 1 robot. However, they could only lift one cube with a simple hook. It was very very very lightweight to get it to work correctly. I would not recommend anything lower than a 1:7.

Also, I do not currently have the robot to take pictures of. But, you might be able to get a clean look off of one of our videos on our YouTube channel. WARNING! Do not follow the gearing setup based off of this video: https://www.youtube.com/watch?v=SiMxLSA_mJA . There is far too much friction involved with using so many 12t pinion gears together.

If I do a 1:7 with an all aluminum body will two cubes even be an issue? Our scissor lift you could hear the struggle but no so sure about DR4B.

Last question, do they remain pretty stable without sensors keeping it straight? We will be using sensors but don’t want to have it to where it only stays stable if the sensors work.

Thanks for the help Jarred! Your robot looks sweet

If I do a 1:7 with an all aluminum body will two cubes even be an issue? Our scissor lift you could hear the struggle but no so sure about DR4B.

Last question, do they remain pretty stable without sensors keeping it straight? We will be using sensors but don’t want to have it to where it only stays stable if the sensors work.

Thanks for the help Jarred! Your robot looks sweet

Thank you! with a 1:7, using rubber bands, lifting two cubes is not a problem. to give you an idea you can check out this video however, with a full battery and proper rubber banding we have found that it lifts MUCH better than in this video.

When it comes to keeping the lift level, it really depends on your build quality. If everything is 100% perfect, you won’t need any sensors, however with our RD4B, stabilization was needed but we temporarily decreased the power in one side to keep it level.

Don’t know how much it would help but our reveal video has a couple of closeups of our lift, imght help you out a bit.

One of the teams from our school, 5776, used an rd4b with a 5:1 gear ratio and they could lift 2 cubes perfectly fine too.

Team 5776Y I will admit I do love the way you did your peg intake honestly.

Btw on that video of you Jarred, was the battery low or was it literally like almost dead fully?

I will work on gear ratios tomorrow and post what I got if it worked great or failed.

The battery indicator on the controller showed orange, but comparing it to when i was driving earlier today, it might as well have been nearly fully dead.

I’m on 5776, and I just thought it should be noted that our 5:1 lift was powered by 6 motors just as our Y team’s was. I doubt it would work well with 4 motors, although with 7:1 you should be fine, as long as you use a lot elastics on your lift. If you were interested in making one, there is a good image of the gearing on our team page. http://www.dvhsrobotics.com/Teams/5776

It still worked well with a basically dead battery.

So how much of a help is using 6 motors instead of 4 on the lift though?

I’m not quite sure what you’ve decided on so far, but I’ll try offer a bit of help using some pictures from one of the teams I mentor (with their permission of course).

Essentially, the best way to think of a Reverse Double 4-Bar is as 2 separate 4-bars. They can be powered completely separately (which I have seen a few teams do for a bit more arm control), but are commonly found to be linked together- either through a mechanical linkage or through gears. Because they are linked together you can choose whether you want to power the arm from the bottom tower (as you would on normal 4-bar) or at the mid-section of the lift (as has been common this season) or both (which is what the student did in my examples).

With the ratio you’re working on, keep in mind the arm is long and the game pieces (particularly cubes) are quite heavy. Because of these factors you’re going to need quite a bit of torque to lift. Simply look at what other teams have done this season. The most recent reveal being 169A/Y with their 4 motor 7:1 lift. Personally, I would recommend a 7:1 because it’s the highest ratio you can get before compound gearing, which creates unneeded complexity and weight, especially if you’re lifting from your middle towers.

The next stage is the bit you seem slightly confused over. How you drive the arm and fit the gears in. The diagram Oedipus Vex shared earlier is one way to do this- a couple of idle gears in the middle of the arm to keep your arms rotating the correct direction. If you do this make sure the idle gears are not pinions, even if they are directly driven because they create a large amount of friction. Another way to do it is to make one of your arms a 6-bar so that your arms are directly linked (no idle gears required). This is what I suggest and can be seen in my example images. With each idle gear you’re adding a bit of slop which can reduce your RD4B height and cause some issues with instability in a worst case scenario. To drive a direct system you’d have a motor attached to a 12-tooth pinion at the top and bottom on the outer side of the gear (this is shown in the example as well).

As you can see from the pictures linked.
-That robot is a 6 motor 7:1 lift.
-The first section uses a 6-bar the section section is a 4-bar.
-There is a large amount of bracing on the arms. This point is quite important as an under braced RD4B can be quite unstable.
-The student loves Nylocks much more than he should. Seriously, they’re used over the top in this example and add quite a bit of weight.
-Most of the arms are double jointed. This means that there is a support each side of them, which reduces wobble.

The amount of time taken to build this arm was… considerable and many things are quite a bit over the top. If you’re going to use it to base your arm off of, keep that in mind. When it was running on 4 motors (same ratio) it could still lift 3 cubes.

Hopefully this has been helpful for you. Any questions just ask.

As seen, 7:1 with 4 motors works fine, even with 3 cubes on heavier intakes, as for 5:1 you /may/ be able to get it to work with 4 motors. However it would be pointless, motors get slower as they exert more torque, so it would be just as slow as a 7:1 while not being less safe. How to attach the 2 other motors is also important, in our 5:1 6 motor lift all the gears were inline, this adds a fair amount of slop compared to how our Y team did it, with two motors powering the same 84 tooth gear.

Welshkiwi, thanks that will help alot! I was thinking of doing two on the middle of the lift and one motor on the bottom of the lift.

However, they both work.

Like others said, build quality is one of the big factors of success. The connection of the lower arms and stability of the front towers is critical to minimizing twisting.

Also, knowing when to use steel vs Aluminum is another help. Steel twists less and makes for a nice heavy base.

One of my teams have abandoned the double reverse 4 (or 6 bar) due to tipping problems. Others made their bases nice and heavy to help prevent tipping. Others abandoned scissors due to lateral stability at heights. As you’ve seen from other videos, teams get it to work.

But it took a few weeks to get the dr4b right…

This is all I had got done today, does the amount of gap in the middle even matter? 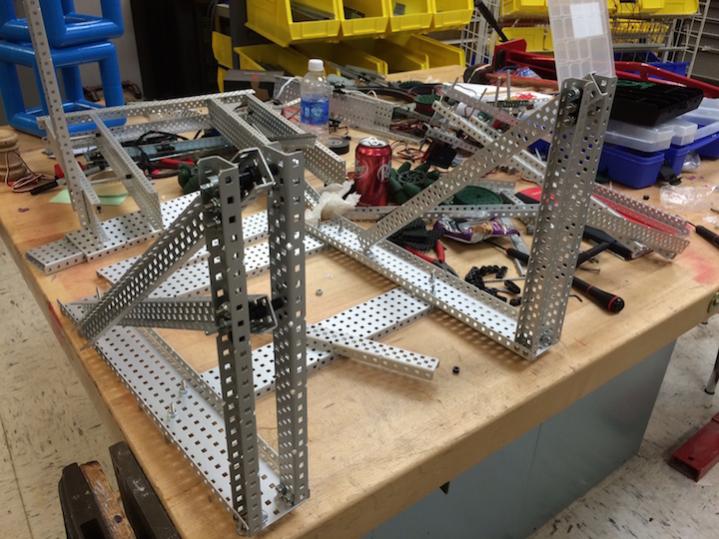 The gap between the arms? You want the arms to be a whole number of holes apart for cross bracing and easy intake attachment, although I wouldn’t call it strictly necessary. I would also recommend you use a screw with a locknut instead of an axle to minimize the amount the arm can wiggle.

I will add bolts tomorrow when I get time hopefully.