So my team is making a DR4B lift for the first time. Are there any tips on how you guys would recommend powering it, mounting it, and keeping it structurally secure? That’s what I feel the hardest parts of the DR4B lift would be, and I would appreciate any tips you guys have. Also, what is the best way to maximize the amount of weight it can pick up? I suppose one of the best ideas would be to rubber band it to help the motors, but if there is a better way to help the motors on the lift please let me know.

There are tutorial videos online on youtube such as this one:


And the basic principle of the DR4B:

Furthermore to enhance the power, you should use elastics to make it easier to lift a load
Perhaps this video may help, although the orientation is wrong:

Use screw joints on every joint other than the two directly powered by the motors.

Yes that will definitely help. What about mounting it to the base? Any specific way to mount it that works very well?

Ideally with either a standoff or a half c-channel that forms a triangle between the tower and the drivetrain.

ah yes of course, the all mighty triangle is the obvious choice.

Power the lift from the center. Sounds like a no brained but I didn’t do this in ITZ and I would not wish that pain upon some one else

So would you just directly connect the motors to the gears in the middle of the lift? I would imagine you would want some type of gear ratio to increase the torque wouldn’t you?

It should be powering a pinion gear meshed to the gear connected to the bottom linkage.

I should’ve been more clear, just look at any worlds level ITZ reveal and you’ll see. They power their oft from the center segment rather than the bottom and center segment. Generally, 1:5 (torque) works well with two motors and v5. However, I would use 1:7 (torque) because of the heavy load this year and v5 motors are so fast there’s no difference in speed that would be noticeable in a match

Okay Thank you, I see how that works now. Just out of curiosity but has there been anyone who has gotten a higher torque ratio than that 1:7 on a DR4B lift?

You could, but don’t. You will be in for a world of suffering if you try to use a compound gear ratio on a DR4B.

Space management. You have to make sure ur lift bars don’t interfere with the extra gear ratio. Seems easy but it really isn’t. U can power the lift from the center of the axle but honestly a compound ratio just seems like a bit too much when u can just use a 1:7

What happens if I place my gears between the two arms? Like this? 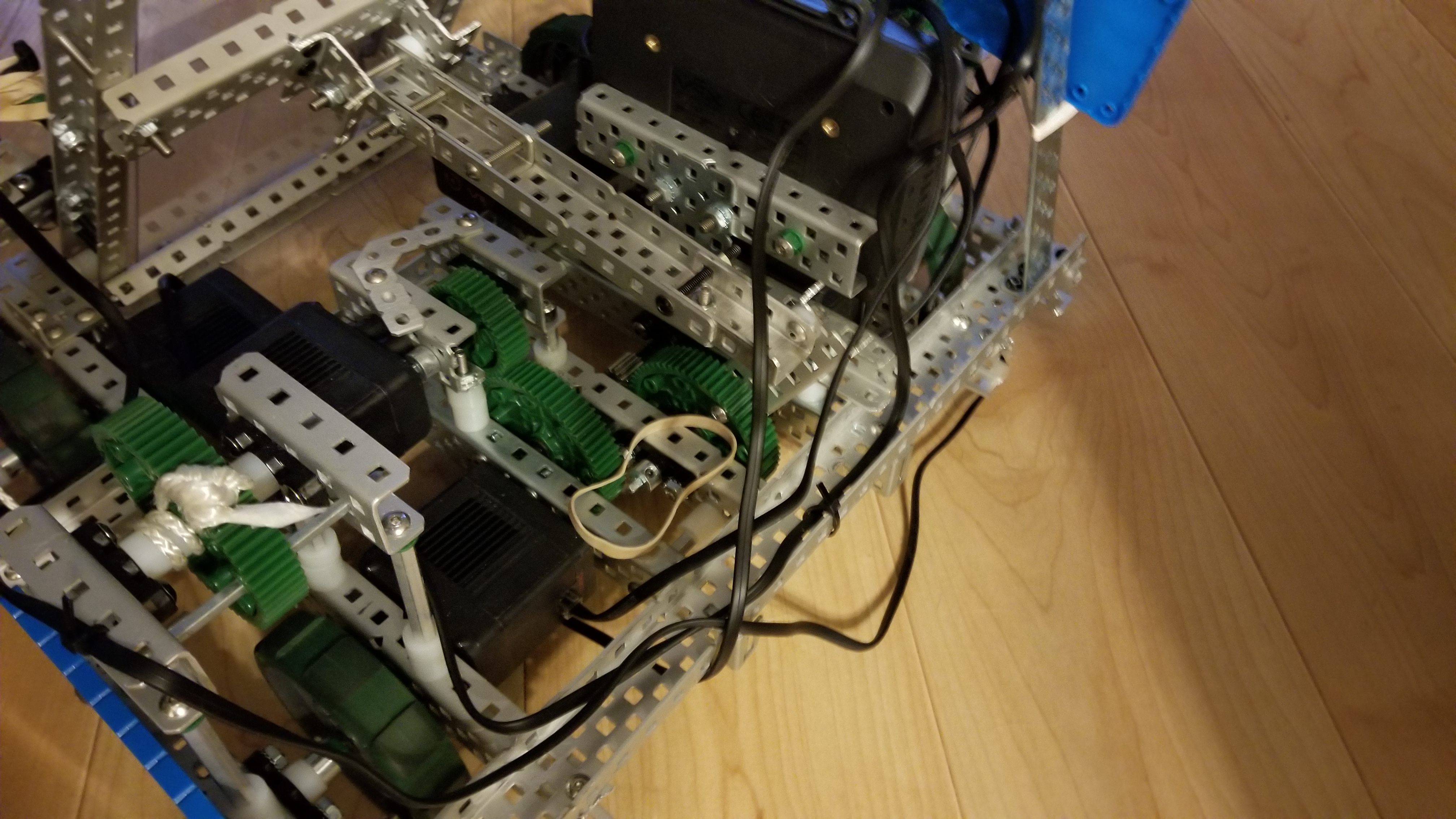 Edit: I’m referring to the tilter between the drive motors

Ok unrelated thing but is that your robot? And if so am I seeing full grip drive correctly?

WHY!!!
That’s not a good idea, it inhibits turning by increasing turning scrub, at least one set of omnis will be sooo much better, trust me, this is from experience

From what I’ve tested, it doesnt seem to affect turning as much, (I already took it to comp) since the wheelbase is so small. Also it makes for great resistance against pushing. The scrubby omni drives dont stand a chance lol. (Jk pls dont kill me)

But you are right, my next rebuild will probably use omnis instead

There are some things I agree and disagree within this thread. This really does depend. The main reason why my robot worked so well with one motor with 200 RPM and 1:7 gear ratio is because the lift, although looked bulky, was incredibly light (Seen in the reveal, they are using C-Channel Box bracing rather than X-Bracing, because it’s lighter and smaller) and the banding was tuned explicitly to be near linear with only two points. So, if you want your lift to be fast and only use one motor …