I’m a new builder in my team and I would like to consult the experts:

What would be better in drive systems: torque or speed?

At the moment, I am using a 5:3 ratio (I think) that is being driven by a two motors (one per side of the drive). So far, it has successfully driven. However recently, it has stopped working properly. During autonomous, it would stop working about 4 seconds in. We have replaced the battery with a fresh one, and the outcome was the same.

I am currently debating on changing the gear ratio to 3:5 to increase the torque or to make a new gear/sprocket system that uses two motors that is speed-based (I have a design, but I haven’t calculated the gear ratio yet).

If I were to replace my drive system with a new one, I would need to modify my current lift so it uses less motors; however our first scrimmage is on tuesday and I am pressed for time.

I would like some feedback if you guys don’t mind. 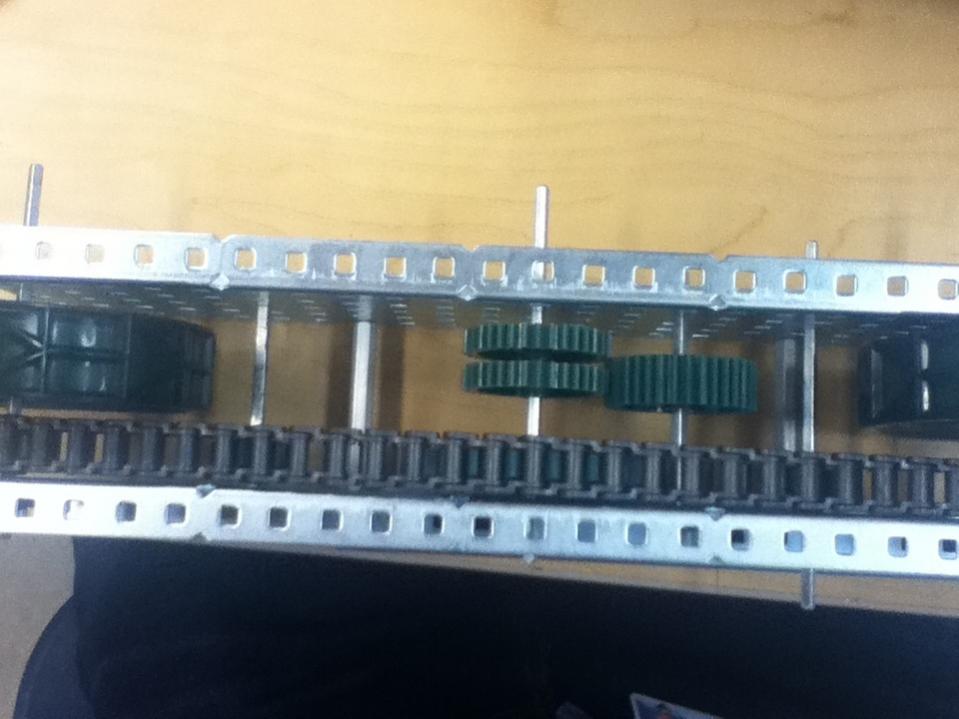 The wheels are hypothetical. They will be replaced by omniwheels in the final build.

Ok. I see your issues here.

If you need more help feel free to p.m me. I know how frustrating it can be sometimes

Actually, I planned to have Derlin Bearings in the axles, I was short in times when I made that, so I just focused on testing out the fit of the gear and sprockets.

Also, I should have added that I am doing an H-Drive, leaving me with only 4 on the lift and 1 on the intake.

Also, I should have added that I am doing an H-Drive, leaving me with only 4 on the lift and 1 on the intake.

My suggestion would be to convert to a tank drive so that the drive can have 4 motors going forward. This is pretty much a necessity, as you’ll find a 2 motor drive will stall chronically in matches due to the lack of torque.
If you really must have the ability to move sideways, try an X-drive or a mecanum drive. This allows you to use all 4 motors when traveling in any direction except diagonal.

Actually you need both: torque and speed. The 4-seconds-off-problem you are talking about usually means that the motors stall (they have an internal temperature sensor that will prevent them from overheating). Your drive is most likely putting a load on the motors that is to high. The motors will get hot and turn of to prevent damage. I would try it with a different gear ratio or more motors (don’t know if that’s possible or not).