Hey all! @Nomnomburger25 (You may know him from Concurrent) and I have been working really hard on this app over the past week, and we’re dying to show it to you! This is our first app written in Flutter, so go easy on our code, haha.

Elapse is a companion app built to be used during and off VRC competitions.

Vex Via already exists, however users may find it’s severely lacking in it’s ability to be used quickly and efficiently. It was with this in mind we created Elapse. Elapse was designed to be more user-friendly and have a more modern design than Vex Via. You can think of Elapse as a sort of “scouting companion”, where it makes no decisions on its own, but provides info for a scout. Other team members can use Elapse too, as it was also built to be as intuitive as possible.

Currently, the app is in an early alpha stage, where our main goals and design style is finalized, but we don’t even have half of our planned features added in yet. The current app is extremely barebones, but we wanted to get you informed, and to collect user feedback.

Our current and planned features are in our GIthub repository.

Currently, the apk (for android) is available for download from our Releases page. iOS support is coming soon, when we figure out how to build to it, lol.

This sure looks interesting. Might I ask what some of the planned features are? 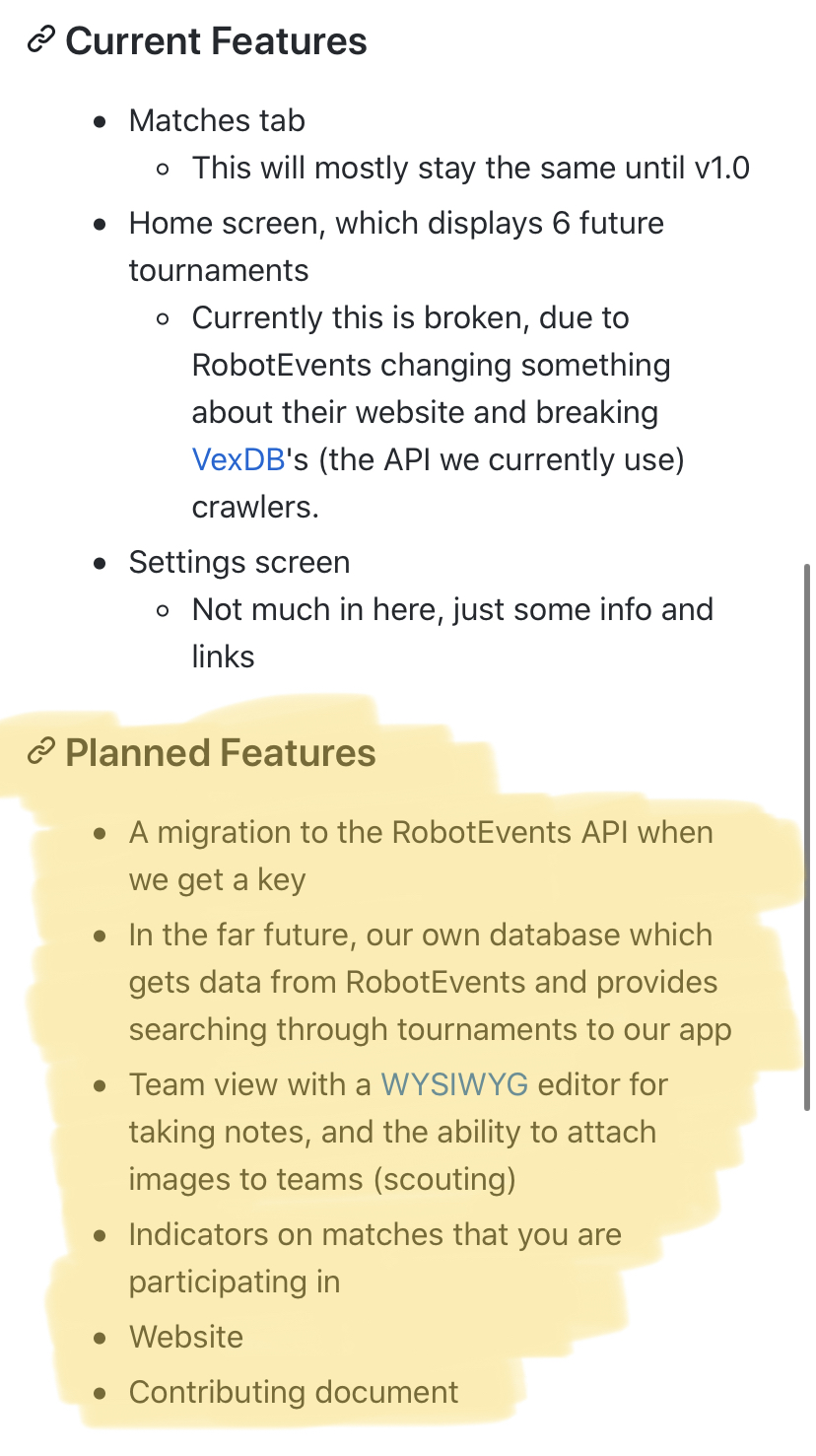 taken from the github page

Just wanted to give a quick update, currently the apk for android doesn’t work due to a SocketException, (not sure how that slipped by our radar), so in a bit we’ll be releasing v0.0.2 which has a fix for this bug.

yes, version 0.0.2 should be released within the next 15 minutes. v0.0.2 also fixes how some devices will show “app not installed” while attempting to install apk. This bug seemingly only affected devices with a higher Android SDK version. Sorry everyone for the bugs bro i love when the changelog says “potentially more”

I think a really neat feature would be allowing teams to put a bio for why you should pick them and info about their bot, auton(s), etc. This wouldn’t really be useful unless a lot of teams used it though.

I think a really neat feature would be allowing teams to put a bio for why you should pick them and info about their bot, auton(s), etc. This wouldn’t really be useful unless a lot of teams used it though.

That would require them to build their own server infrastructure…

@Barin I do have some experience with servers, the only problem is it may cost money and we are not financially prepared lol

It’s not that hard to build the server infrastructure on a small scale. But it is neither trivial nor cheap to deal with a large volume of users.

I could be wrong about this, but doesnt the RobotEvents API give team bios?

I could be wrong about this, but doesnt the RobotEvents API give team bios?

This is a good point. The API may not provide them, but it’s definitely possible to scrape a team page to get their bio.

Update
Version Alpha 0.0.3 is here!
New changes can be found in the release description.

Lots of new stuff in this alpha release! New text when no tournament is selected (schedule screen) Added 10 new tips (home screen) Shows a list of 5 past tournaments if team has no future tourname...

Android APK is in that link, in the asset section

Any chance the app will be put into the play store while in alpha?

@M3Rocks I think we will be putting open Beta on the Play Store.

Ok, it’s just my device is very locked down, and I was wondering when I would be able to use it.

It’s very easy to install custom APKs on virtually any Android device. Now, if your device has MDM (mobile device management, often used on company devices), that may be a different story…

My parents setup google family link on my device, so I cannot install apps from apks