End of Round Rules Question

My team and I were wondering what happens at the end of a round if our robot it touching the bottom ball in the goal. Is that ball still counted for pint air not? Thanks.

I also had a question similar to this. In this scenario the robot is on the red alliance. If the robot uses the blue ball to hold up the red ball at the end of the match outside of the goal. Would the red ball count? The red ball would be leaning into the cavity of the goal on the outside (some how) and be under the upper edge of the goal. It wouldn’t be touching the robot or the foam tiles, so it would qualify as being scored.

The only rules I think it doesn’t follow is SG7 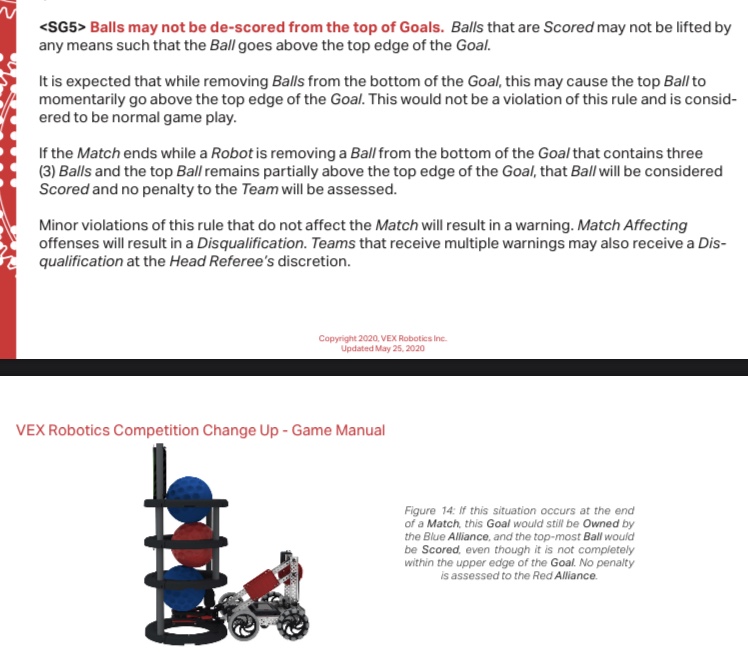 balls that are scored may not be lifted

Once it is scored it would be below the top of the goal. If it’s your own alliance’s ball your trying to score why would you want to descore it? In the scenario the ball would probably be the highest ball so there would be no reason to descore it.

What this rule is stating that balls may not be lifted to DESCORE balls out of the goals. Doesn’t say its illegal to lift a ball TO score it.

Doesn’t say its illegal to lift a ball TO score it.