Endgame tactics to earn the most points

We have consided options like strings that will shoot out in a spiderweb design but it has a risk of entanglement so that idea isn’t good. Scissor lifts are also not that good cos it will take up too much space in the internal space.

Have you considered dropping an anchor with string attached to it, and then driving around the field?

This is less susceptible for entanglement, and it allows for large areas of tile coverage. It also can be a relatively compact mechanism.

We have considered that but then the problem of ejecting and storing the string + anchor will be a problem as the space is needed for intake and flywheel.

Have you considered dropping an anchor with string attached to it, and then driving around the field?

Teams could just block you or wall you off with their own deployable extension. Imo, as long as teams are cognizant of not violating R4 during the match, string cannons will dominate endgame (although I bet we still might see some deployable walls for roller control and expansion blocking).

Mate, if you have deployable walls, its just dropping walls to block the robot right? The game manual does say you can’t have pieces dropping off your robot or disqualification. Just a reminder.

Nothing was said about them not being attached to your robot. As a VRC competitor, I would assume you are cognizant about not violating G5, and would know that a lot of string can go a long way…

Yes l understand the dangers of using string for endgame which is why maybe we could send out anti friction mats. Is it not allowed in the game manual? 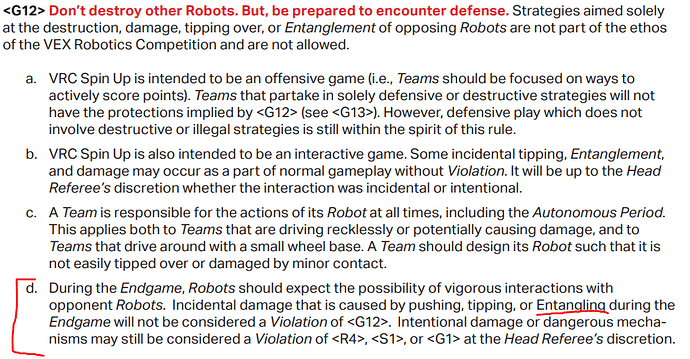 I would disagree. It says incidental damage will not be considered a violation, but dangerous mechanisms still may be.

Imo, as long as teams are cognizant of not violating R4 during the match, string cannons will dominate endgame

And another rule that people will need to be cognizant of (and one I haven’t seen talked about when string cannons come up) is SG3.

It doesn’t seem too hard to make a string cannon that shoots short enough to not hit the Net. The Net is behind the High Goal, after all.

Isn’t R4 a general robot rule, not just for tournament/games.

a string cannon would pose an unnecessary risk of entanglement, it wouldn’t pass inspection, even if the team doesn’t intend to use it outside of the endgame

Intent: “During this period, pretty much anything goes.”

Yay, let’s hope the GDC is on time this season!

The one thing I don’t understand is that R4 still stands right?

Aren’t string cannons dangerous mechanisms? I know that within the confines of the endgame period, entanglement and trapping don’t exist, so they would be legal during the endgame, but I don’t really see how a string cannon would pass inspection.

The Q&A only talks about how it’s legal in the endgame, yet mentions nothing about the actual inspection, where its stated “dangerous mechanisms may still be considered a violation of R4 at the Head Referee’s discretion”

I guess it would be a per competition thing, where depending on how the head referee sees it, a decision would be made, but I’d like to see some clarification on what a head ref should say, if they should allow a string cannon or not

The Q&A only talks about how it’s legal in the endgame, yet mentions nothing about the actual inspection, where its stated “dangerous mechanisms may still be considered a violation of R4 at the Head Referee’s discretion”

By the way, what @9MotorGang posted was, in fact, a direct quote from the Q&A.

Yes, I have global dark mode on my computer.

Yeah that makes sense, just a little weary about the wording, feels like something a team could bring up to try and get another team DQed

The vertical expansion limit persists in endgame. Any “canon” would have to keep its projectile below 18"… which makes it (relatively) safe for all but the shins of drive team members and refs.

That said, if the launch mechanism sent out a weight with force that trailed string, I would scrutinize it closely in inspection. At some point common sense will apply – if the force is great enough to potentially cause greater than incidental damage it could fail inspection. (Something I expect to get covered in Q&A once we see match play and some of the endgame solutions in action.)