I recently built a robot and encountered a size problem. I wanted to know if I could build a robot that’s footprint does not expand beyond the 13" by 20" limit. However, a ramp on my robot exceeds the limit. Would that be considered an expansion?

You may have to explain this more. Does the ramp move on your robot? If anything causes the robot (even part of the robot, like a ramp) to move outside the 13x20 limit, that is not allowed.

As long as your robot will always fit into the 13"x20" box, it doesn’t matter how it moves within that box.

A robot of size B can extend an arm (A). It must retract “A” before extending “C”.

Mahalo for answering our question. We thought the expansion would be “legal” but just wanted to make sure.

doesn’t just these robots looks like they violated the rules of expansions ?!

The robots in the video probably are legal. One of our teams has a similar robot where the scoop rotation is designed to never cause the robot to exceed a length of 20". If you carefully look at the field dimensions it becomes clear how long the different parts of the robot can be to allow for dumping. It’s all about geometry.

doesn’t just these robots looks like they violated the rules of expansions ?!
https://www.facebook.com/kaniala.kad…type=2&theater

So without having CIA level video tools ;-), it would be impossible to tell, but to me it seems that there is at least some concern on the legality of the design.

​The information below is Part 1 of the analysis and deals with the path of a lift arm from a pivot point. (be sure to try out the GeoGebra tool below). The general goal was to provide teams looking to go down this design path with some information and a tool to help their design. There should also be a second analysis that would deal with the distance from the fence to the Bank Shot net in relation to the length of the robot base.

The tip of the lift arm will then follow the circumference of a circle with radius AC and center point of A. It’s then fairly easy to see where the path of the arm will fall outside of the legal length.

I created a quick interactive tool that lets you adjust some of the parameters to help illustrate what i’m talking about on the GeoGebra website.
http://tube.geogebra.org/student/m2195443

here is a static image assuming maximum dimensions of 20" length and 15" starting height with a hypotenuse of 25".
Even if you reduce the length of the base to 17" and and bring the pivot height down to 13" the hypotenuse is still 21.4"

there are a number of assumptions that i didn’t list here and I spent some time on this, but it is in no way complete.
please, let me know if i missed anything.

A robot must always maintain the 13"x20" size requirement. The height can extend as high as the team would like after the game starts. There are some teams with ramps which extend and are retractable. However, the next step would be to convince the inspector that there are actual design features that do not allow the robots to accidentally expand beyond the size constraints. As an inspector at many IQ tournaments if a team could not convince me that the retractable extensions always work, I would not pass them. If this is your strategy I would suggest mechanical linkages that expand and extract the extention when your robot moves on it’s own. If students will need to press an additional button to expand or contract, then I would not pass them. Sorry.

yeah, it says nothing about expanding past a vertical limit… perfectly legal

Looking at Mr Toubans video above, those robots are clearly out of size limits. Looks like the same robot, two teams from same school maybe? But they are maxing out size before the top mounted arm and tray rotate forward and up. having built and tested very similar robots, I would say there is no way those robots are in size compliance. As the arm arcs upward the leading edge of the tray will be forward of 20" by a long margin. What teams are those? Did they get a win on those bots? No chance those are legal.

I agree with @vexmenbug and Mohammed Touban above, this is very likely an illegal design shown in the video, and further, the video claims to be a final match, so probably fairly consequential. It has continued to trouble me so I did some more sketches and calculations on ranges of values based on a 12 to 15 high inch tower pivot point placed between 16 to 18 inches back from the front plane, and an 16-18 inch radial arm / tray extension ( that arm tray combination may be much longer than that, but using a conservative estimate for a minimum calf). Based on the arm starting its range of motion even from 2 inches behind the forward plane, which is much more generous than the pictures show, there is no way these tray collecting robots do not swing an arc up through the forward plane of the measurement limitations.

There is just no way that a bot measuring 17 to 20 inches long, as these ones can be seen to on the field starting positions, can have a top pivoting arm arc forward and up from a 7 o’clock postion without violating the measurement constraints, there is just no way. If the bots were bottom pivot, it could be possible, but the video shows the dumping motion comes from the top of the bot and that that arm is reaching well above the height of the bucket which gives indication of the pivot point height and arm length.

These robots are taking a huge advantage by using radial range of motion to violate forward extension, and it seems to be overlooked by the judges in that region.

Will this be acceptable at worlds to violate the length constraint if the robot motion is on a arc toward an unlimited vertical dimension? It sends everyone back to the design cycle if there is a big loophole in the 20" constraint like this. I would love it, I just want to know. Because as it is, the robots in that video are in a finals match and there is no way they are not going beyond 20" in their range of motion. 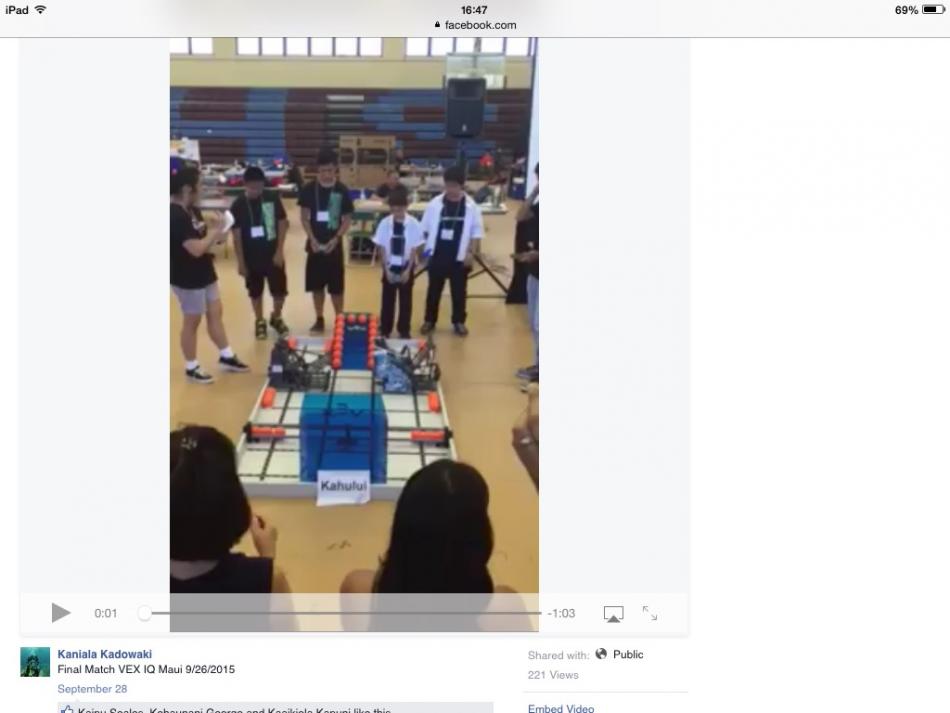 Not sure why the debate as this has been addressed in multiple threads: as long as no part of the bot ever goes outside of the 20 inches, it’s legal. The robots in this video are legal. It’s called knowing the rules and reading the clarifications in the forums that have been addressed!

We are hosting an event in a couple weeks and I’ve heard there are robots that resemble this design that will be attending - so I’m very concerned about how to inspect these robots. From my careful review of the rules and judges manual I’m inclined to agree with Melvin. Since both of these robots are clearly at the 20" maximum length during the starting position (per melvin’s screen shot) I would expect that when the arm raises the circular motion would bring the total length of the robot to 24" or so when the arm becomes level. Does anybody see any way these bots could be considered legal?

I think the only way these bot are NOT legal is if you put them in a box, and the arms can’t raise up. Or, when the arm is fully extended and it is outside the box. I also think most people are complaining about something without enough facts. Most of us have not seen how these robot actually fit into the 13x20 box.

When you are a judge, you should do your best to make sure the robots follow the rules, as you understand them.

are NOT legal is if you put them in a box, and the arms can’t raise up.

Thanks Steve. I think that’s a good way of looking at it. I think I’ll make a 20x13x15 inch box and have the inspectors ask the kids to operate their robot inside the box if there is any concern. It’s also a really helpful analogy for all us visual spacial learners…

A team in our area created a “box” that they used to check their robot. In one of our November tournaments, this box was used for inspections. A couple of robots, not all, with this design did not pass and the teams were left scrambling. BUT to my surprise, teams with designs based on the Clawbot or Linq did not pass as well. This left a few unbalance robots during the matches because the quick fix was to remove parts from the back or front.

I want teams to know that even if your robot looks small, check it!!! It’s not fun fixing a robot at a tournament because it didn’t pass inspection.

I don’t think either of this bots are over 20", if you look closely in the picture both have some space between the start of the robot and the end of the black line in front, and that space most likely it is to take into consideration the arc of movement while the arms raise to drop the balls.

What we have done to make sure our robot arc of movement does not pass the 20" Is we placed VEX IQ pieces to mark the starting position and it raises pretty high on both ends and then we move the arms to check it is still inside the 20".

At the Indiana State Championship events my inspectors will have boxes to check the starting size and verify that the 20" limit is not exceeded during normal operation. They will also get an email a couple weeks before the championship outlining how a few key issues will be handled so there should not need to be any last minute scrambling to make robots legal. I expect teams to come prepared to play by the rules.

Hey so one of the teams in the video actually made a promote video, (https://www.youtube.com/watch?v=kMprd8GTMvQ) fortunately with much more pixels

So I looked at the arc in much more detail. (Picture below) In the video, it can be clearly seen that the robot barely fits in the starting zone, so we know it’s at least 19 inches. My team currently uses a legal, working, dumper style robot like this, and from experience, I can tell you that it is impossible to stay legal if the robot is greater than 18 inches before the match even starts. I’m not at all saying that these types of robots are not possible, but I am saying that this team’s robot is not legal. They may have changed their robot since the tournament from the Facebook video, where the robot has holonomic drive and this robot doesn’t but they still they were seen competing with this design and that is not legal.

Tell me what you guys think about it? Is it legal? Not legal? Why? I might not be right on this one. 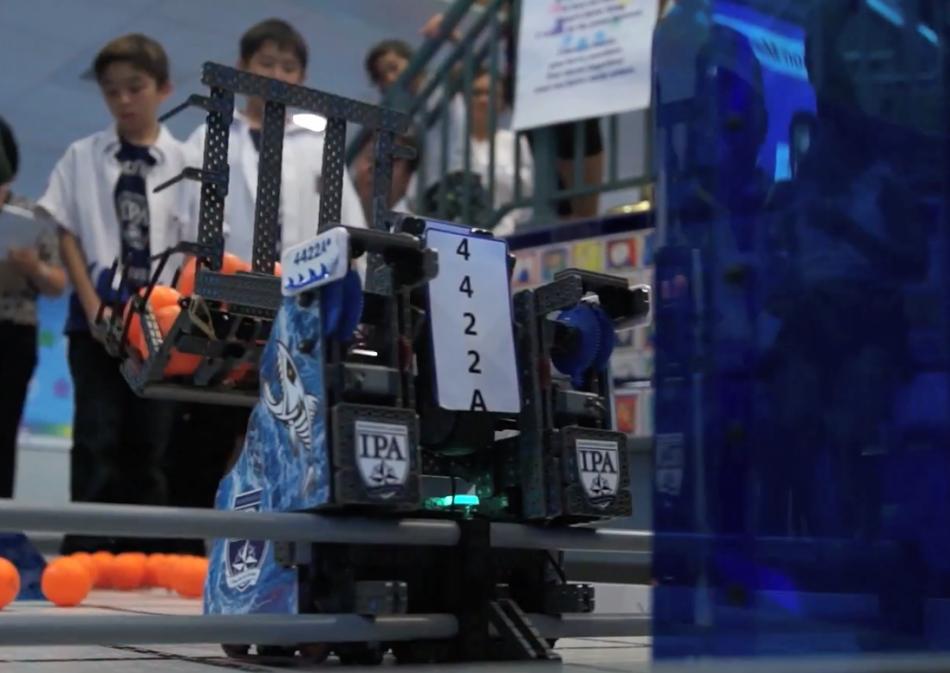