I had an idea for a different type of standoff. These have longer ends so it can stick through multiple plates and beams. It is most effective on the short standoffs because you can use the standoff connectors the a longer peg. The pictures show how they are used and why would you use them instead of other parts.
First Image: The top of each standoff group is the original, then the add-on come after. They can even take it a step further and make the extended part longer
Second Image: This is an example where this would be useful. This situation, something I encounter often, is showing the two current options to do this. The first one shows the pieces being separated by the standoff, like it should, but it doesn’t go through all the beams. The second one is showing the peg going though all the beams, but the top piece can be pushed down on the peg. The last one is the solutions I came up with, combing the two and using both of their strengths.
Third Image: Another helpful thing is that they can connect parts together easily instead of using all of your standoff connectors. This is showing the standoffs holding four pieces together at longer distances than regular pegs can. 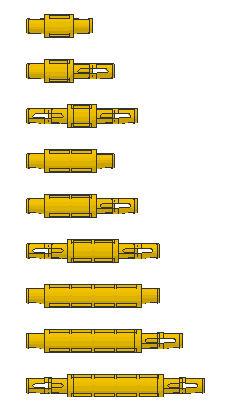 Thanks for the great suggestion! There have definitely been a few times where I’ve had a need for extended standoff parts like these when building VEX IQ robots. We’ve added this idea to our list of potential new kits to consider for the future.

In the interim period, you can create similar function parts with parts that already exist - the attached photo shows some examples. The small black connector shown in these photos is the 0.5x Pitch Standoff Extender (p/n 228-2500-109) and can be found in a few HEXBUG VEX Robotics kits, such as the Robotic Arm and the Hexcalator.