Could any vex oficial verify if this type of extruded aluminium is considered raw material, being that the only process of creation is extrusion. 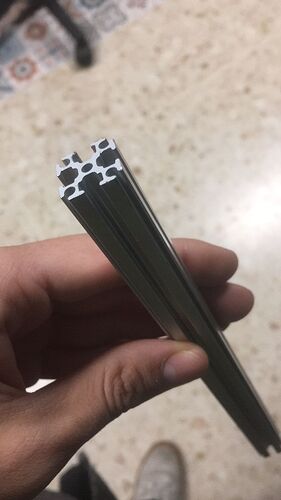 If you’re asking for VRC (HS/MS), then this material is not legal, as it is not sold on the vex webiste.

If you’re asking for VEX-U competition, the the current readiing of VUR4(a) would appear to allow that T-slot material. This is a change from VUR3 of last season’s game manual, where extrusions other than VEXPro extursions were excluded via the “red box” note.

If you are VEX-U, this one would be worth an official Q&A, since it represents a pretty major unannounced change from previous game manuals (and I’d like to know myself, because I can supply my U-team with tons of 80/20 scraps).

How can i do an official Q&A?

they asked for a specific example, so I gave them one in a new Q&A, just to be sure, since they were pretty adamant about T-slot being excluded in years past. Follow up to <VUR4> T-Slot Aluminum Question : Robot Events