The attached photos illustrate the damage to the playing field tiles observed following the BC Season Opener Tournament. While there may have been minor damage to the field tiles from previous year’s competitions, the general opinion of those dismantling the fields was that this was far worse than seen in previous years. The fact that the most severely damaged tiles were located near the fence, and that the white electrical tape was sliced in many locations confirms this opinion.

British Columbia teams in particular (but presumably elsewhere) should be aware that there will be an increased emphasis on rules S1 and R3 at tech inspection and by referees during the game. Please note that in R3 the term is “potentially damage playing field components”. If a tech inspector has any reason to suspect that your robot may POTENTIALLY damage the playing field, you may not be allowed to compete until the inspector is satisfied that your robot is compliant. Our definition of “potentially” just got much, much more strict.

If a referee observes your robot damaging the field, you may be immediately disabled, removed from the field, and not allowed to compete until tech inspectors are satisfied that you will no longer damage the field. (This might take a while… we’ll be looking really, really carefully.)

Please share this message with your colleagues, and please make our job easy at the next event. 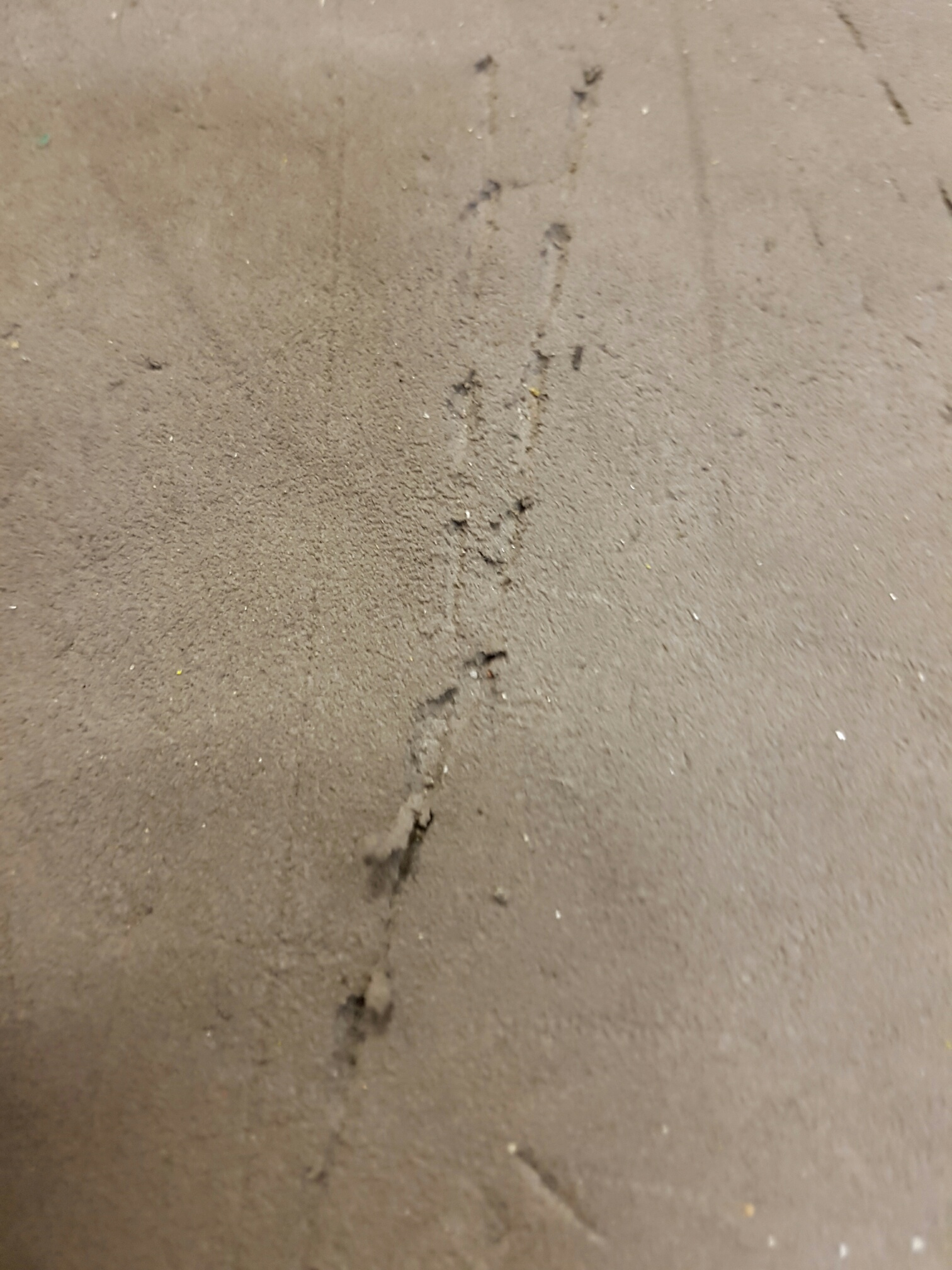 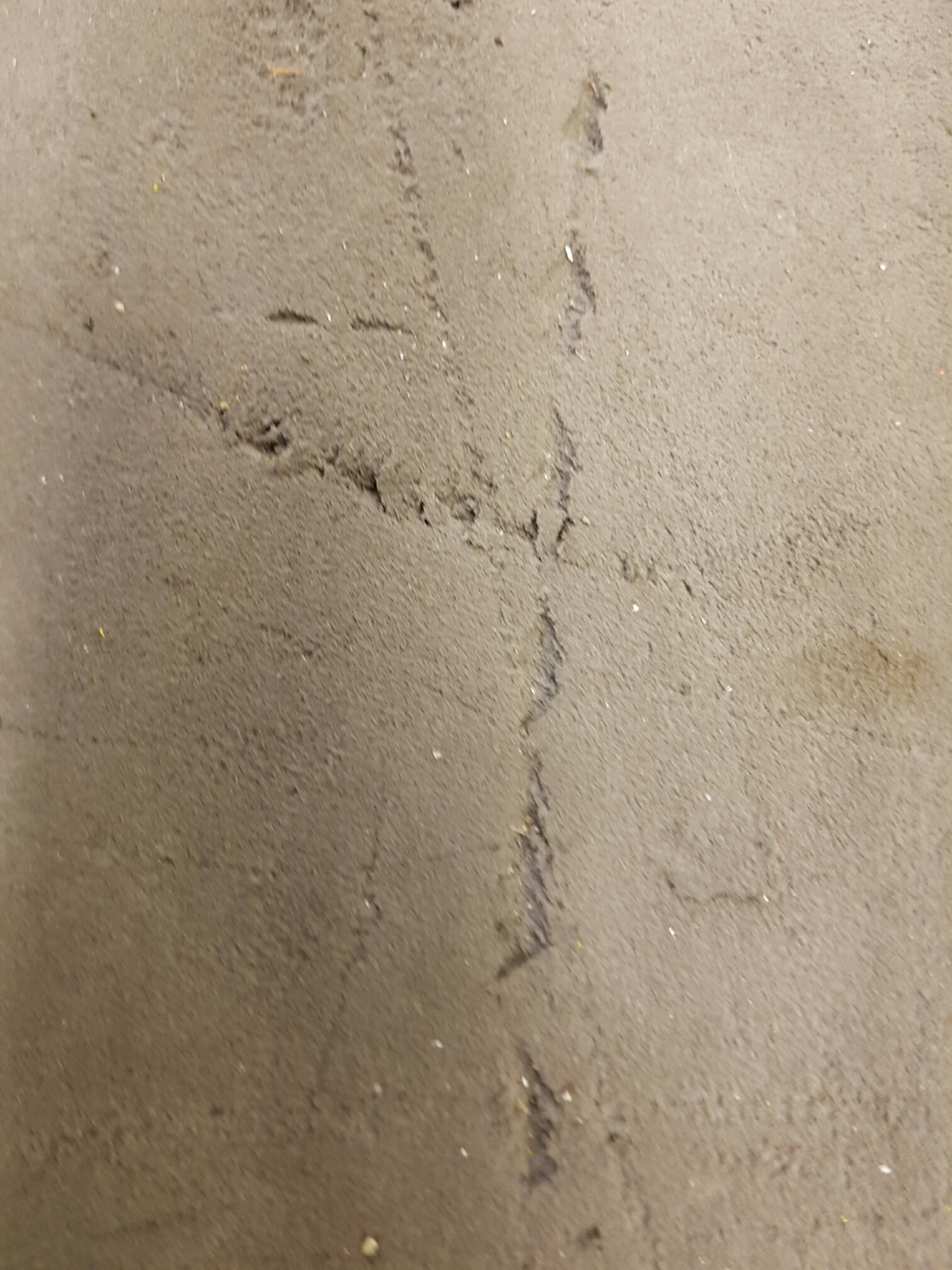 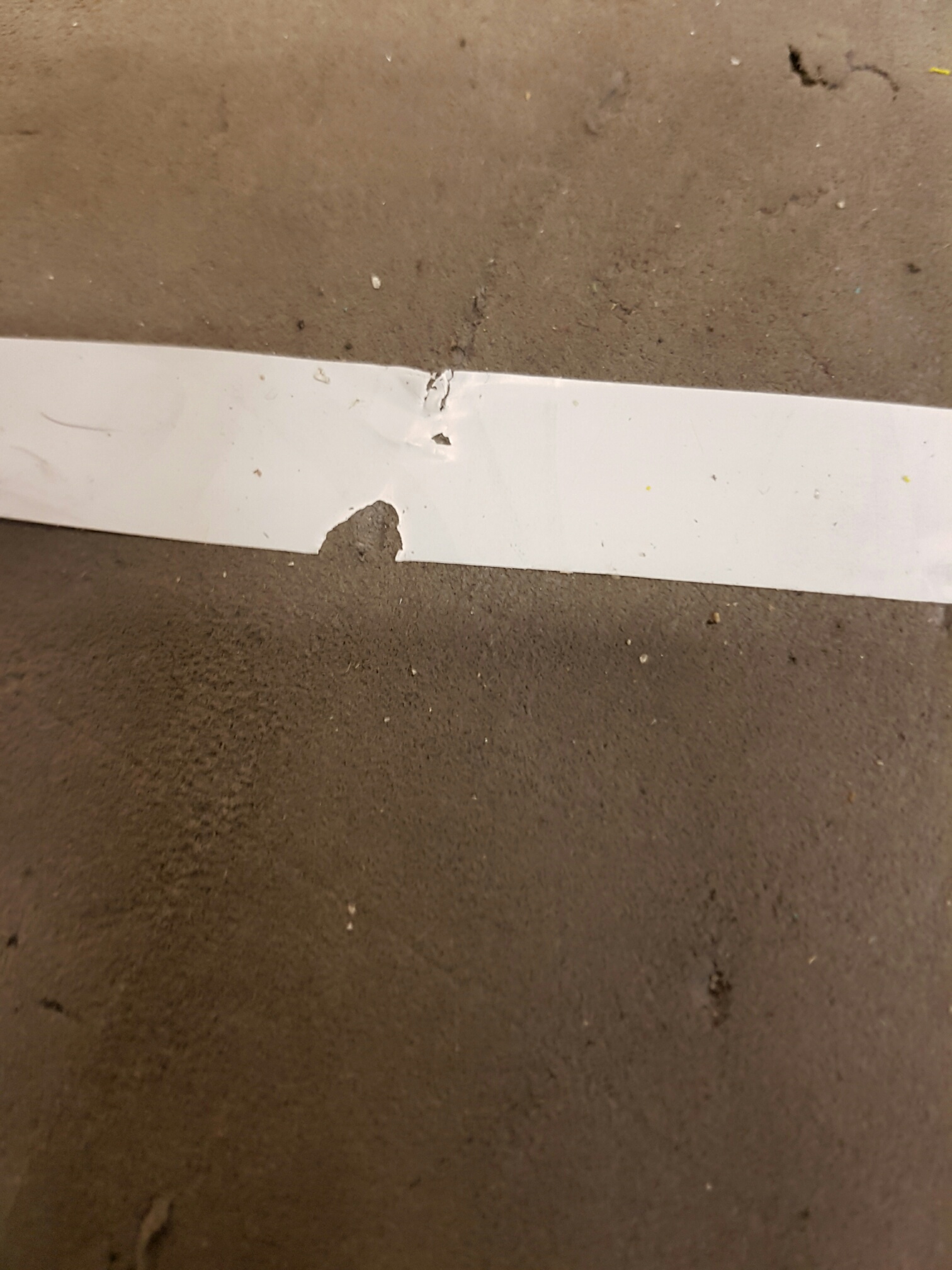 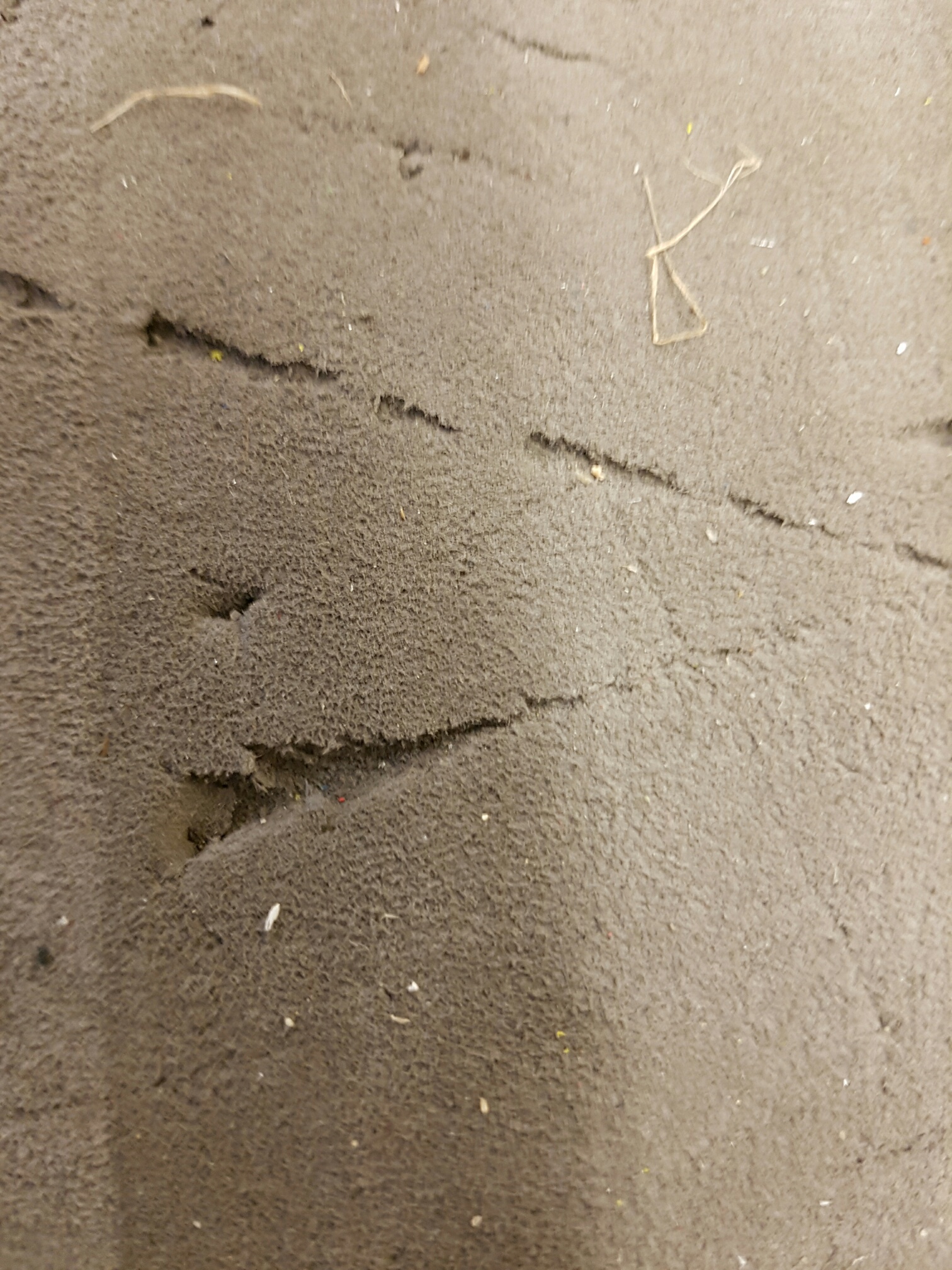 I can see claws doing some damage, while tipping forward

I can see claws doing some damage, while tipping forward

True. But if it’s not tipping, then it wont do that

Any thoughts on what caused it? Was is forks scraping the field or anti tip bars?

Any thoughts on what caused it? Was is forks scraping the field or anti tip bars?

I kind of have mixed feelings about this. It is kind of like putting soccer player on a soccer field and telling them not to ruin the grass - or golfers not to swing their clubs and dig up grass. I mean there’s a certain amount of collateral damage that’s going to occur in any sport. I’d be interested in a dialog about what is “too much” damage. Where to draw the line?

We can always add $10 per event to cover replacement field tile costs. But we like keeping costs low and not having to worry about replacements coming in time. We may have to charge more for replacement game elements. It’s not been in the budget but it should be.

They should make the tiles reversible! Then you could get twice the usage out of them. I get it that the tiles cost money - but perhaps that’s the cost of doing business. After all, in the sports analogy, someone has to cut, fertilize, and water the grass. The fields are our “grass.” And maybe the solution is to minimize damage from robots. Like I said, I’m torn on this.

It’s the cost of hosting a tournament. It would be nice if Vex offered single replacement tiles.

You can order individual tiles from softtiles (where Vex sources them from) but you can get slight variation in color and thickness due to age/wear/lot. A whole set is your best bet to get identical tiles. We are trying to replace tiles on a three-four year life cycle. Damage to tiles makes this difficult. (We have three competition fields currently)

Speaking as an event partner, you cut up my tiles, you don’t get to play. Simple enough…

Among other things, I have a feeling that standoff forks were mostly to blame for the field damage. Before we put screws at the end of our standoffs, our robot was constantly damaging our field tiles. The screws fixed the issue entirely, so I would suggest the same for other teams using standoffs as their intake.

Speaking as an event partner, you cut up my tiles, you don’t get to play. Simple enough…

For those who have focused on the cost of the damage, allow me to refocus your thoughts to rules S1 and R3. It’s not just the cost. The rules of the game say you aren’t allowed to do this. If we allow robots to damage the field, we may as well allow them to be over 18" wide or use 12V batteries. Sure, it might limit certain aspects of your robot’s performance, but think of it as being like Volkswagen and having to design your cars to meet emissions standards, even if you can get more power out of them by breaking those silly rules. (Oh, wait… bad example.)

Part of the engineering challenge is to build your robot within the rules, and the rules say, “Don’t damage the field.” Where to draw the line? If it damages the field, it’s breaking the rules. If it can potentially damage the field, it doesn’t pass tech. So make sure you’re building your robot within the rules. (And remember to not wear your soccer cleats on a golf green… there is no rule against damaging the turf, but there is against damaging the green.)

Well claws and side rollers, and maybe top rollers?..

This is really strange… there were lots of trays and standoff forks for SingVex too. But there wasn’t any significant damage to the field.

It may have been some of the low riding anti tipping mechanisms. I had to tweak mine quite a bit to get it to not scrape the tiles before the competition.
Also, there were a lot of robots falling over in the playoffs.

How sharp are everyone’s forks? Without video evidence, I personally doubt that the end of standoffs on forks caused this.

Karthik did say that game objects are expected to break and that teams should rarely be penalized. I know tiles aren’t game elements, but I would think the same should apply. S1 is meant to be used against teams that have designs that definitely cause damage to the field, not against teams that happen to accidentally damage the field once in a match at some point.

Instruction to inspectors to pay particular attention to sharp edges in areas that are likely to interact with the field tiles under load. This means EP will need to make sure you have capable inspectors to detect this.

At the middle school level, it is expected that their novice designs will interact with the field in bizarre ways. HS they need to be reminded this is important not to damage field tiles.

I am with others that wear and tear of the tiles is part of cost of doing business. VEX tile bundle does include four spare grey tiles. With the new field feet, tiles do not need to be cut. So it becomes easier to mix and match.

That said $230 is a hard to swallow at the beginning of the season before any revenue comes in.