I have a 35:1 external ratio with four torque motors powering it. I have velocity control implemented and tuned, yet our motors have been consistently stalling when running at higher speeds. This baffles me as I see groups with two turbo motors at 28:1 launching easily.

Also, when the ball contacts the flywheel at this speed, it generally just poops out, I’m guessing this is a compression issue but I have no idea where to shoot for. I’m wanting to be able to consistently score from the starting tile but can’t quite get there. Any help or suggestions would be appreciated, thanks!

How did you achieve a 28:1 ratio with torque motors? That is only possible with turbo motors, if you used the same gears with torque motors,the gear ratio would be 11.667:1, which is much to low. Also, your compression might be to much or to low, and check your flywheel for friction. Pictures would be helpful.

I was incorrect, my gear train is actually 35:1, it was late, I was tired haha. 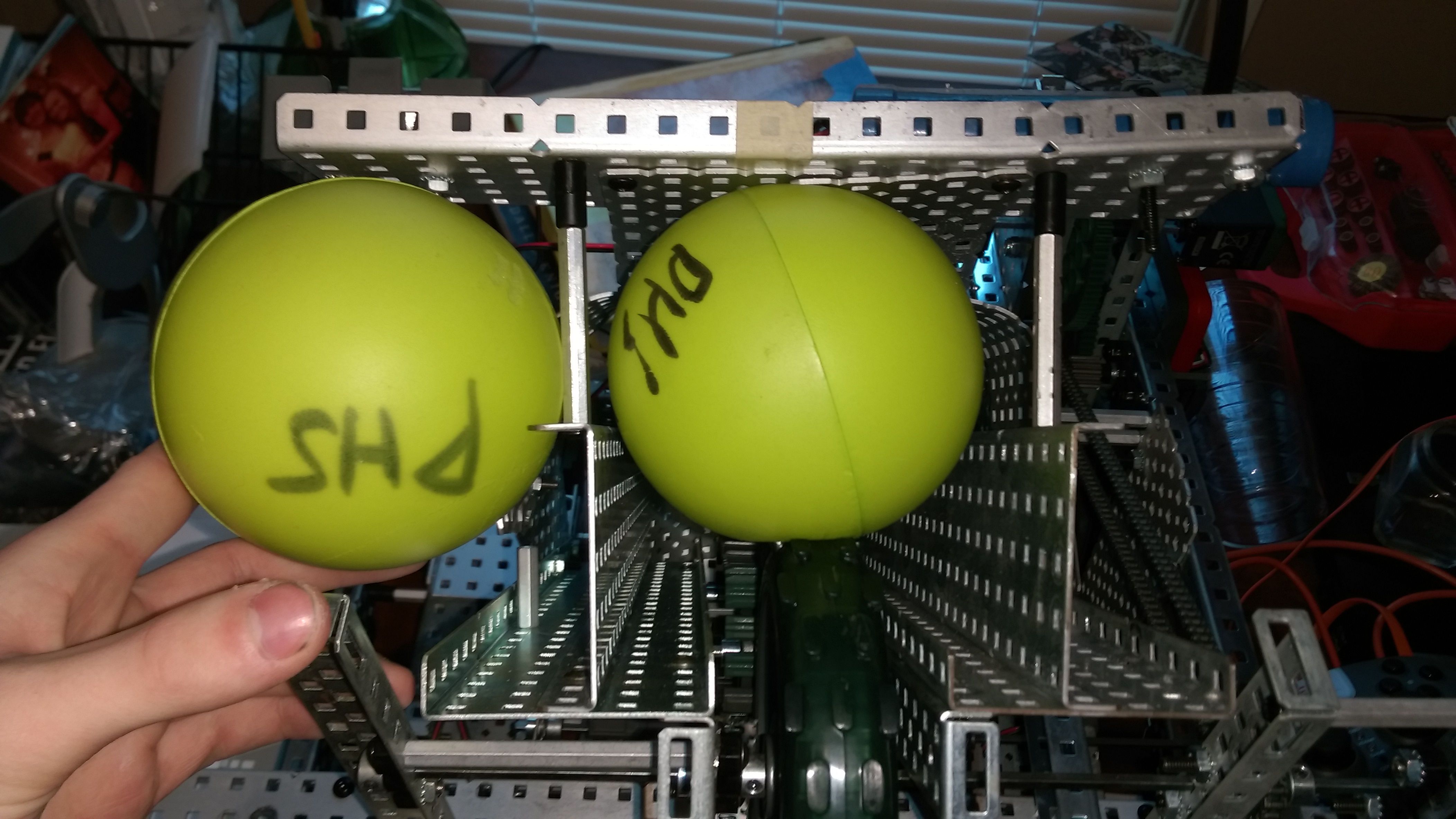 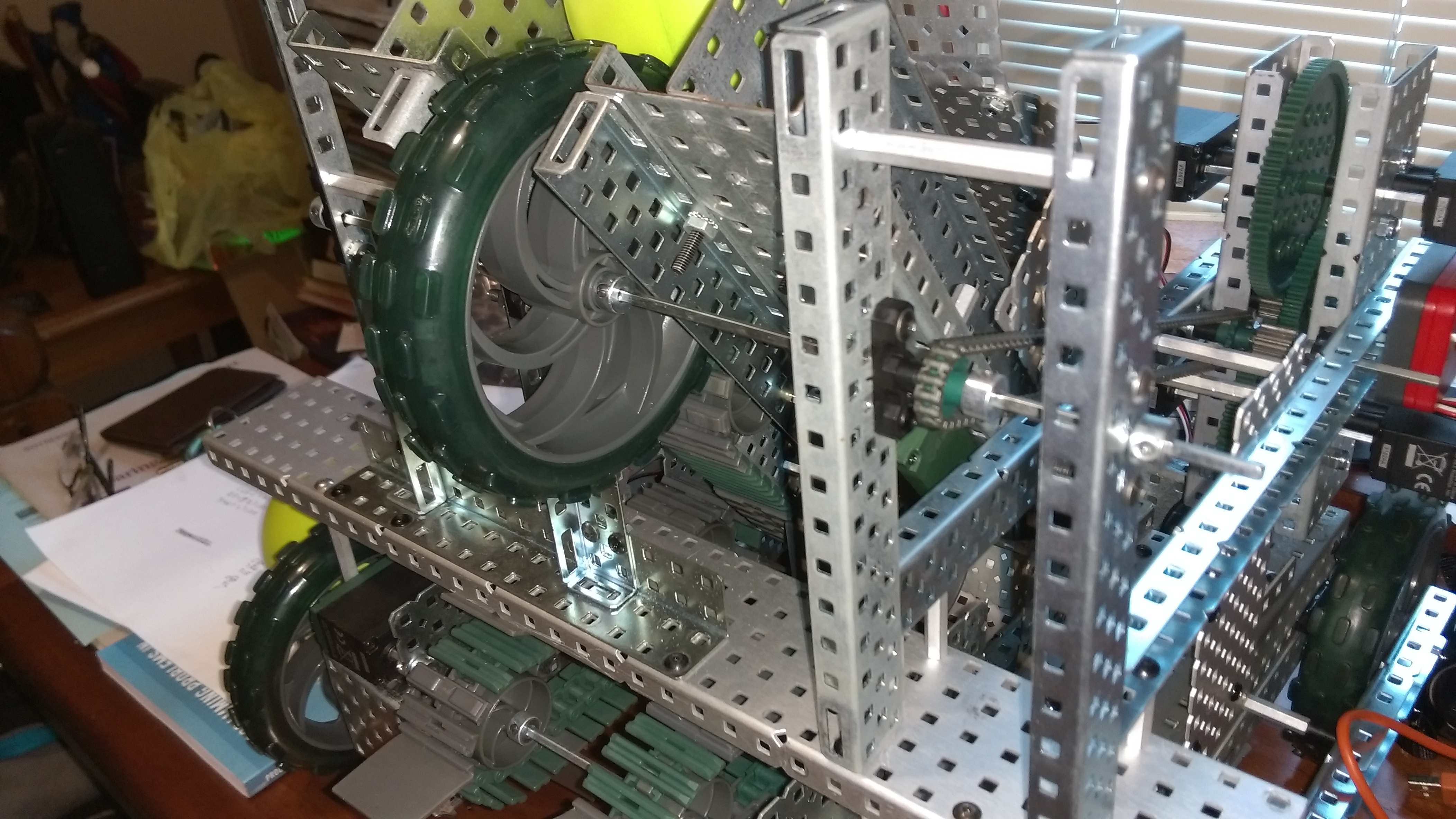 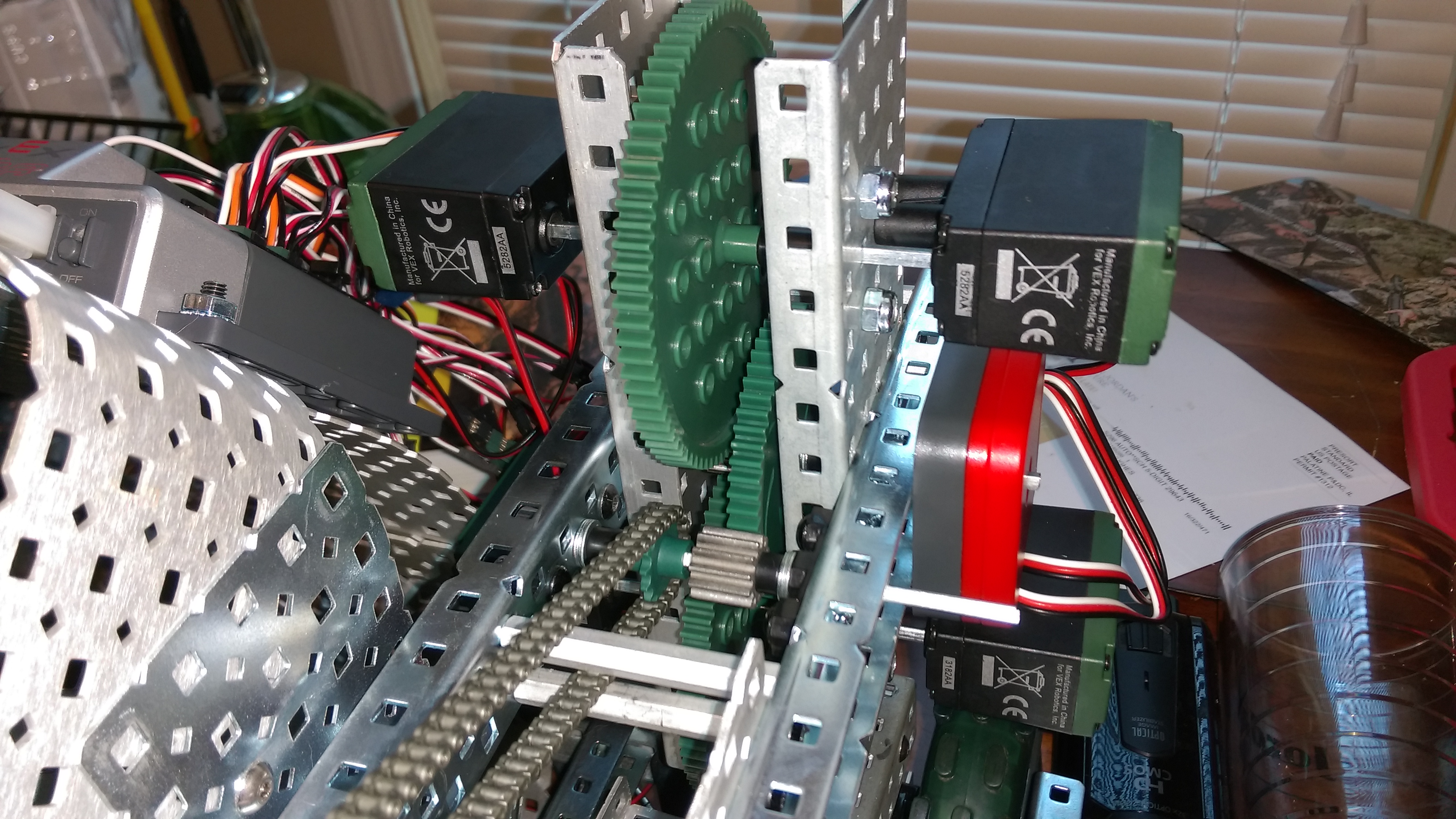 Your compression sounds like it’s too low. For compression, slowly increase it by one washer between tests. Shoot one hard ball and one soft ball. If either goes far enough, you’re close to a good spot. If the hard ball shoots farther, increase compression. If the soft ball shoots farther, reduce compression. Once they both go the same distance, and that distance is far enough, your compression is good.
Your stalling issue could be friction. 35:1 is really high; you can lower it. The motors can definitely pull it with minimal friction, but you might have too much friction for that. Check metal alignment, bearing flats (use them, they may need to be drilled out), axles (no bent ones), spacing (not too tight, leave a little wiggle room), and make sure all of your motors work. If one is broken, you might not be able to hear the bad gears when the other 3 motors are running, but it would not contribute to the power of the flywheel, instead becoming a cause of significant losses.

I adjusted my actual chain and all of a sudden the motors were running at max without any stalling, so my chain was way too tight, I added a good bit of links to it.

Regarding the compression, I lowered my flywheel one hole and I’m launching from midcourt quite consistently now. I’m going to try some increased compression and see how I shoot from there. At this point, compression seems to be all I need to tune.

Will update later after I’ve tested it. How would I check if a motors breaker is tripping or simply stalling? Or are those the same thing?

When the PTCs trip, the motor doesn’t receive enough power causing it to stall. There are two PTCs on the cortex, and one on the power expander.

When the PTCs trip, the motor doesn’t receive enough power causing it to stall. There are two PTCs on the cortex, and one on the power expander.

Okay, that’s what I thought, thanks!

Also, motors themselves have PTCs in them. The Cortex & power expander PTCs can supply up to 4A continuously, with occasional peaks over that okay. I’m not sure about motor PTCs, though.

I think this would have to do with my velocity control code but previously it worked fine, now it just starts to do that.

I am using a near exact version of jpearmans flywheel velocity control.
https://vexforum.com/t/flywheel-velocity-control/29892/1

you may want to ziptie your wheel, the rubber tends to warp a little bit at high speeds.

It sounds like you’ve been cursed. We had the exact same problem at our state tournament and we couldn’t figure out what was going on. The flywheel would ramp up to the desired speed but then the motors would start to fight each other and the gears would click, as we have still not figured out what the problem is with out launcher I can’t give you any advice that I guarantee will help (I don’t even know if were having the same problem!) but what I would suggest you do is to try and copy and past all of your program into a completely new file because sometimes the background work that RobotC does will backlog your program and cause weird problems.

Well, we for the most part fixed it but some errors still existed while we were at state we simply did not have time to tune out. It seemed to be that the motors were stalling, all but one. I greased the gears and the shafts and I was able to run it for 9 minutes straight until the motors overheated whereas previously it was thirty seconds.