would it be possable to make an atoumas flying robot using a vex robot and a regular rc airplane like this http://www.giantscaleplanes.com/Extra330-98.html ?

would it be possable to make an atoumas flying robot using a vex robot and a regular rc airplane like this http://www.giantscaleplanes.com/Extra330-98.html ?

I can’t prove a negative, but it doesn’t seem likely.
Google ardupilot for links to a community of builders of robotic drone aircraft.

Way ahead of you! 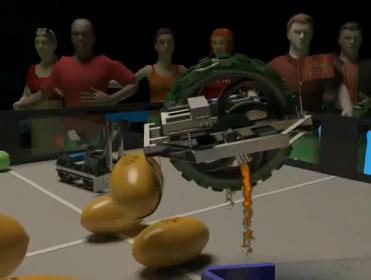 Vex is not what you would want to use to build a flying robot. First off there is no way the vex motors could produce enough power to go airborne and even if you did get a really powerful nitro engine the steel chassis would be too heavy. On top of that the micro controller is very large in comparison to other alternatives.

If you want to build an aerial drone you need to start by getting a somewhat decent model airplane and gutting the old electronics. From there you can add your own electronics. BTW that plane that you linked its BARE bones meaning you have to add 6 to 10 servos at close to $75 each and a motor which is gona be around $500+ for a plane like that along with the others stuff like fuel tanks ect… So you are not looking at $300 more like $1500 - $2000 just for the plane with no electronics.

This is one of my ultimate dreams/ideas right now. I looked online and found a single gas engine 250cc 8 ft wingspan model airplane for a few thousand bucks plus servos and some other internal stuff (fuel tank ect…). So for around 5k I could build the plane then comes the electronics he he he…a 40 mile x bee unit…25 mile wireless video system…gps…gyro…accelerometer…beagle board…compass…and so much more I cannot begin to describe what I could put in it… Just imagine having a satellite dish on your roof that tracks your drone in air to maintain a connection then in your room you could be remotely piloting a drone with a full video connection from over 20 miles away! Now to me that sounds REALLY awesome and my “command” center would be a full 3 monitor setup showing live gps data, video, and a joystick to fly with!!! Sounds impossible but I have all of the knowledge to build it if I could only get the darn cash…:mad:

I was int thinking of tacking a vex brain and attaching a vex brain to moters disened for an airplane of that scale so it could fly atoumus waypoints.

I wonder if its possible to us the wifi on your coumpter to connect to the vex net system?

If you communicate through the backpack for the transmitter over serial.

I wouldn’t use the vex net system if you wanted wifi or other methods of wireless connection. Use boards designed for that purpose like this one.

**Replacement:**[WRL-10050](http://www.sparkfun.com/products/10050). We've added some indicator LEDs and changed the layout to improve signal quality. This

After you configure it from a computer it can act as a tcp to serial adapter so if you send data over a tcp port it would convert it to serial data. Using this you could configure it to connect to any wifi network and by writing custom code to communicate with it (not that hard) you could send serial commands to your robot which in turn would control it.

This is much more complicated that the vexnet but it offers a lot of flexibility in what you can do with it.

Well. Actually, it is possible to make a flying vex… sort of. Using after market edf fans connected to a vex cortex I was able to make a hover craft. Vex really isnt the ideal choice for a flying vehicle because the batteries drain within 5 min. But using a power expander there is no shortage in power for the craft, given that hovercraft use very minimal thrust to lift it off the ground. But if one is trying to use vex motors to fly: there is no way.

Here is the video: http://youtu.be/EyRTLbaANcE
Any Comments?

Just stick with your traditional Styrofoam/plastic body and wings, and you can get a bundle pack of the flight controller, ESCs, servos, brushless motor(s), and remote.

Why did yall bump this super old thread? Flying vex would be cool though

The best flying vex is a self catapulting cortex. And that’s as close as you’d get to flying.

So, do you think the best alliance will be a Helo based sub hunter together with a fast attack bot?

Nah, more like a turbo blimp and a hs submarine.