Would using a single wheel for the flywheel be enough or would 2 wheels be the better way to shoot change-up balls?

I like to use 2 wheels because my flywheel is wider, but it is up to you. Also since this is change up we are talking about, you might want to change your tags to vex EDR instead of using IQ tags. That way you will be able to reach more people.

Yes i definitely think 2 wheels it will give you more traction since you have more surface area.

Single wheel is objectively better for this game, since there’s no height required.

You only get traction when contact is made. If there are two wheels instead of one, there isn’t necessary more contact being made (there probably isn’t).

no flywheels is best because the benefits you get from being able to make long range shots are outweighed by the downsides. flywheels have less efficient energy transfer in close range scoring, and a longer spinup time than just a roller to spit balls at close range does.

If you want more contact made use foam on the wheel and it will form the the ball. Then if you want even more just make 3 strips side by side but have the outer ones have one more layer than the center.

if for some reason you are set on making a long range flywheel however, I would suggest not actually using wheels, but using a large rubber band roller spinning at high speeds. I feel like the non-compliance of both the ball and the wheel, as well as the texture on the ball will create inconsistencies in firing. alternatively, you could use a wheel and then just pad it well with foam/antislip/rubber bands. I would only use one wheel because more wheels will just add to your spin-up time, and probably won’t provide any traction benefits.

This is true, but the problem with that is you get increased rolling resistance. More power losses due to a hysteresis loop.

Well yes. This is true. To be honest I don’t know much about fly wheels because I have never made one but that was just using common sense.

I’d like to mention that the key to flywheel design is not between deciding two flywheels or one (although, one “flywheel” is objectively better in this game particularly), but rather between either finding a balance in rolling resistance and traction, or exploiting the relation between viscoelastic hysteresis, tractive force, and frequency.

For many years it was seen as a fact that materials that increase traction also increase rolling resistance, while decreasing rolling resistance decreased traction (look at cars and trains- cars with traditional rubber compounds have high traction, but also high viscoelastic hysteresis. They lose a lot of energy to the constant rebounding of the tires against the road, while trains on the other hand are quite opposite. They use steel wheels on steel rails and have incredibly low rolling resistance, but almost no traction [note that this issue is cleverly mitigated by brilliant engineering. Trains use beveled wheels to get around curved tracks {as they can’t/don’t use a differential to change the wheel speed, hence leading to an obvious sliding problem if the wheels weren’t beveled}, spray compressed air mixed with sand in front of the wheels when accelerating to increase traction when necessary, and have flanges on the side that are used for a different purpose than many would suspect- instead of helping the train stop derailing, they are actually primarily there to prevent Hunting oscillation- something that would cause additional losses]).

Yet, in the recent decades it was discovered that there are some materials such as Silica-Silane enhanced natural rubber that are able to have both low rolling resistance and high traction, because of how the dependency on deformation for traction and rolling resistance differs at different frequencies for these materials, while for most traditional compounds their dependency is constant, leading to a high rolling resistance when theres high traction, and low traction when there’s low rolling resistance. I’m not going to give the final piece to the puzzle just yet (and I apologize for the long post), but I wanted to share some of this here because I’ve spent a lot of time researching this phenomenon and I think I found a way that this could actually be applied to vex.
Anyways if anyone has any questions feel free to ask in dm’s. I don’t wanna take this thread too much more off topic than I already did, but I think this is fairly relavent to flywheel design in general so I thought I’d bring it up

You want a single wheel. The only reason to use any more than one wheel is for an increase in mass. The flywheel has the capacity to store more energy when the flywheel has more mass at the top end speed. This is because angular momentum is conserved and momentum is proportional to mass. The trade off is a slower acceleration time, however, the v5 motor has enough torque to spin the wheel up to speed. This is only really desirable for long range shots because you need a significant amount of momentum to decrease oscillation between shots.

Contact area is somewhat irrelevant in this case because a flywheel really only has one point of contact with the ball regardless of how wide the flywheel is (generally speaking).

You DON’T need a flywheel with a large amount of mass in Change Up. This is mainly because the balls aren’t being launched a significant distance (relatively speaking), and you want quicker acceleration times to reach top speed between shots in order to increase consistency of shots (for obvious reasons I’d imagine).

TL;DR if you’re gonna use a flywheel, you don’t really need more than one wheel. If you want more contact area, just use rubber band rollers.

Edit: When I think of a flywheel in Change Up, I imagine it’s only running when at the goal zone unlike in NBN and TP where the flywheel ran throughout the match.

Me with 3 wheels thinking that there is no downside

It would be slightly less consistent actually. Unless both wheels are going at the exact same speed (which, to be fair, could be something fixed with a PID loop), the ball will not go straight. In this game however, this small path deviation is next to null and will not affect performance in the slightest- assuming everything else is on par. This is only really a problem when shooting from long distances, and is one of the reasons why many teams resorted to one wheel flywheels in tp and nbn, as it led to more consistent shots.

BTW, there’s nothing inherently wrong (other than it’s overkill for the distances of this game) with a three wheel flywheel. Just know that you can’t stop it once it starts on the match otherwise you’ll be at a significant disadvantage. Just for reference, when you say a three wheel flywheel, I’m thinking of something like this (note there are three wheels on this setup): 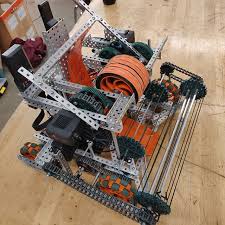