Hello, I just built a flywheel, and I think it is good. Any suggestions to make it better? 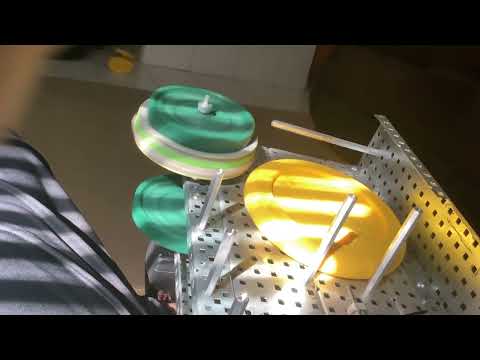 Any questions, feel free to ask.

It is quite difficult to do it, but adding a “hood” to keep the disk (pancake) contacting the flywheel longer would help your discs’ stability in flight and can even make the flywheel more accurate.

Also, you don’t have to sign your posts (your username and a link to your account is at the top left of each of your posts) - it looks like this:

How much power does the motor pull to keep the flywheel spinning? Reducing the amout of power nessary equates to a more power efficient flywheel and less overheating.

I would also highly suggest having a bearing on the top of the flywheel this should also help friction and stability.

A cover on top of where the disc goes to cause it to go where it’s aimed.

i would put a pice of c channel over top of the flywheel to support that axle on both sides. i would also use a VW indecer for pneumatic or swapping to a motorized indexer in order to decrease cycle time.

I don’t think he would know what that is.

Aside from that, I agree that you should have a c channel on top of your flywheel. You can see it wiggle around a lot when it spins so having that would add a lot of stability.

You probably don’t need to have a ratio as large as 7:1, especially since it looks like you’re using a 4-inch traction wheel. You’ll be better off with a 5:1 ratio on a 600 rpm cartridge. Most teams I’ve asked have stated that even at 5:1 their flywheels shoot over the entire field at max speed.

This topic has some videos of the concept (it’s a long thread, so scroll through it and find a video or two) - unless you have time to read it all:

Why do people keep talking about making turrets, I understand the benefits of having one but for vex it just seems unnecessary. lining up with x drive would take the same amount of time in my mind.

I would consider whether or not you want to use pneumatics anywhere else on your robot. Pneumatics are limited in uses, but having only one piston on your robot would let you use two tanks for it, which is more than enough air to last the entire match.
After all, this is the most repetitive motion in the game this year, so having something that can be used many times in a row is essential.

It is quite difficult to do it, but adding a “hood” to keep the disk (pancake) contacting the flywheel longer would help your discs’ stability in flight and can even make the flywheel more accurate.

IMO a “hood” is not a good idea at all and here’s why:

At most a flywheel should be 3000 with a 4 inch diameter wheel. We run ours at like 2200 most of the time, so we considered switching to a 48 to 12 gear ratio. You could also look at 1:1 cartriges, and should consider using a flexwheel on your flywheel for more grip. Our team has found the 45A works the best.

I would pursue a ratchet “puncher” type indexer if I were you. It has worked rly well for our team. (DM me if u need ideas)

A 3k rpm flywheel, very well constructed, will use 1-1.5 watts once up to speed. Moderate build quality will be 3.5-5 watts. Above that… and you need to rebuild your flywheel as it will overheat.

Hence the difficulty of pulling it off. If done properly (like in the videos I mentioned), it can launch the discs just as far, in not farther, and with extra accuracy.

It’s just worse. A normal flywheel at 3000 can shoot disks over the net from the other side of the field. We have to have ours at 85% for it to make it in at the other side in Auton

And, the only reason it was done in FTC is that teams only had to worry about relative disc acuraccy. As they only had to shoot the game elements into a hole in a wall from a defined place (firing line-closest legal shooting place to the goal) (and not into a goal where they need to stay there for the rest of the match), certain design choices could be made that don’t necessarily translate well into this season’s VRC game. And even still, with other games involving shot discs, these choices were not as prevalent as one might think.

Well then, you have me beat. I don’t know what else to suggest.

Weve used up all our motors already