At this point, most everyone is working on their flywheel. I’m seeing posts regarding people ordering flex wheels to use as flywheels, trying to decide on the hardness.

I’ve not seen this done (yet), but I would strongly suggest trying flex wheels, solid rubber wheels, and omni wheels… checking motor wattage for each. There’s the possibility that a team can use the wheel with the best efficiency and avoid having to use 2 motors.

So far, we have seen the superior balance of the solid rubber wheels help significantly, with launches exceeding the range of the flex wheels.

Additionally, shielding the sides of the wheel to prevent air drag should be investigated and quantified.

and avoid having to use 2 motors.

I don’t think one motor flywheels will be used by highly competitive teams. They will want a fast fire rate(like 3 discs in 1.5 secs) and with one motor at 3000+ rpms there just isnt enough torque to get that. Also if you do end up usingone less motor on the flywheel where would this be more purposeful at on the robot?

Torque doesn’t matter - it’s about inertia. I have a one motor flywheel that can consistently shoot three disks in about a second. this is accomplished though inertia. Using one less motor is a HUGE improvement because it allows for a six motor drivetrain.

So far, we have seen the superior balance of the solid rubber wheels help significantly, with launches exceeding the range of the flex wheels.

It’s about the compression: in your testing the difference in wheel size is the culprit of these results. I’ve done the same testing and found the exact opposite. 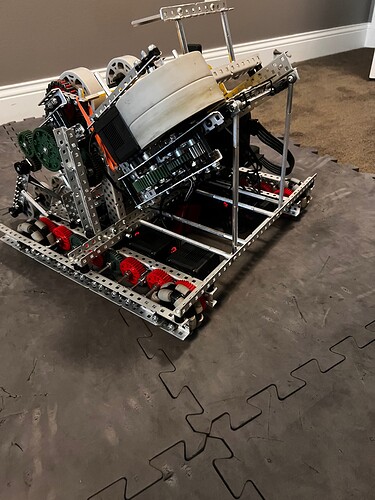 I’m not saying the followup posts are wrong, but you’re all missing the point.

Get some data. Backup your assertions. Make a notebook entry. Learn. Win excellence.

Capture RPM data before, during, after a launch. See exactly how long before the flywheel is >= critical RPM.

Friend of mine once used a dremel to polish nylon gear teeth on a non-vex application. That was the most quiet & smoothest geartrain I’ve ever seen and (not) heard.

Moment of inertia is still under the category of ‘inertia’, the tendency for mass to remain constant in its velocity, to resist changes in either a positive or negative acceleration, in a curved or linear path.

And we are still in the weeds regarding post #1.

Why does wind resistance for the wheel matter?

If your team is running your flywheel at 100% speed during the entire driver control, given the gear increase & rpm needed, that’s a large background/parasitic load.

Less power lost to air resistance = more power available to recover rpm after a launch and potentially the ability to function on only one motor or have spare power to run a ratchet for the indexer.

I indeed think that team can try and tune the flywheel for best performance possible.

The most important factor of a flywheel would be its spin up time and its recovery time, and they are mostly affected by the torque and moment of inertia (MOI). Reducing spin up and recovery time means that you are able to shoot more frequently.

The MOI of a flywheel is dependent on its mass, size and how the mass is distributed. The act of shooting a disk is essentially transferring energy from the flywheel to the disk. Since kinetic energy is equally to 0.5 * MOI * angular velocity^2, increasing the MOI of the flywheel means that you would lose less angular velocity after the shot, and therefore can get back to speed faster.

However, increasing the MOI does have its drawbacks. since as said earlier, torque is also related to MOI, increasing MOI would lower your angular acceleration. It is possible that at a point, the MOI is so large that even though less velocity is lost, the acceleration is so low that it still takes longer to recovery. Therefore, the relationship between torque, angular acceleration, and MOI should certainly be tested or calculated by teams to ensure optimal performance.

Another factor that can affect spin up and recovery time is the control loop (programming) you use. Since you are trying to control and maintain the velocity of the flywheel, having an effective, well tuned control loop can reduce the time needed for the flywheel to get up to speed and stabilize. Some of the most common control loops for flywheels I see in vex are PID (sometimes with feedforward and derivative filtering, take back half, and bang bang control. You can even try out things like state space control if you feel more advanced.

Overall, there are a lot of factors that go into making an effective flywheel. I would strongly suggest each team to test / analyze these factors in order to have the best flywheel possible.

Again… we are in the weeds.

All these items… are too complex to calculate given the variables at play and limited data teams possess.

They are, however, easy to measure with the sensors built into the motor and manifest themselves as 1) power used 2) rpm 3) time.

The title of the thread is ‘quantitative analysis’ NOT ‘qualitative’. Get a flywheel, write some code, capture some data, and THEN proceed w/ design decisions.

You wrote a whole bunch of words which ignore, among other things, wind drag on the flywheel itself, an item which is not negligible and the very subject of my post.

I have a one motor flywheel that can consistently shoot three disks in about a second.

I don’t thin Ian is going to leek his flywheel on the forums, but I can attest to this, as I have seen it.

@Vexation Ian already leeked his flywheel in this thread, and has seemed to be fine with leeking his robot in most places. Whether or not he posts more images/videos is up to him, but you shouldn’t assume that he isn’t going to post them.

fair ig, but I was talking about a video of the flywheel, as I have seen that he has already posted pictures.

If you are hoping to collect some broad data, perhaps create a table with data points you would think should be compared? Motors, gearing, wheel type, multiple types of motor sensor data, launch angle, launch distance, time between effective launches, etc. There could even be some qualitative elements about types of flywheel modifications or launch system construction. (But I do agree with your issue that some specific measured data points are what would provide the most use.)

Asking the community to provide measurable data is an interesting idea - but based on the response so far, you have to expect that the data will be hard to align between submissions without providing guidance.

To be honest, I don’t really know if we need to shoot 3 discs in 1.5 seconds. Word is you can only fit 15-20 discs in the goal, which means you only need 5 seconds per disk to fill up an entire goal in 1:35, more than is taken up by a 1 Motor flywheel. Since we don’t have a robot yet I don’t know though if a 1.5-2 second difference between discs will be the end of the world for a bully oriented strategy (where you just bully your opponent)

I’m trying to get everyone to take a hard look at their data. We saw A 20% drop in motor wattage by simply aligning the bearings and then tightening the assembly down while it was running.

This was never intended to be a thread about game strategy, launch angle, how many discs per second do you want to shoot, or all the other tons of questions that come up here.

This was simply to get people to take a look at the data itself coming out of the motor during the fly wheel operation. Steady minor refinements produce superior results, and you simply can’t do that without data.

We are achieving around 10 minutes of steady launches before the motors overheat, and our optimizations are not finished. I’m encouraging others to do the same.