Has anyone found an efficient way to create a “frictionless” joint, for example, as used in scissor lifts and 4-bar linkages? The attached is a cumbersome attempt to have 2 rods rotate about a pin, but it’s heavy, bulky, and has a lot of play that I can’t eliminate, since it depends on the collars being tight enough to not shift along the axle. I’m looking for something better.

I’ve gotten spoiled using LEGO’s frictionless pegs – 2 beams and a peg will do the trick. 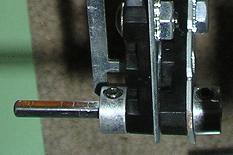 I’ve used the new Shoulder Screws to create such joints. They are much lighter than axle+collar joints, and you don’t need a bearing block for them since they fit the square holes well. Use a Nylock nut instead of a Keps nut, and shim the joint with the white plastic or thin metal washers to get it as tight as you want.

On our Clean-Sweep Robots, KTOR used a 1" standoff coupler with a nylock on one end through a bearing flat. The coupler was threaded into a standoff on the other side. Since the standoffs are all threaded to a fixed depth, this allowed us to adjust how tight we wanted to hinge, with a washer or two inserted between the standoff and the piece of metal that’s moving. These hinges ended up working fantastically well for us, and because of the round shape of the coupler and the tighter fit in the bearing flat, they were much smoother than the square shaft was. I’m not sure when our next meeting will be, but I’ll see if I can get a picture posted for you.

We generally use any size screw with the Nylock nuts, tightening them enough so that the structure stays stable, but loose enough to allow the joint to rotate freely. It works pretty well, but I’d imagine that the shoulder screws would provide the same type of joint in a little more structured way.

you could easily use hinges for some applications. For something like a scissor you would have to make it out of angle or add small angle brackets to the ends. You could cut the hinges so they are only one hole long as well. instead of the standard 5.

you could easily use hinges for some applications. For something like a scissor you would have to make it out of angle or add small angle brackets to the ends. You could cut the hinges so they are only one hole long as well. instead of the standard 5.

The hinges are certainly a great way to make some types of joints, but be careful when cutting them down. For a strong joint, you want at least three “knuckles”. If you have only two knuckles, the joint will have more play and may slide apart if not otherwise constrained. I think it would work fine to cut the Vex hinges in half (2.5 holes wide), but any narrower than that and you’ll have to really watch how you use it.

For four bars I generally just use Vex axles through bearing flats. They’re adequate for that kind of application.

I saw one team way back that managed to cut the tiniest little groove in their shaft for their collars that would better constrain axles like that.

I find if I’m looking for a joint for a scissor lift, I should be redesigning my robot to not use a scissor lift instead of trying to make one work.

The Nylock nuts worked very well – thanks for the great/cheap ideas! But the shoulder screws sound like a good investment for the long haul