Me and my team mates got onto the subject of using our TT bot for ITZ and somehow the name Zone Takeover came out. Half an hour later, we have completely mashed the games together to have qualities of both games. What are some of your fun compound game ideas and how would your bot work?

Turning Point and Nothing But Net. Basically, have a shooting range except instead of hitting targets you’re making hoops. The hoops will be hollow, so the balls can go back into the field, and they will also have basic counting electronics so by the end of the match the referees can count how many balls went through a specific colored hoop. Robots may also score points by placing caps on thin horizontal (not vertical) poles like the FRC steampunk game with the gears. But here’s a twist to the lifting part from nothing but net. Similar to CREATE division in 2016, if your team can LIFT the partner robot completely OUTSIDE the field and onto a “landing tile”, there will be an additional 75 points.

Nothing but Net and Starstruck. Each alliance is on one side of the fence, their goal is on the other.

Bridge battle and nothing but net. You have to shoot the balls into elevated bridges.

So glad you started this…

I have my IQ kids play a VRC-style game in the off time each year… 2 v. 2, 15 second auto with a 3 minute driver, switch controllers at each minute.

Not done, but so far: 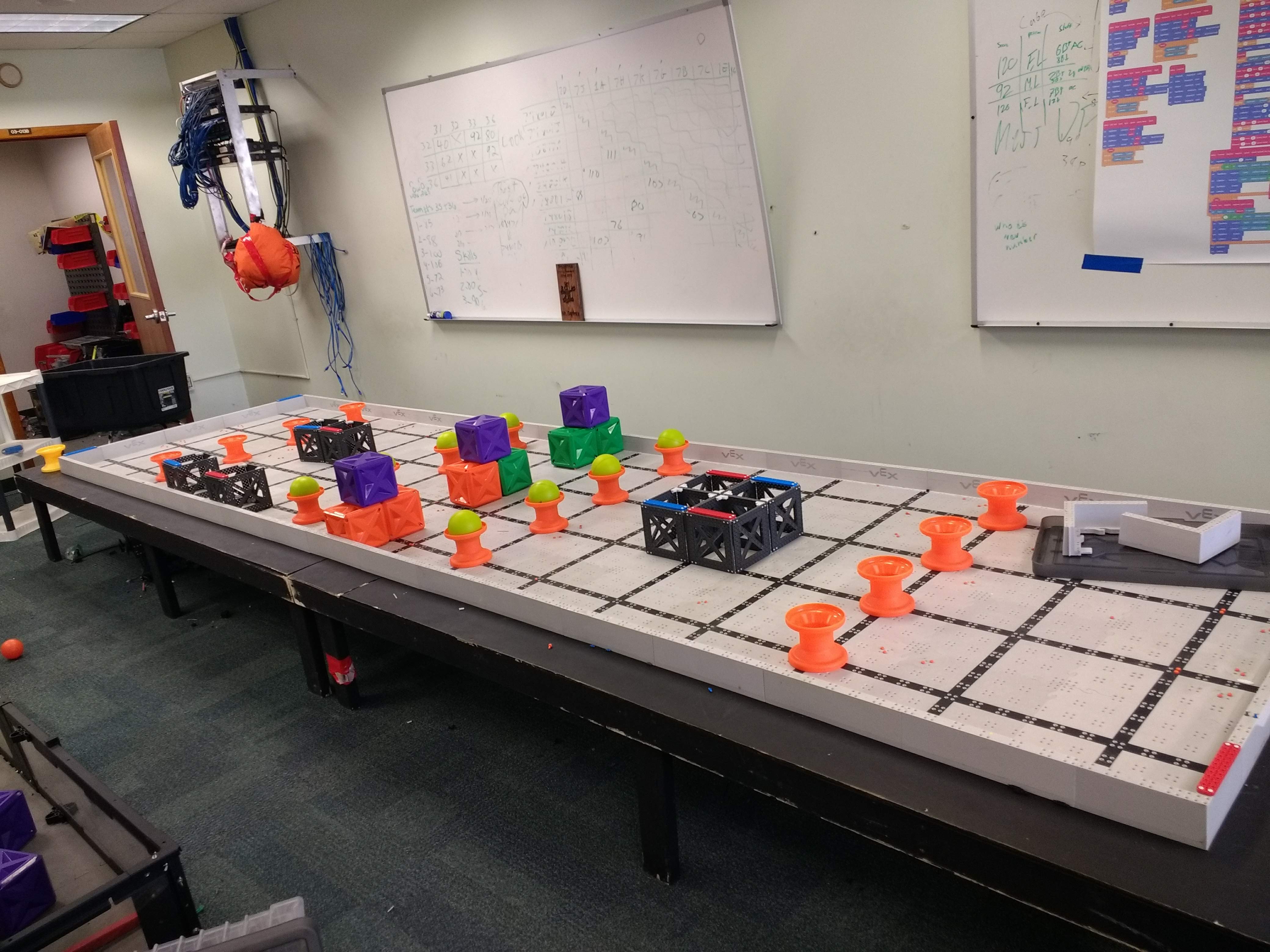 The tricky part is keeping the scoring simple with so many different types of objects. The rings from ringmaster are always a nightmare, so I skipped them this year.

Combination of:
Nothing But Net
Tower Takeover
Next Level

Guess it will be called… “Next Net Takeover???”

Standard IQ inspection but allowed to go over 15" once the match starts. (As God intended…)

No descoring. Will probably make some kind of protected zone at the end of the board.

Once the kids practice a bit I adjust the scoring to balance the game. I like prime numbers, of course.

Most evil combination: tower takeover, but the scoring zones are the yellow parking platforms from turning point…

good luck not dropping stacks or falling over

lol, the entire field would just be scattered cubes and sideways robots.

Star Struck, Tower Takeover.
Make Towers on the other teams side, know over enemy towers will Dudu the an equal number from your total. If you get a bag thing on a tower and it stands, double points

Clean Sweep + Tower Takeover: Clean Takeover
Just like clean sweep, but robots have to hurl the cubes over the center wall. The “locked up” cubes act like cubes in towers.

Tower Takeover and Gateway. Oh wait, those are the same game essentially.

Yeah. Gateway was an original game.

Zone takeover sound like hardpoint in COD or control in Overwatch

Most evil combination: tower takeover, but the scoring zones are the yellow parking platforms from turning point…

good luck not dropping stacks or falling over

Dr4b trays have entered the chat

Start a regular game or compound mashup, but winning team/alliance of the match gets to add whatever rule they want or remove any rule they want.

If I won, I would instantly add the height limits of NBN lol

That would be total chaos, especially if it didn’t matter whether it was at a competition or practice. I love it!

OK, hear me out. TT with TP flags.
That one kid who made a cube launcher can finally feel good about themselves.

You could actually make a cube puncher by making a large hole in your tray, and having a puncher behind it…

@Doctortictac coming in with the big brain plays.