We have a question about one of our students. A member of one of our teams has moved and would like to continue to remotely serve on his team. In fact, the student has worked on the robot during the end of the school year and during the summer as well. He is enrolled on an online school in our state, but located physically in another country. He has been with this team for three years and does not have access to any other team where he is located. We have read through all of the manuals and can only find the G6 ruling below: 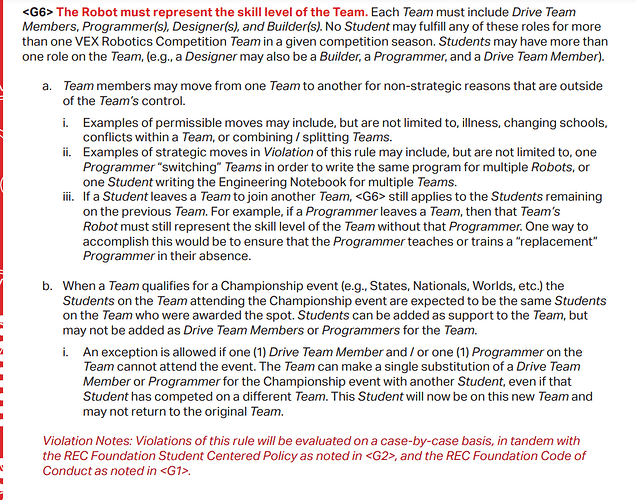 Since this member is has worked on the robot and will likely continue to contribute he is part of the team. That would mean that he would be part of the students on the team that was awarded the spot.

In other words he should be good.

He is enrolled on an online school in our state, but located physically in another country.

The question is more about what your organization allows - I know public schools have pretty strict rules regarding students not registered in their school district taking a spot in a club from a resident.

As for G6 teams are made up of students. As long as students are not fulfilling key roles for other teams.

Two great examples from teams in the 20-21 season:

One was a VRC HS team, all from one school but school was remote for them. They had two students do the physical build with others doing CAD, software, notebook, and online challenges remotely. Great team that had a lot of success even though the bulk of their team was never in person.

Another was a VEXU team that sprung up from freshman that had known each other as fellow competitors in HS. The robot was built in Austin, one team member drove it to West Houston so the software team could have it in person for a while. Their notebook lead was another hour away on the opposite side of Houston, with additional team members in San Antonio. The first time they met in person was at load in for the Texas VEXU tournament.

It can be done.