So I was wonering about the affect that gear ratios have on tracking wheels. Lets say you want to know the number of inches travelled on a full rotation of a tracking wheel on a 5/3 gear for speed bot. Is it still diamater of the wheel*PI. I heard from somewhere that you have to multiply by the gear ratio too.

The ratio is multiplied by the slop; it either magnifies or diminishes it

why are your tracking wheels on a gear ratio? tracking wheels should always be direct driven to an encoder for the least slop. if you’re using the internal encoders in the motors, then yeah you need to take the ratio into account.

I wanna say having a gear ratio increases/decreases the resolution of the tracking wheel, but I’m not entirely sure because the encoder still only has 360 ticks per revolution. I’ve seen it done before on v4 but I can’t seem to find the image.

So the gear ratio doesn’t affect anything with my tracking wheels even if my motor drive is geared correct? (the trackers are directly driven btw)

the ratio on your driven wheels does not effect the tracking wheels, no.

Edit: separate wheels meaning tracking wheels that don’t power the chassis but are rather passively moved by the chassis

The encoder is always 360 tpr, but a gear ratio could make the encoder measure more than 360 ticks for each revolution of the tracking wheel, effectively increasing resolution. Not necessarily a good idea though, and not the topic of the thread.

Not necessarily a good idea though, and not the topic of the thread

Why is it not a good idea (aside from space efficiency)? Also, it does directly relate to the topic of the thread: "Gear ratio affect of tracking"

I think that while you have more resolution, you will also have lower accuracy due to slop in the gears. so its probably a net loss in terms of accuracy.

I think that while you have more resolution, you will also have lower accuracy due to slop in the gears.

This is a good point, glad someone brought it up. I’ve seen one or two cases where people added a ratio to tracking wheels (can’t remember the team names at the top of my head), but I’m not sure they’re too viable with the state or things. Way too much slop between gear teeth in vrc 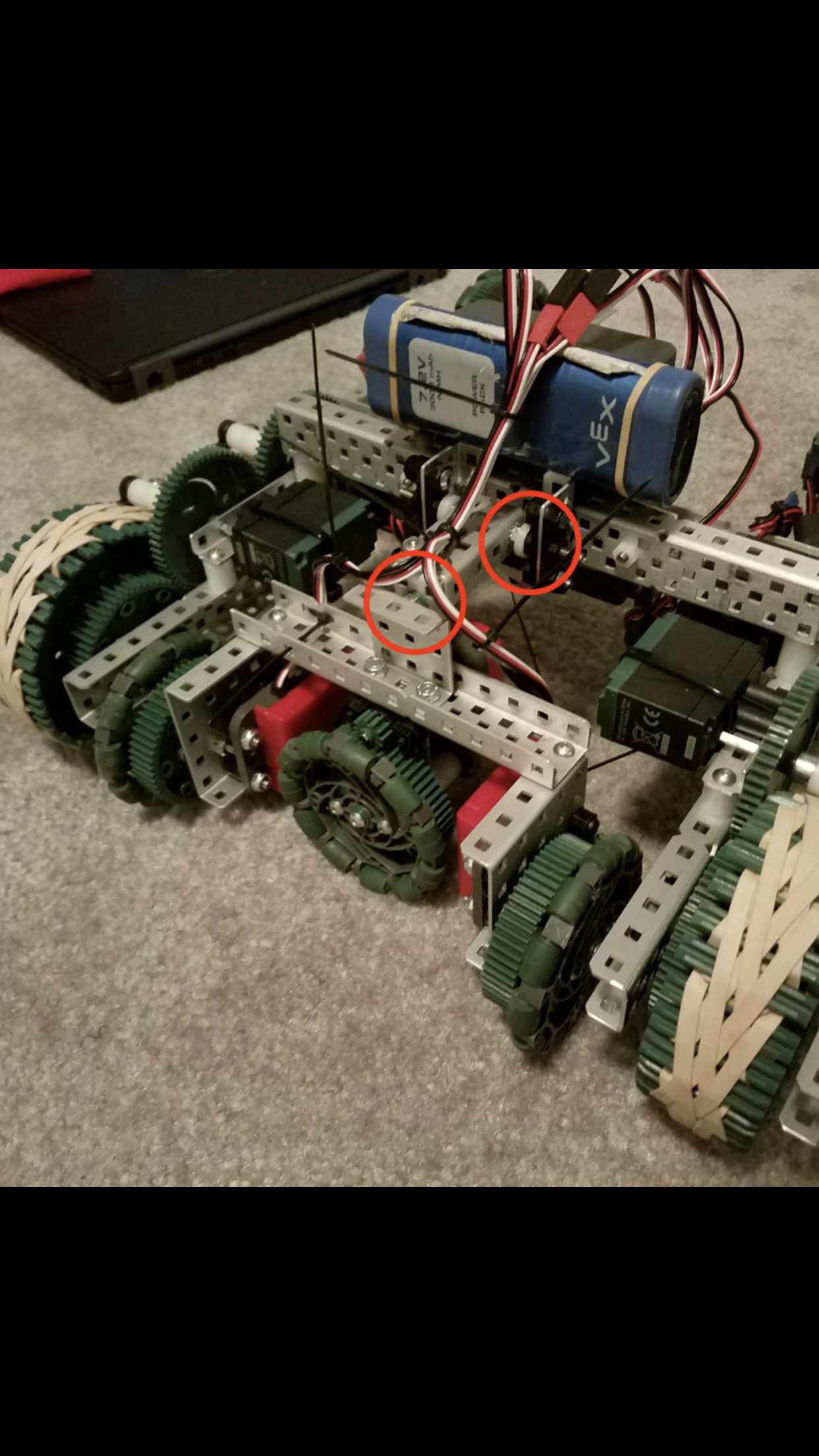 This is the only example I could find, but I don’t see how slop would factor into directly drive gears screwed into the wheel. Again, the main disadvantage is space efficiency as far as I can tell right?

This is the only example I could find, but I don’t see how slop would factor into directly drive gears screwed into the wheel.

When you switch from moving forwards to backwards, or vice versa, you get slop (backlash), even if it’s not driven

Actually now that I think about it it is driven technically; its driven by the traction between the ground and the wheel. Point still stands tho I think

So even with the gears screwed directly into the source causing it to move (i.e. the tracking wheel) it will have slop? I think that’s paradoxical because by definition, slop is the deadzone before the gear engages with axle on the wheel. For the example I showed, there is virtually no deadzone because it is directly linked to the wheel.

The only way I could see slop factoring into that is if there are gaps between the teeth of the gear and there might be some very minuscule amount not perceivable to the human eye but I don’t think it’s enough to factor into significant amounts of error. Maybe I’m missing something though

A better way to go about this method of increasing resolution is to simply decrease the wheel size. A 3.25” tracking wheel has higher resolution than a 4” wheel, for example (since there are more revolutions per distance)

You can also move the wheels as far away as possible from the tracking center, right?

Ah. Heres the confusion. Slop (commonly called backlash in the industry) is usually in reference to the gaps between gear teeth as they mesh. In the industry, there is pretty much never any slop between the actual axles to gears because the gears are usually bolted in, or tightly constrained some other way (in vex this is not typically true, unfortunately, but yes, it can be made negligible through methods like using lockbars or bolting gears/sprockets to the wheel itself). In what I was talking about, I was referring to the backlash between the gear teeth themselves; something that will always be apparent unless you have some method of compensating for it (like a spring system)

You can also move the wheels as far away as possible from the tracking center, right?

I’m not an expert on tracking or resolution by any means, but yeah I think the resolution would be increased when turning if they’re farther from the center because the wheels go through more rotations to reach the same angular displacement