I built two gearboxes, one a worm gearbox, and one a compound gear train.

The first worm gear box I built for the tilter, that takes a force of 9.05 Nm max under full load to hold up. I decided to use a blue motor geared 36:1 with a worm gear and a 36tooth HS gear. That was 12.6 Nm! Enough torque, I thought, but it failed miserably, as the gearbox couldn’t lift it even with half capacity. I switched it to a green motor, which seems like enough torque, but the gears were skipping, so I attached zip ties to spacers on the axles and tied them to standoffs to mesh the gears together with more force. I replaced the gears, as small bits of plastic had come off, and made sure the axles weren’t bent. Yet, when I tested it, gears still skipped under full load and wouldn’t tilt it up.

The second gearbox is for the arm lift with the infeed rollers on it. It was a mini 4 bar design, and we decided to use a red motor with 9:1 and used elastics to reduce strain on the motor. I’m not exactly sure what the torque calculations are for this one, as it was working fine as I planned anyway when I built it. It is a 36 tooth HS gear to 12 tooth pinion, and 36 tooth HS gear to 12 tooth pinion. I used two gear sets on the second part of the gear train to maximize surface area. When I tested it and moved it up as far as it could go, the double gearing set up I had broke some teeth on the 36 tooth HS gears specifically. I knew the motor was going to be enough torque for normal operation, but when it ran into more torque then it could handle (from pushing the arms up or down too far) the gearbox would explode. This happened multiple times.

VEX! Please make some different sizes of gears with slanted teeth for the worm gear, right now there is only 24 tooth and they are small enough to break easily. Although the 36 tooth HS gear fits fine. since the teeth aren’t slanted, there is not the optimal surface area. Also, please make some aluminum or even steel gears, or at least gears with aluminum or steel teeth. The plastic gears bend, twist, and break constantly. When trying to get the sweet spot between optimal speed and enough torque to work, the gears will get under the most stress. That would be amazing to have for next year, and besides, after Worlds is a perfect time to update the now-aging gear lineup. Am I justified in saying we should get better quality gears, or just a bumbling idiot?

tbh vex gears aren’t perfect, but they are alright.
I think most of your issues could probably be solved with better building practices, rather than better gears.

what annoys me is that gearboxes are simple in practice. two axles are mounted with bearing blocks and shaft collars to c-channels, and there is a gear in between the two with some spacers, then the same with a smaller/bigger gear so they mesh. obv there is support as well. it is either the gears dont have the surface area or the axle is bending when gear skips happen.

worm gears should be avoided, as they aren’t very practical for vex. if you stick to using the normal gears, and use good building techniques than you shouldn’t have any issues with the parts themselves.

Worm gears are really only good for avoiding back driving.
Also just keep building gearboxes it took me 5 tries to get mine working

Thanks for the hope

worm gears irl are very practical for avoiding back driving, but also practical for having a huge amount of torque from a compact gearbox, that was my main reason, is to be compact.

Yeah, believe me, I thought I was onto something too, until my gears started skipping like crazy. I then realized why no one uses the worm gear

Never had these issues.

I agree with Xenon27, vex worm gears can produce a lot of torque, but they can’t handle the load without skipping.

Quite odd that you have to use such high gear ratio. My tilter 1:7 100RPM can push 10 cubes; my lift is 200RPM 1:7 and can score the lower towers, alliance towers, and medium towers. The gears aren’t bad if you have a good geometry for the elastics so they are actually effective and efficient.

My arm gearbox broke again. VEX really at it again with their BS.

Lies. This is the sixth time now. I will upload a picture in a short while, but I am seriously considering quitting on this one. I bolted the two 36-tooth high strength gears together, and used the metal inserts that come with the 12-tooth pinions. I added crossbeams in my gearbox, and meshed the gears together with a zip tie. Taking the axle off and replacing the gears takes 30-45 minutes, and my school is running out of gears too. They broke this time after my worst nightmare happened. The code went haywire and kept running the motor at full speed when I wasn’t pressing anything, and I had to fumble around the V5 Brain trying to pull out the wire before it was too late. But, alas, it was too late. Of course. I understand now why the tilter gearbox wasn’t operating at full capacity, but this is something I have no idea how to fix. I asked my mentor, the other students, and on here, and it seems that no one can help me.

What happened? Did the gears snap in half, lose teeth, or gear slippage?
I’ve never had any gears explode on me yet. Lockbars can also help with strength

The general stance I take towards this whole thing is ‘if something breaks, it’s probably my fault. Did I secure everything as much as possible?’ and if the answer is ‘no’ there’s no way I could blame vex.

My answer is not no. 12 gears have broken. I’ve gone through a process. Now I’m broken. Having stronger gears would just solve so many problems. I’ll upload an image in a bit.

Another thing that you should consider is the type of motor cartridge(s) you are using. The blue one is 600rpm and should mainly be used for high speed applications, such as flywheels or intake systems.

For this season’s game, I would suggest using the red 100rpm cartridges, as they provide a significant more torque output than the blue ones.

yup, using a red motor geared 9:1 for the arms

Ok, then if the gears are still breaking even after using a compound ratio and the red cartridges, built quality would be the number one thing that I would inspect. Without images, it is hard to assume that build quality is the #1 issue for your robot, but having better build quality can fix many issues (not trying to say that you have bad build quality, just saying that it can affect the performance of your robot). 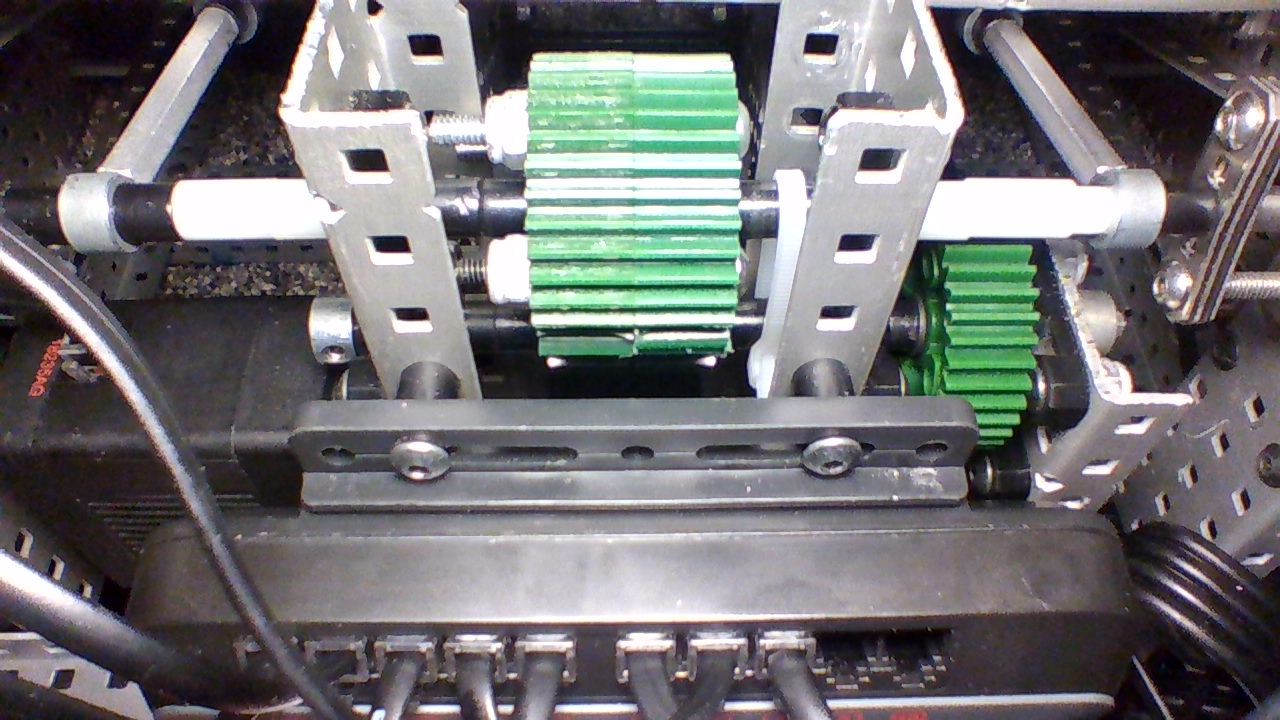