Starting a thread to use for Gen 1 Snapshot herobot discussion.

Note: the gen 2 build uses parts from the Gen 2 competition kit, the education bundle does not have all the parts.

I made a Google Doc for anyone to put errors they find in the Snapshot instructions or suggestions for making it clearer.

This is a doc to compile any errors in the Slapshot build instructions or suggestions for making it clearer. Format errors like this: Page 13, step 27. Cord to left drive motor disappears. (I completely made that up.) Try to keep them in order.

Not that I’m expecting a lot of errors, but more to keep them locatable.

I’ll start this off with an engineering quote:

“If it’s not broken, it doesn’t have enough mechanisms yet”

I built the herobot and am pretty underwhelmed with it (this is a complaint post, so take it with a grain of salt).

I do appreciate all the work that went into this, but I just think that this isn’t the best that could have been done with all that work.

IMO this goes at the bottom of the list of the best herobots. I didn’t think it could get any worse than Fling.

First off, here’s my contribution to the instruction fixes:

Step 44: In the parts list at the top of the page the label says a 2x8, however the correct piece (and the piece in the picture and model) is a 1x8.

Steps 57-58 are just kind of awful to do with one person, as the rubber bands have a good deal of tension.

So on to the actual robot itself.

First up: it is just overall flimsy, inconsistent, and break a lot

It severely lacks in pins, lead to breakages

The rubber bands break a lot

It gets stuck on the disks

The zone-toucher barely reaches over the fence and is super hard to line up.

The wires of the drive motors get in the way of the shooter.

The black rubber belt on the intake roller should be replaced with rubber bands.

I’ll probably add more to the mist as I remember more things, but this is what I can remember right now. Feel free to ask for clarification or elaboration (or video) on anything I said here.

This is just my two cents, and I’d like to know where other people who build this stand. Is it a good build? Top of the line? Good or bad for elementary nd middle schoolers? A good use of time?

TL;DR: I think the herobot isn’t that great and has a lot of problems (read bullet points for details).

I think the herobot isn’t that great

If you think this robot is supposed to be great, you are missing the point of why these predesigned trainers are offered to novice teams. Their purpose is not to be a great robot, their purpose is to help a beginning team learn how to build with the Vex robotic system, and learn some mechanism basics, acting as a starting point for a team to use the engineering design process to build a great robot of their own.

If you think this robot is supposed to be great, you are missing the point

Sorry for my thoughtless wording here. What I meant to say was that herobots are supposed to have a certain amount of robustness to them, not that they are supposed to be competitive and score lots of point with little to no room for improvement like a robot that a top level team will bring to worlds.

They are supposed to work decently, while still being limited in perhaps one of two major point scoring ways. This helps students get the satisfaction of building the robot while still having the opportunity and inspiration to improve.

Many of the kids who build this will have never built a robot before. IMO this herobot is employs some iffy mechanisms that should not be used on a custom robot because they are overly complex and don’t really work.

One of my favorite herobots was the Next Level one, because it could do most scoring actions somewhat well, couldn’t get the tantalizing yellow bonus hubs, and was simple and actually employed mechanisms that would be used on a competitive robot.

Yes, I agree completely. These pre-designed trainers should have excellent build quality since they are intended to serve as the example of how to build.

I’m glad to see these trainer builds remain “slow”, with simple direct drive motors on the drivetrain (the introduction of a couple idler gears was a nice feature) but I think, however, it is unfortunate that mechanisms are being introduced, for example the radial release mechanism of Fling, that are beyond the mechanical ability of the novice student. I think these builds should have much more basic mechanisms that are easy to understand, easy to repair, and typically show a basic concept such as gearing for torque or speed. If they can’t score a lot of points, well, that’s the point, they aren’t intended to.

Taking it a little off topic from iq, but I am honestly not impressed with the vrc hero bot either. The past ones have had at least decent build quality, even if the compound gearing on moby’s arms was a little sketchy. But I honestly feel like a lot of corners were cut on the design, and things that no competitive team would do were done, such as cantilevered wheels and different sized wheels leading to an angled base. These are honestly terrible build quality, and I’m not even going to mention the huge uncut shafts that stick out all over the place and pose a large possible damage risk.

The past ones have had at least decent build quality,

The original clawbot trainers, both IQ and V5, are where we start all our new teams, and what we build at our basic summer STEM camp. These trainers for the most part have given all the instruction our teams have needed. I am somewhat ambivalent about the need for game-specific trainers. Some of our teams have built them, especially in IQ. But we try to get our teams into the regular design process as quickly as possible after building a clawbot trainer.

OK, built a Gen 1 Snapshot this morning, don’t have any disks to try it with yet but here are my build notes:

On page 27 of the instructions – it would be nice to have the length of the required belt so you don’t have to scroll all the way back up to the parts list at the top of the PDF.

Stretching the two rubber bands across the mechanism in step 57 is very hard – you almost need 3 hands to hold things in place while stretching the bands to stop the tension from tearing things apart. Once you add the beam in step 58 things stabilize.

Maybe my belts are old, but when I tried it, it just flat out didn’t spin the intake, even with nothing in it.

Seems to work fine on mine, FWIW.

I complained last year about this to support and @Bob_Mimlitch_III. I got told it would be fixed and that it wouldn’t happen this year, but here we are.

The drive base motors should be in ports 1 and 6. Viewing from the top, left hand motor in 1. Right hand motor in 6 (or port 12 if you have shorter cords).

The other two motors get plugged into ports 4 and 10 (front buttons on the controller. ) Your roboteer can pick the best way.

I’m all for programming, but with an awesome drive program available, it makes a quick success for the roboteer. 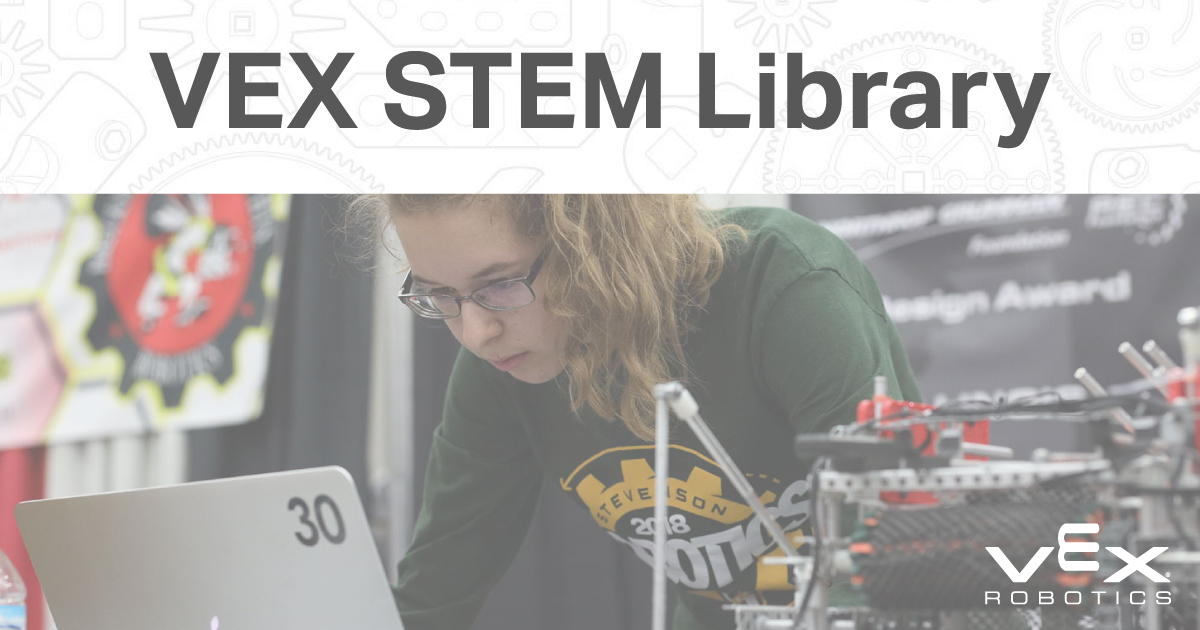 Using VEX IQ (2nd generation)? See this article. The Driver Control Program is a default program built into the VEX IQ Robot Brain so it can be used with Smart Motors, Bumper Switches, and the VEX...

There is no comments in the instructions about needing to write code, how to find the code, etc.

Oddly, the wiring for the Gen 2 snapshot is correct. 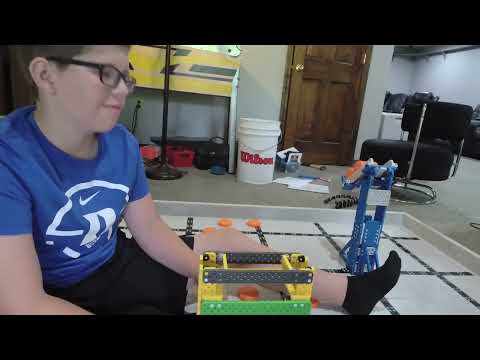 Happy to see that I’m not the only one with a yellow dispenser that does not want to cooperate.

A new revision of the Gen 1 Snapshot instructions has just been released.

Changes include some of the feedback provided in this thread, as well as the wiring.

Please continue to provide feedback if you come across anything!

provide feedback if you come across anything

I’m going to take you up on this.

It appears that on steps 95-97 two of the the standoffs in the launching mechanism disappear and move over to the right, going through the wheel (edit: this issue first appears in the second picture of step 94). 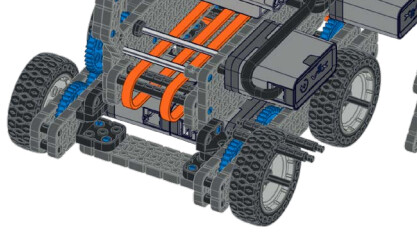 Need to say that the rev level is 5. I used the link at the beginning of the thread and it takes to Rev 3.

Wiring is not how I would do it, but it will work. Or how the V2 VIQ bot is wired either.

Thanks for the update!

Editing the OP doesn’t seem to be an option for me any longer, maybe it is on a timer. This leads us to our next suggestion, a static link to the ‘current’ rev.

This link should always redirect to the latest revision:

It does and thats how I found it. But missed the link to the Rev5 version local to this.

Thanks for the heads up on this.

Another revision (Rev 6) was just pushed live that fixes this issue. It can be found here.