Help give advice to make the robot better!

Background: I am the main coder and designer, and co-notebooker. We (the notebookers) usually move away so that the builders have space to build. I came back and saw this. One of my teammates is the main builder, and he is insistent that this will work even though it is bad. Please give advice and or list things that are bad about the robot and how to fix them! Help with specifically the intake, but also tips for a flywheel (our future shooting mechanism) would be helpful!

Note: We don’t have smaller flex wheels yet! 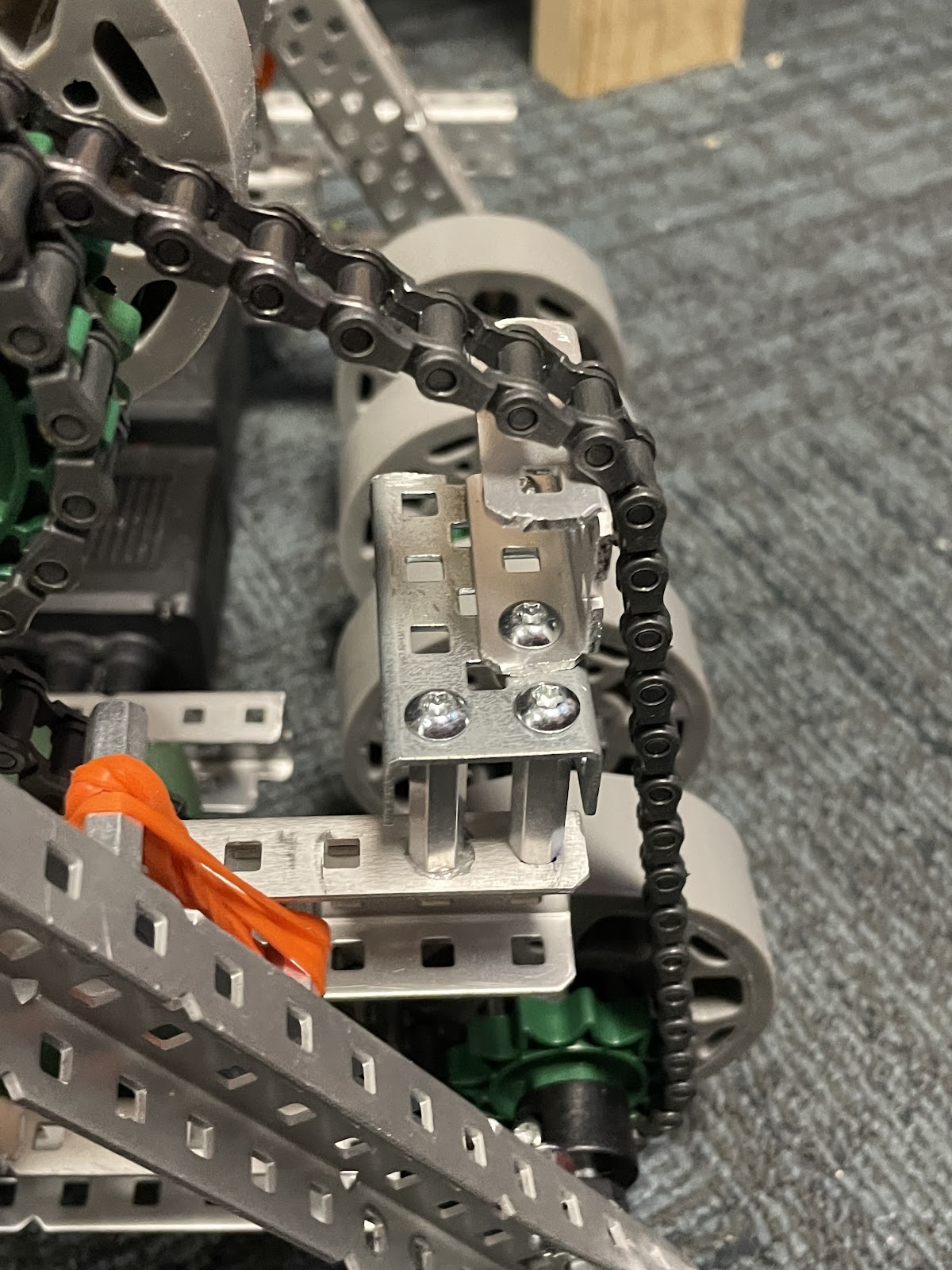 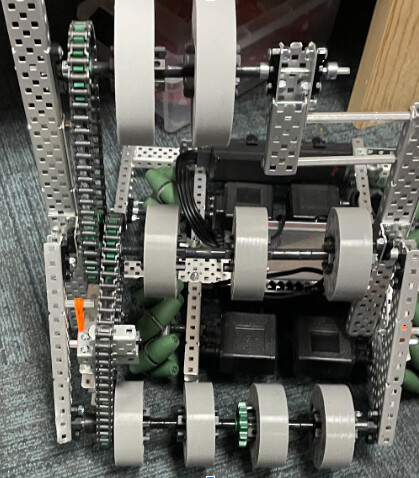 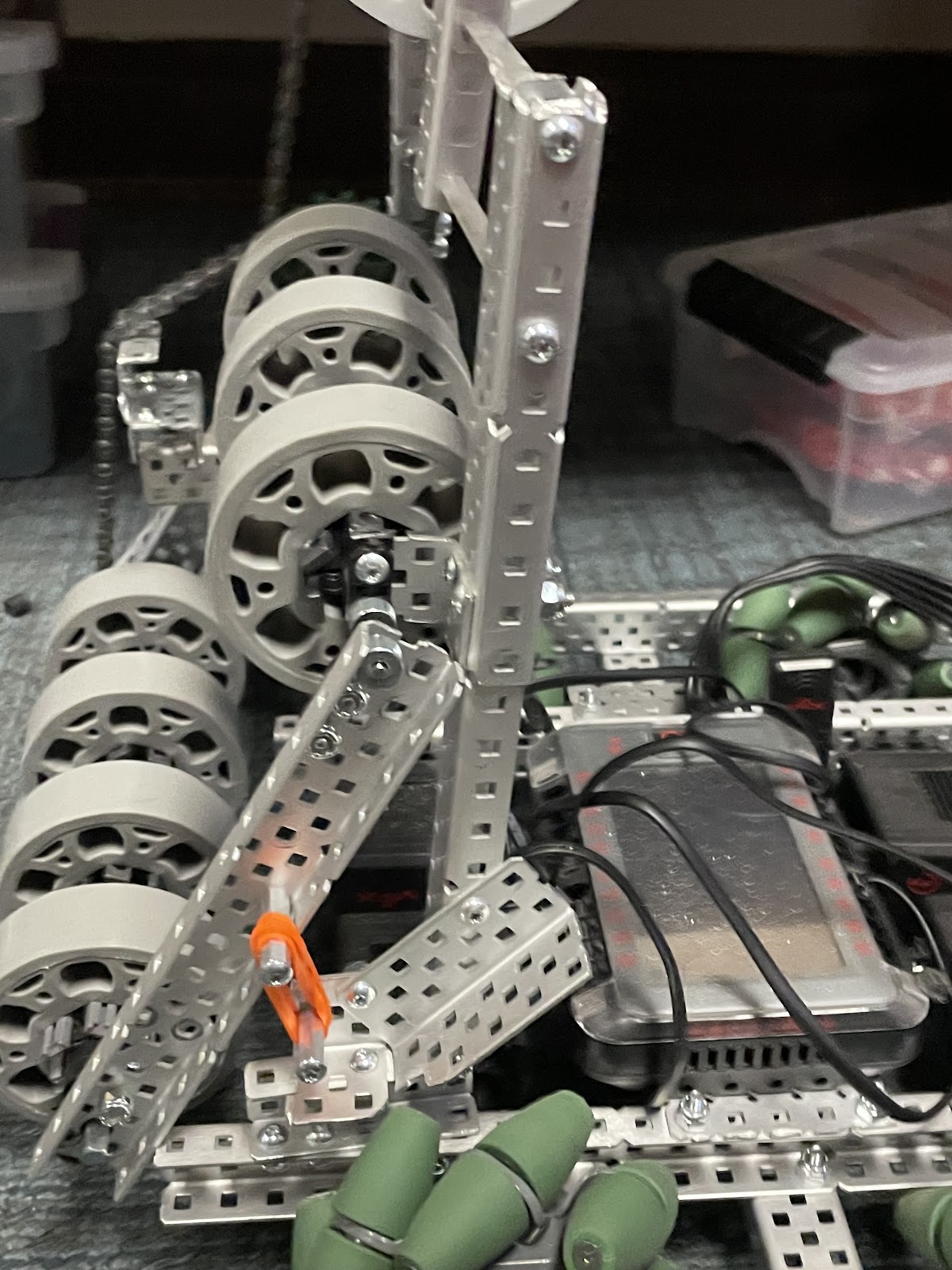 those rubber bands are doubles over so thats alot of tension might run into issues while intaking. i owuld swap to smaller flexwheels to try and get the intake more compact. add bracing across the floating part to prevent twisting. the chain tensioner might not even be nessesary

Oh, I also forgot we don’t have small flex wheels yet, I will edit the post.

Are you doing a catapult or flywheel

As a mediocre team’s member, I’ll only try to give advice.

Firstly, try putting the chains between the flex wheels instead. If you need them to go around a joint, then instead of putting a chain tensioner, just put them on different spots on the chassis instead, so for example, axle A links to axle B, and axle B links to axle C but the three aren’t linked directly together with one chain.

Secondly, your intake is generally not that strong. I would recommend attempting to mimic the Disco intake first— It seems you’re trying to build one of the high level intakes like 606X right off the bat, which unless you’re trying to build a very bulky planetary shooter, isn’t really necessary. Oh, and you kind of need a back plate for the disc to go on. I would recommend building the intake as one mechanism, backplate and all, rather than wheels and backplate separately.

Thirdly, the positioning of your electronic systems are slightly awkward. If you’re going to mount a shooter on there later, that brain is going to be very difficult to access from where it is right now. The motors are also in the middle of the chassis, and if that is intentional, then good, but if you want some more space for your intake, your front drive motors may obstruct that.

Something else: your chassis (at first glance) is below size limitation and quite short. Is this intentional? You may want to upsize your chassis in order to make room for new components, and a larger chassis generally means more stability.

Tips for building a shooter: Firstly, you need variable RPM, so you can shoot from all sorts of distances across the field. This should be controlled by the voltage option, not the motor velocity option, otherwise, the motor will constantly oscillate and have an inconsistent RPM. Secondly, you’ll need to do quite a bit of tuning to get the tension just right to shoot the disc well. Too much tension and the disc will get stuck, too little and it won’t fire far.

Message to general public: I’m not the most experienced, so feel free to correct me. Message to OP: you should go around on the internet and look at other robots, that’ll give you some better ideas.

Firstly, try putting the chains between the flex wheels instead. If you need them to go around a joint, then instead of putting a chain tensioner, just put them on different spots on the chassis instead, so for example, axle A links to axle B, and axle B links to axle C but the three aren’t linked directly together with one chain.

Chain tensioners are simpler and often have less friction if done right; they should be done with free spinning spacers/sprockets. OP has a piece of c-channel which is most likely adding lots of friction.