Hi! I am having some trouble with my 4-bar lift. The lift is struggling to lift a mogo any more than a few inches off the ground. The gear ratio is 7:1, which should be enough torque when powered by a 36:1 red motor. The catch is, at and before the state champs, the lift was on a 5:1 ratio and still worked well. Then after states we moved it up to a 7:1 ratio when it started to not work well. At first the change was successful, but when we started doing practice matches and skills runs after states, it would not lift the goals. There is little friction, and it is sturdily built. We thought it might be the motor burned out, so we replaced it…with six different motors, all still not lifting the mogo more than a few inches above the ground. The arms of the lift are all 26-long c-channel. Any suggestions on how to fix it?

U could add triangle or linear banding.

For triangle banding, find three points, when arm is lowered, they make close to a right triangle, when lift is raised, they make equilateral triangle

Can you post pics so we can see the lift? It’s hard to diagnose problems right now because your description doesn’t have any red flags

How many rubber bands do you recommend? Also, I can post the photos later today when I am at my school’s field with our bot.

Use aluminum and ruber bands on the lift. Also bracing and correct spacing.

That’s strange, in no world do I remember higher gear ratios make it harder to lift. Also why did you gear up your lift when your previous one worked well? The only thing I can think of could be the problems are:
A mechanical issue which you said there are none
A motor issue which you said there are none
Or an issue with the code but you didnt change the code you only changes the gear ratios on the lift. Can you send a picture of the lift to help with your issue?

Do you have any problems with the gears skipping? Sometimes that happens when you switch to a higher gear ratio. Also, have you tried switching back to the original 5:1 ratio and seeing if that works? If you do that you might be able to see if the problem is unrelated to your gear ratio or not.

We switched to a higher ratio because we wanted it to be stronger for worlds than it was at states. Also, the lift motor started to burn out several times after we replaced it, so at first we thought it was the lower ratio. here are some photos of the lift: 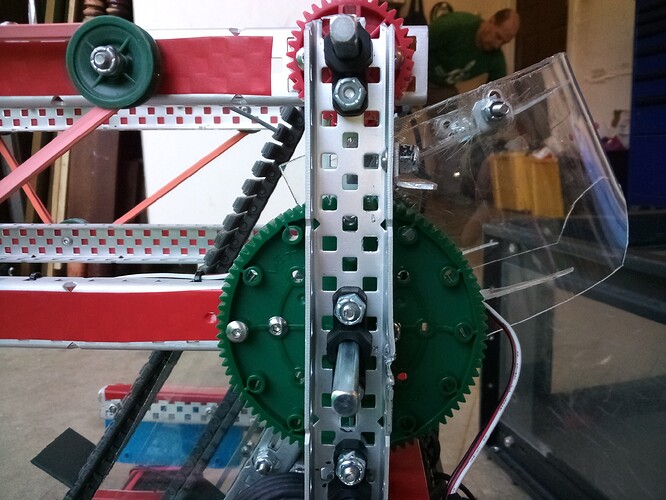 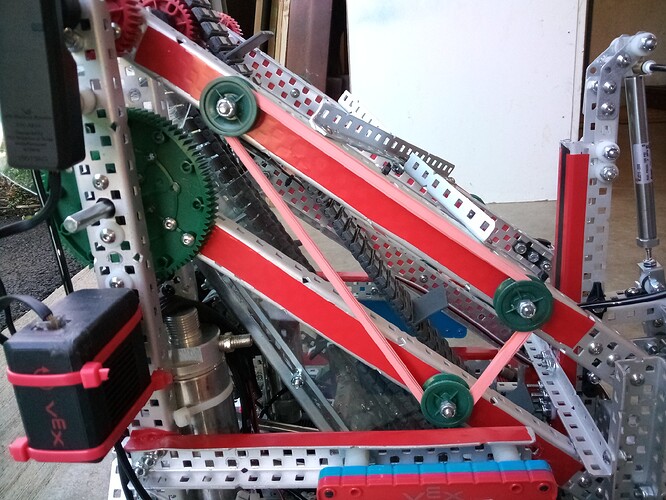 Does it lift a few inches with normal speed and torque and stop, or does it lift slowly and stall out the motor? Also, are you able to complete the full range of motion without the mogo?

From what ive seen (my robot this year had 2 4 bar lifts) the biggest issue could be motor burnout or incorrect spacing. If the arm is able to move without a mogo or if it is able to move when pulled on , then its most likely not spacing, also if you are using 2 motors make sure they are not opposing and are both active. One more thing is my robot did not use any rubber bands (other than for our battery) , and yours might not either.

The lift is powered by one motor. We can lift it without the mogo. The rubber banding helped some, but it still burns out the motor if you use it for more than a few minuets at a time. After we clamp the mogo, it slowly stalls out the motor as we lift it. But only after it is used for like one skills run, under five minuets. Could it be that all our replacement motors are half-dead? We have tried like six different motors and it has happened to all of them. And after we let the motors rest for like 30 minuets, they will work again for five minuets, an so on.

And after we let the motors rest for like 30 minuets, they will work again for five minuets, an so on.

I have a six bar that does this as well. We practice skills runs, and after about 10 minutes the arm will start giving out, and exactly what you are describing happens. This happens with the drive train as well. I have noticed that after consistent use the motors will overheat and stop working. My diagnosis is that there is nothing wrong with your 4-bar, but you are simply using the motor for a prolonged time period until it overheats and its power declines, rendering your 4-bar useless for short period. My advice to you is this:

Also for the hs axles in the arm, are they connected throughout to fourbar and just on one side. We had problems with lifting and after making the axles connect through the entire arm, we lifted much easier

Just a warning , do not use canned air upside down on the motors, it can ruin them.

How so? Many teams do this, and I’ve yet to see any failure due to this process.

Google sums this up pretty well.

How does thermal shock work?
Thermal shock occurs when an object is rapidly cooled from high temperature. The surface layers contract against the inner layers, leading to the development of tensile stress and the propagation of cracks

I’ve been using upside down canned air to cool motors for about 4 years and I’ve never had any trouble with it. Sometimes theory isn’t always right.