We are having slight intake issues that we can fix and we may be out of spec but the solution is to simply cut a piece from the robot. We only have 3 meets left before comp and we’re a bit behind. We have our driver code done and need to start on autonomous, but we haven’t tested it out yet and we still have to add in our lift sketches, more logs, and all of the intake stuff in our ENB before comp. Please leave some suggestions

Would it be possible for you to share a picture of the robot?

The only way to catch up is to catch up. Find time outside of formal meetings to meet and work. Programming and notebook discussion can be done via Skype, Discord, etc. Driver code should take no longer than a day, which will leave the rest of the time to auton. The key is to have everybody working.

Assuming best case scenario, you finish auton and drive in one day, giving enough time for the driver to practice, which you also have to account for.

However, your best bet is in the future, plan accordingly so you aren’t rushing last minute. Everybody needs their time, so you need to manage it well.

Ok. Thanks so much!

We have two team memebers who havent really worked with VEX before, so we may have to help them learn a bit.

For making an autonomous, it is mostly trial and error with testing so removing that piece as soon as possible then just work on testing rudimentary autonomous-es would probably be your best bet, coders can work (usually) outside of meetings. Otherwise, intake is going to be the biggest concern and a team priority since a robot can’t function without. Saving time for testing is probably the most important thing, I have been in that spot and it sucks to be competing with something not tested enough. As for your 2 team members, having them formulate an autonomous strategy would be a good first step. Best of luck.

Otherwise, “The best autonomous codes are made at the competition” -Me trying to justify my laziness

thank you for your help! 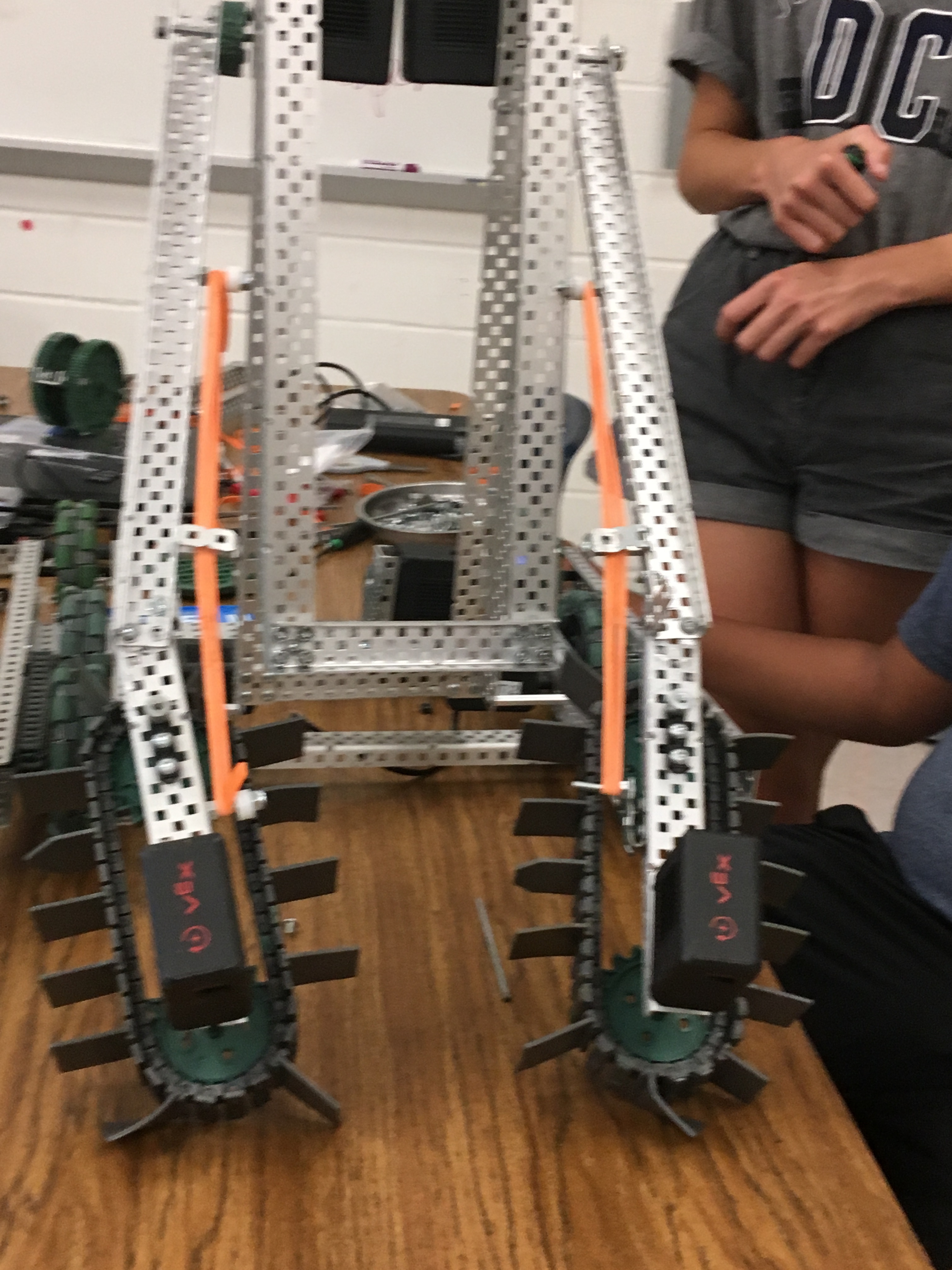 Here is the robot. We gave to fix a few things but other than that that’s it.

the cube works well with the intake it fits perfectly fine . but up where the intake connects to the lift motor (i dont think u can see it on this pic but its the best one i have) , there are some torque issues and it is a little heavy at the end because of the motors being at the very end 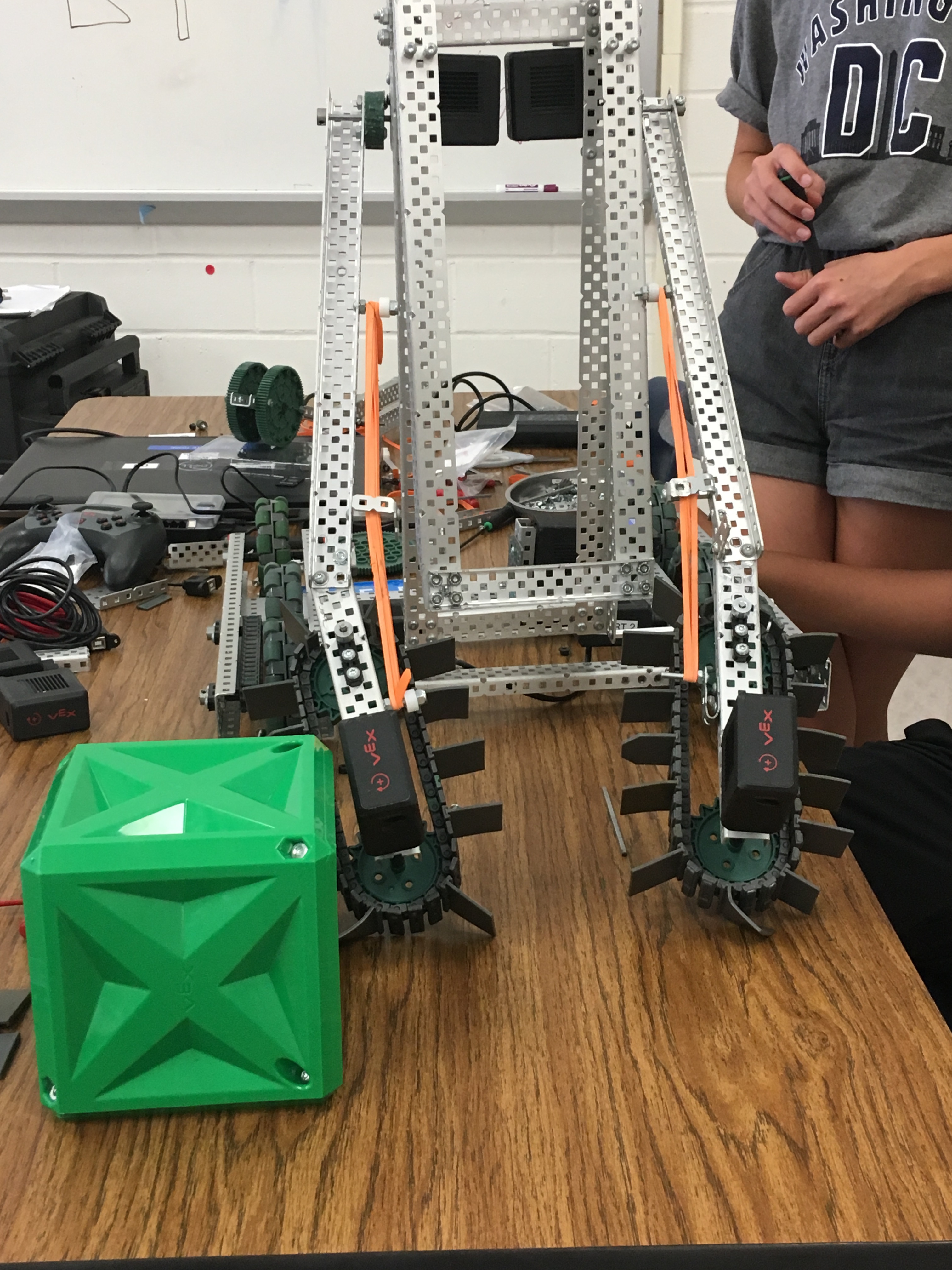 Here it is with the cube next to it

You could probably use come bars to channel the cubes in a direction that wont interfere, then the best way to add weight to balance things out would be to use steel c-channels where possible. Hope it helps, I am no good with pictures of robots.

Thank You so much! it definetley helped.

So it looks like your lift is powered by two motors. What motor cartridge are you using? You might want to gear up the arms to increase the torque too.

Yes, the red cartridges are the torque ones. I would suggest gearing the arm with a 12 tooth metal pinion and a 84 tooth high strength gear.
1:7 gear ratio

Thank you! I’ll try to find the high strength axles, but since we are a school team it is sometimes harder to retrieve the better parts. We may have them but another team possibly took them first. Thank you again

I don’t think it would be bad if you do not use the high strength axles, but gearing the arm is important.

alright, I’ll tell my team memebers about the gearing arm and if its possible within the time limits we have. Thanks!

And one thing is that I don’t think I see is flat berings on your axle pivot points. You should really put some in, they will prevent holes from emerging in your metal where the axle is. And it will also improve your arm’s stability.