Not to diminish the work of @adamjgray (your instructions look great!)… but we got a nice surprise this morning. The Build Instructions for both the Gen 1 and Gen 2 versions of Snapshot are now ready and available!

I also put together some renders of the Gen 2 version, to show some closer looks at each of the subsystems. Those can be found here.

It is odd that we are a month post reveal and still no hero bot instructions. Obviously there are a litany of reasons why this may be, including unexpected challenges, getting the sample to the illustrator late or a deliberate effort from RECF/Vex to encourage teams to find their own path before providing one. Whatever the reason may be, it would be wonderful for the powers that be to explain that and at a minimum show the students a real world example of how these things works and why some de…

Sorry for the radio silence on this. I was waiting for the instructions to be released to pull back the curtain on this process. (Shoutout @Jon_Jack)

In an ideal world, the hero robot instructions are released at the same time as the new game. However, the hero robots have honestly always been a secondary task for the GDC engineer. Their primary task (as expected) is to actually make the games and get product in our warehouses to ship to teams.

The hero robots typically don’t get started until after the new game elements and objects are designed, and somewhat “final”. Some of this is due to a lack of bandwidth, but a big factor is that this is the first time that the new game is stable enough to actually build a robot.

The problem is, this normally doesn’t happen until right around the time the GDC has their first meetings for the next game… Sending the GDC engineer right back into doing game engineering because they then have approximately 6 months to take two game concepts (some of which are loosely defined), prototype the game, and then make a field that is somewhat presentable to the powers that be.

Imagine designing a robot, only to find out that some element of the game is changing and now you have to redesign part of the robot. Then tack on some of the other “must haves” throughout the year that require some level of involvement from the GDC engineer(s) (ref training, game unveil, making sure new games arrive mostly on time, etc.), and you can see how easily it could be for delays like this to happen.

To make matters worse, once the hero robot is designed, it has to get modeled in CAD. Then we have to make instructions. With our current backlog of instructions, it’s not uncommon to take about 3 months to actually get a set of instructions finished. The hero robots also tend to be lower on the priority list since they don’t have a “hard” deadline like other projects our graphics team takes on.

All this being said, we understand the frustrations of these instructions releasing as late as they are, and we’ve taken some precautions to (hopefully) prevent this problem from happening again.

Our team is still hard at work developing the build instructions for the VRC Hero Robot (Disco), and we are looking to release those sometime within the next month or two. In the meantime, I also made renders of that robot, to give teams a better idea of how to build it. Those can be found here. If there’s anything that’s not clear, just let me know and I can create some additional images.

I’m getting a 404 | NOT FOUND error on that link to the renders.

Those can be found here.

Sorry about that. Should be working now.

Excellent explanation, thank you for that. It is a perfect example of prioritizing ‘needs’ over ‘wants’ and helps provide a great real world example of doing the most important things first.

Thanks so much for the explanation! I appreciate you all getting these out and it’s a great surprise to have them out in time for our camp. As I’ve learned over the past few days, getting this done isn’t simple or easy. Personally, I’ve developed a great respect for the work that goes into it on your side. We’ll be going through both of these in the next few days. I’ll report back anything I find. Be on the lookout for a build-along video of both of these later this month!

Echoing others here, happy that the instructions released, and definitely appreciate pulling back the curtain to give us some insight into how this happens.

Thanks for the explanation, would be nice to get a hero bot for my summer program for vrc, but its fine, well make do

I should be able to go through both sets of building instructions this weekend. I will post any findings afterward in preparation for recording.

I think it is great to see the behind the scenes on the process. What might be really cool is to have an engineering notebook to accompany the Herobot as an exemplar … note it would be good to show both a hardcopy approach and digital notebook approach to documentation.

As always, so good to have any real examples!

Here are my findings from building gen1 the first time:

The port assignments are obviously preference. Personally, I’d rather teams program their controllers as well, but I know a lot of teams are still lacking in this area. I’ll definitely cover this in the build-a-long video I start putting together later next week.

I plan to get to building the gen2 version tomorrow. I’ll report back what I find there.

Edit: I guess I should have looked further ahead. There are most definitely parts from the competition kit. Those that only have the education kit will have a very hard time building this. They should probably build the gen1 version instead.

Note: The last two lines obviously can’t both be true at the same time, lol.
Step 97 should probably go to Port 4 for Driver Control.

Does anyone know if it’s intended that you have to have the competition kit for the gen 2 instructions?

It actually tells you right upfront on the “IQ Competition Builds” page: 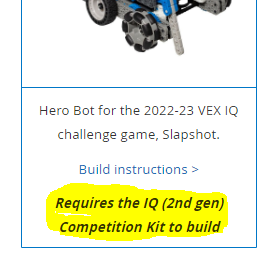