There is another correction to be noted on page 29 (steps 64-67). The picture showing the parts needed lists ten 1:1 pins, whereas two 1:1 pins and eight 2:1 pins are needed.

I’m still working on a video for building Fling with some of my lessons-learned. I might just lack the ability to clearly communicate the issue without some kind of picture or diagram, but hopefully the video will clarify where necessary.

I’m having a different problem. I noticed that this uses the pulley but I don’t think that I have any of bands used for the pulley. The instructions actually show a rubber band, would that work in this case? 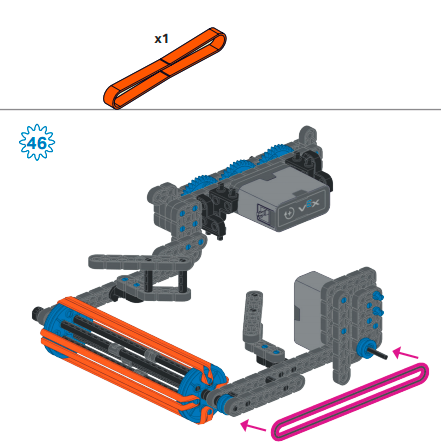 Personally I haven’t tried it, but it looks like it should work fine. If you do try it, I’d like to hear how it goes.

The belt is similar to the ones here Pulley Base Pack - VEX Robotics I’ve had success with rubber bands.

There are some of those belts in the IQ Super Kit: 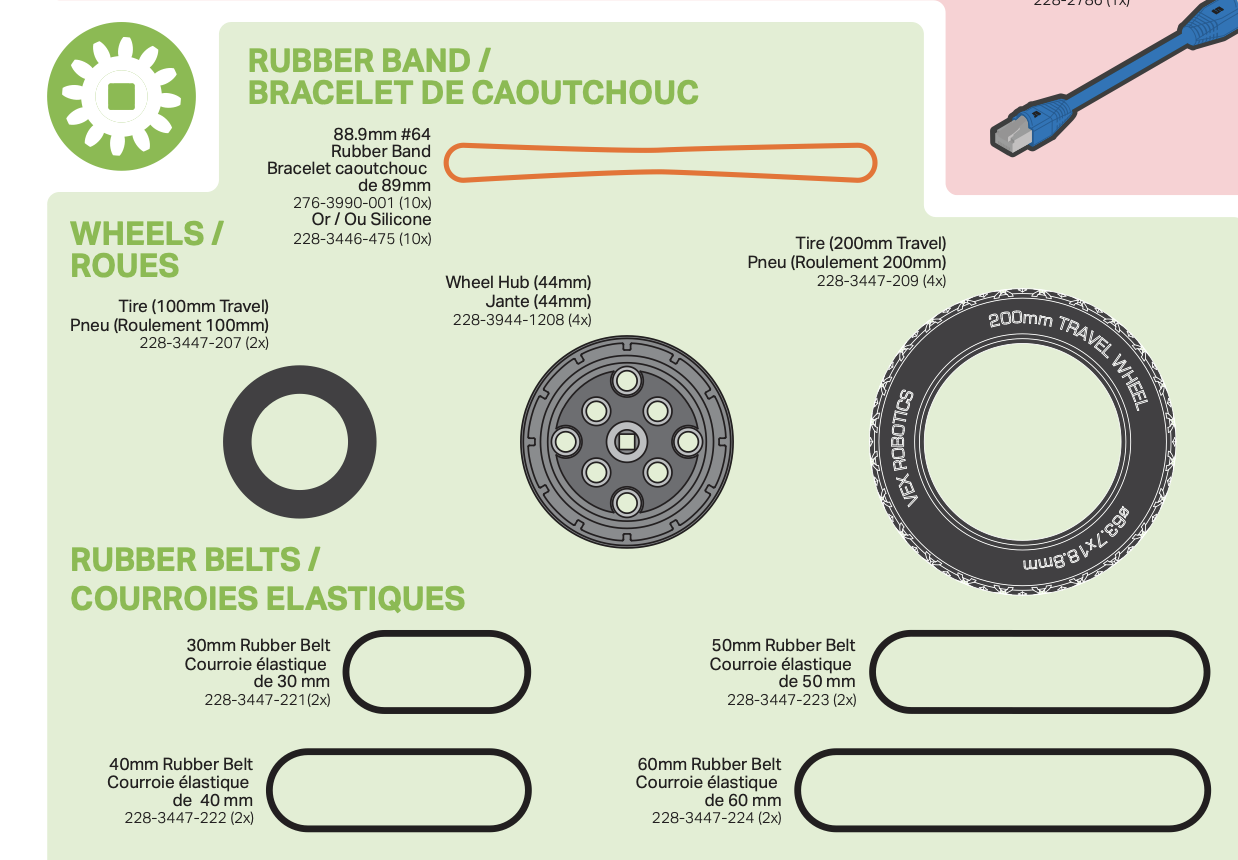 Although I don’t think I’ve ever used them before, wouldn’t be surprised if they’ve walked away from a few of our kits.

I think the correct term is “finger gun shot away from the kit”.

To drag back on topic, I’m happy that the pulley system got put on display, I’ve seldom seen it in designs in the wild.

There are some of those belts in the IQ Super Kit:

The last super kit I bought was many years ago… Over time they have disappeared. I’ll let you know how it works!

Over time they have disappeared.

Or got shot all over the room like rubber bands

I always pulled out all the belts and rubber bands before kits get to students: they can get them from a mentor as needed, but rubber-band guns are banned.

In this vein, I am trying to determine how to prevent students from pitching the Pitching In balls at each other.

Don’t you mean “in vain”

All of these issues have been documented and are being updated. The current goal for the updated instructions is to be released alongside the first manual update.

In the tradition of last year’s review, my roboteer made a Herobot review, enjoy: 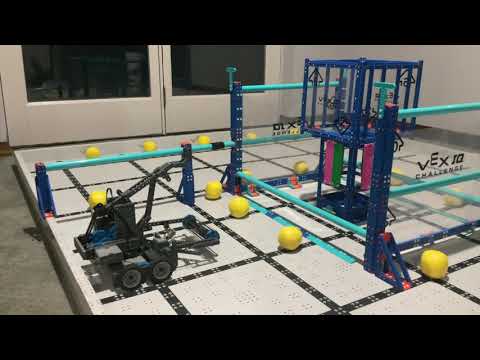 Finally got around to building Fling this weekend, some of my notes that I haven’t seen yet in this thread:

The 60mm belt driving the intake had to be stretched very tight to fit – so much so that it racked the whole intake assembly quite noticeably: 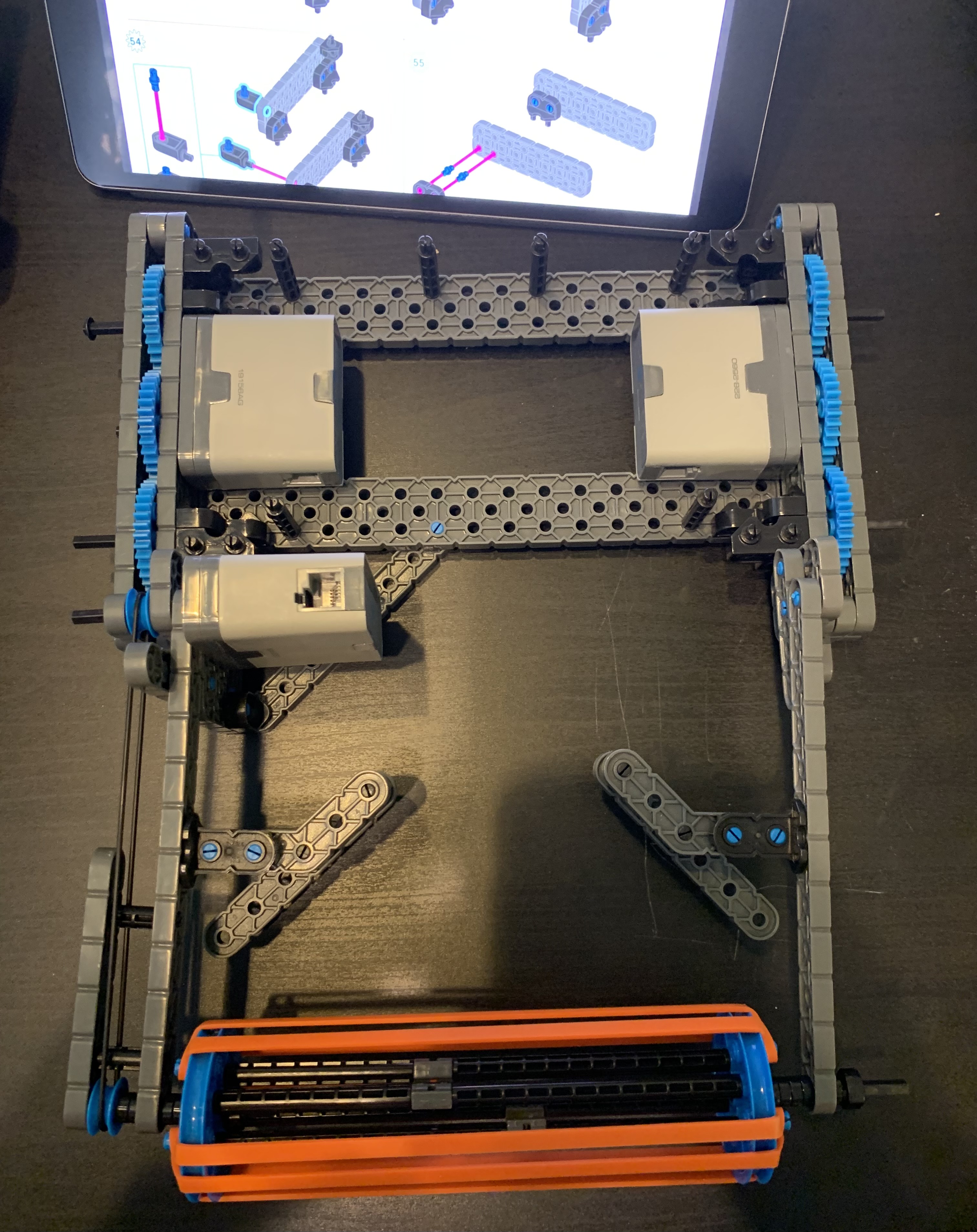 I replaced the belt with a #64 rubber band, which required much less tension and actually worked pretty well – I was expecting the rubber band to slip off considering that a pulley for a flat belt would usually be the opposite shape. But the rubber band spun the intake just fine.

However, when I tried to intake a Turning Point ball (the only thing I had around the house that was the right size), the rubber band slipped against the pulley before the ball came in all the way. I switched back to the 60mm belt and it was able to intake the TuP ball – but it really is bending some of the plastic parts a fair bit, I will definitely be taking that belt off for storage. Rise Above Pitching In balls weigh just under half what the TuP balls do, so it’s possible that the robot would intake the PI balls just fine with the #64 rubber band. Bank Shot/Squared Away balls would’ve been a better analog but I didn’t have any handy.

I also experienced a lot of problems with the pullback mechanism getting caught on itself. I replaced each of the shaft bushings with a pin and a spacer and that made things run much smoother: 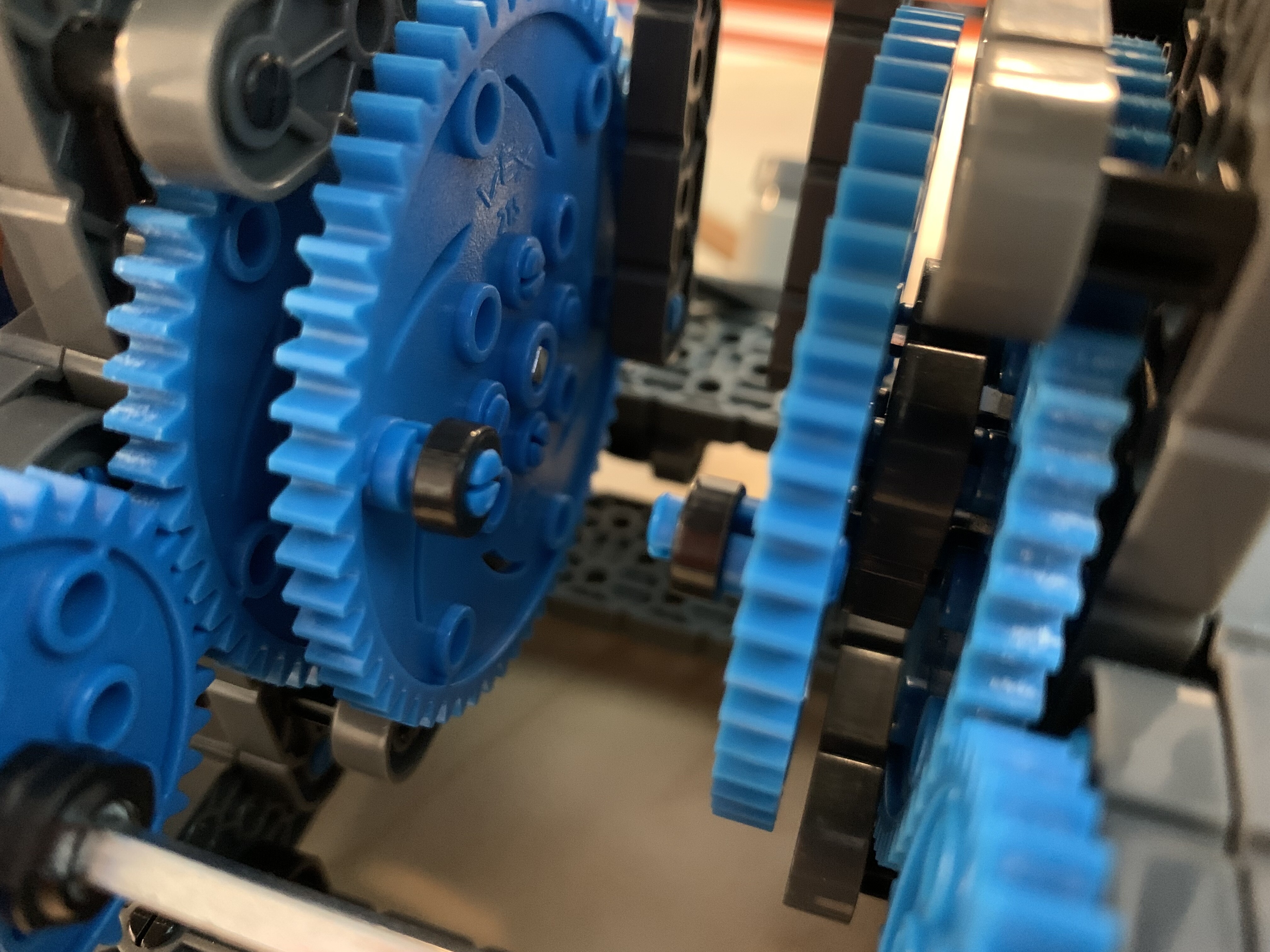 Looks like the pins stick out from the gear a hair less than the shaft bushings did, which is just enough for them to clear the 1x6 beams as they pass by.

Also, the brain is mounted in such a way that half the ports are blocked – I added a gyro to the robot and then that was it, I was out of accessible ports. I think a great first modification for a team to design would be to mount the brain in some other orientation so that all 12 smart ports can be used.

Thanks for these tips. I’ll keep an eye out for these things when I build Fling.

Did you mean Pitching In balls?

Did you mean Pitching In balls?

Yes I did, apparently I haven’t internalized the new game name yet

We also found wiring the motors/sensors to be a real pain. I would suggest running the wire soon after installing the motor even before the end when the instructions prompt you. After you bring the two major pieces of the chassis together the best route for wires becomes inaccessible

Or got shot all over the room like rubber bands

I just built it today and I can’t even find the pulleys. I know I pulled the pulley “stuff” from the kits a while ago… And I’ve moved rooms since then. I’m not hopeful.

On my first build attempt it didn’t even fit under the low bar… I did a quick double check of the obvious things but not sure what I did wrong, if anything.

but rubber-band guns are banned.

In this vein, I am trying to determine how to prevent students from pitching the Pitching In balls at each other.

In my classroom, timeouts usually do the trick… A day, to a week depending on the nature of the infraction. I have years of computer work for them to do…

On my first build attempt it didn’t even fit under the low bar… I did a quick double check of the obvious things but not sure what I did wrong, if anything.

Almost like it was designed to not fit under the bar without some modifications.

Yep! Ours is also too wide for the rules (but we used Omni wheels).