I’m in the process of standing up 10 new VEXIQ rookie elementary teams. While I normally would have run sessions with parents to teach them how to build, rules, how to mentor, etc. It’s been suggested that I get some senior/junior VRC builders to be the VEXIQ mentors. For those of you that have done this, how did you set up, what training did you do / wish that you had done, other things I should be aware of. Thanks!

We have tried having older students help out, but not whole heartedly. Sounds like you would have the students replace the parents as mentors. We were just using them to assist. The main challenge for us was getting the students to attend regularly. That might be partly because they knew their role was not essential, but mostly because of the time commitment.

Younger students generally respond better to older students than they do parents. But of course that all depends on the personality of the parent or student. You can have the same challenges with older students as you do with parents. They can become too involved, take over, and then it’s their robot. Continuity can also be an issue, if there are many VRC students helping, but they are all offering different advice, or don’t know what the IQ kids have planned, or what their progression has been.

Please keep us posted on your progress. Let us know what works for you. Good Luck!

I agree with jrp62 - keep posting and let us know the progress.

When my son was doing IQ in 4th grade, the coach was overwhelmed but didn’t solicit parental help (It was late-season offered and happily accepted). They had a single mentor but as mentioned, there were time constraints and I think the eagerness waned a bit. My son was the team programmer and the mentor was simply doing all of their coding (I guided my son into doing it himself when I discovered this…then had him go to the mentor if he had trouble).

VIQ in elementary school, IMO, needs a careful but steady hand (ymmv of course). The kids certainly look up to and are excited about HS mentors way more than they are with parents. But parents can greatly help with keeping teams focused and engaged and organized without taking over their projects. This is especially the case if you want to run them through the VEX curriculum or labs after school.

As a parent, I would say to be sure that you lay out roles, expectations, etc., to parents who want to be involved (or who you need to be involved). I remember, at one event, seeing 5 team dads on the practice field resetting while one of them updated code and the only kid around was trying to juggle a couple of Squared Away balls. You don’t want this. What you do want from a parent is to have the juggling ball kids focus on resetting the field and practicing and editing code themselves.

We started our first IQ team, back in “bankshot” with one of our HS Senior teams as their coaches. (The IQ team is the four shortest kids in the picture). It worked out well for us. We kept this up for a few years, but then transitioned to having a parent/coach for each IQ team (we’re a community team, so it probably makes this a little easier), especially since we have four times the IQ teams as VRC teams. The transition was made not because of any issues with HS kids, but because they just didn’t have enough time for their own team as well as helping out. Since then, it’s generally members of our U-team that help out the younger teams, but it’s generally less formal, helping out as-needed rather than as a full-time mentor/coach. 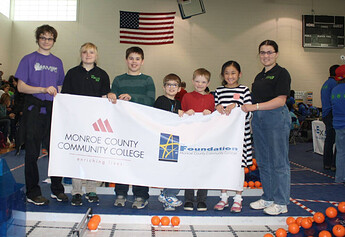 We are a private school based program. I am simply a parent volunteer and head up the program. I have a parent over each of our teams. Last year we had 7 teams. I work on mentoring the mentors and providing them all the info I can. My two kids are on one of those teams and I spend more time with them, but they also have a mentor over their team. Some mentors are all in, some are not. As said above YMMV, but we do our best to provide each team an opportunity to participate and learn.

I have 70+ IQ teams in my district over 27 campuses, plus we provide support for a couple of private school teams that are within our district boundaries. Between my two FRC teams we have just under 100 high school students. We require students to have 50+ volunteer hours to reapply for the FRC team the next season. We also promote the President’s Volunteer Service Award. At the silver and gold levels the booster club purchases the medals for the students and they are allowed to wear them at graduation. This helps us to provide at least one high school student at each campus to help with teams that are reliable to be at each practice and tournaments throughout the season.

To volunteer with an IQ team we have them complete the head referee certification and come to a 3 hour training class with me where I go over the game, how to do game analysis, how to follow the engineering design process for IQ, and most importantly programming basics for IQ.

The teachers put in a request at the beginning of the season if they would like a student worker(s). Many will request specific students, but most just want help. We try to pair students with the school they went to when possible. Students who want in fill out a form and request their top three schools knowing their proximity and the practice schedule for that school. I then work with the coaches to make the pairings.

This has helped us tremendously more than double our number of teams from launch in 14-15 to today. Last year 961 students submitted an application for an IQ team. The only thing holding us back is the number of total coaches, whether adults or high school students to continue to grow the number of teams.

Our goal has long been to “Engage students in engineering before stereotypes take hold”. I’m doing the same in trying to figure out how to add 10 more teams each year to try to catch up with demand.

Thanks for all the great responses.

Up until now I’ve started and run VEXIQ teams (each with multiple robots) with teachers and parents. Most I’ve been able to get to 1 robot ~ 1 adult and it’s worked out well.

I got great ideas out of the responses. I think I’ll go for a hybrid, continuing with 1 robot ~ 1 adult and then use my HS VRC members as roving help as needed. I will get them to redesign and present my current adult VEXIQ training (game, build techniques, code of conduct and the red/yellow/green zones, etc)