How did this happen?

So appertly, our team, 97310A has made it to states. With a clawbot. (We are a first year team, don’t judge lol). I mean, our clawbot has some modifications made, but we aren’t the most advanced. Anyone ever had a similar predicament? If you have some tips for going to states with a not-so-great robot, those would be greatly appriciated. Thanks, and have a wonderful day!

At least this year, your alliance will super love it if you can score one ball in the corner for autonomous, help with the home row.

as a first year team with a clawbot, don’t go into states expecting to win very much, if at all. instead focus on learning and having fun as much as you can, so that next year you’ll be able to build off of your experiences this season and move beyond a clawbot.

How long do you have till your state comp?

Data needs to be submitted by like April 18th so it needs to be earlier than that, most they have is one and a half weeks.

How long do you have till your state comp?

According to RobotEvents, it’s in 8 days.

You would be surprised how far the bare minimum gets you, even at your state championship. First of all, if you don’t already, you should consider submitting an engineering notebook; many teams actually don’t even do this, making you a big competitor for a judged award, even with a basic notebook. However, my biggest recommendation to you is focus on being able to consistently score 1 ball during the autonomous period. Once you can do that, you can get more ambitious and try scoring 2 or even 3 balls (full home row), if time permits. The autonomous period routine is one of the most important things that will win you matches and make you stand out to other teams, which may help you secure an alliance with a talented team. In fact, you’re already a pretty likeable team, because you managed to make states despite only having a clawbot. That’s legendary. 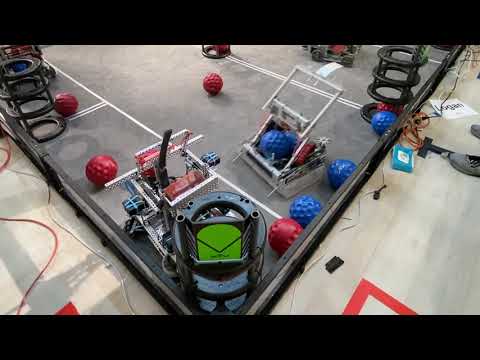 Agreed… Focus on improving autonomous and what you do well. Focus on supporting whatever robot you are paired with and learn as much as you can. Last year, one of my teams took a modified clawbot to our states. They had a simple yet reliable autonomous, always worked with their partner, and were skilled drivers . Lots of people derided their robot… until they earned 2nd seed for alliance selection. They missed taking that clawbot to worlds when their alliance partner was disabled in the finals (The refs even considered a DQ on the winning team). Take a great attitude, work ethic, and an expectation of simply learning and you might be pleasantly surprised.

We can score 1 ball during auton, working on two. Thanks for the tips!

Make sure you are using all 8 of your motors.

I would say be social which is what killed us our first year into state, we had a pretty good bot but had bad matchups so we weren’t chosen because people didn’t know what we could do

If you have some tips for going to states with a not-so-great robot, those would be greatly appriciated.

No, it was accurate.

While robot design does matter, many a team I have seen with an epic robot and no driving practice do poorly in a competition (out team included). On the flip side, there can be a clawbot with hours and hours of driver practice do better than teams who spent all their time on their robot.

Anomalocaris, I guess we’ll have to agree to disagree.

While robot design does matter, many a team I have seen with an epic robot and no driving practice do poorly in a competition (out team included). On the flip side, there can be a clawbot with hours and hours of driver practice do better than teams who spent all their time on their robot.

We agree on this

EDIT: Not a clawbot, a crunch bot lol sorry people

Another thing I would say, now that you’ve said this, is to make sure you have a de-scoring stick (if you don’t already), and make sure you practice with it. In this game, your alliance partner will be happy if you can quickly de-score opponent goals.