How do i build a gear box for my flywheel?

I don’t know how to build a gear box for my fly wheel their are all those videos but they never show the inside. I know some of you will say just use a catapult its better but i cant because i designed my robot for a fly wheel already. Could one send a picture or like a flywheel’s inside or a video because i don’t understand when people say like 1:15 gear ratio.

For gear ratios, 1:15 means that the one side spins 15 times faster than the other. The way you would do this, is to geer 2 shafts together. Have the motor attached to a big geer, and have a small gear mesh to it. This will make a fear ratio: #of teeth on small gear : #of teeth on big geer. To make the ratio bigger, add another big gear to the shaft with the small geer, an mesh a small gear with it. 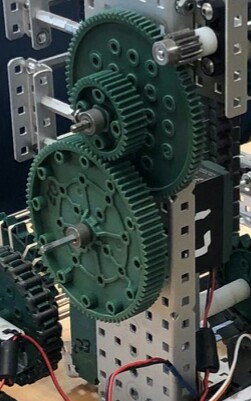 This, but with VEX IQ parts

So do i do big gear then medium gear then big gear?

what you see is “compound gearing.” Here’s an IQ-based video that might be of help: VEX IQ Mechanisms - Gear Ratio - YouTube

Right. A gear in a train, between the driving and driven gear is just an idler. It’s size doesn’t really matter (at least with regards to changing ratio). In the picture a few posts above, the smaller gear is bonded to the bigger gear, creating the compound gear system.

Oh thank you, I get it so 1:15 is the picture above and it uses big medium big small so its extra fast.

So do i just use big medium big small gear in vex iq parts to make my fly wheel?

I’ll send pictures of the robot and the fly wheel later because im currently at class right now. 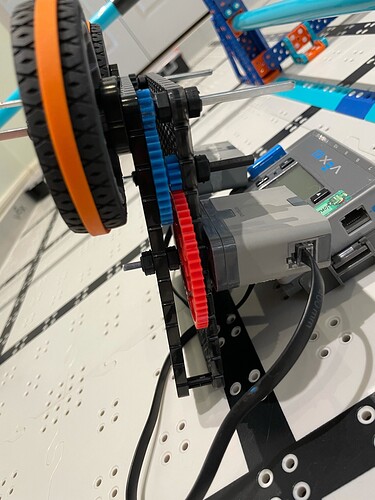 that is a good example of compound gearing.

Ok thank you for helping me ill test it at lunch time.