How do I calculate initial disk speed as it is launched out of a flywheel?

I am trying to calculate the trajectory of disks as they’re launched through the air but in order to do that I would need the disks initial velocity and I don’t know how to calculate it. My team’s bot uses a single flywheel that has a 600rpm motor connected to a 5:1 gear ratio for a total 3000rpm output. The wheel itself is the regular 4 inch wheel. If someone could provide what equation to use or what else I’d need to calculate it, and also how to calculate it, I’d greatly appreciate it, thanks.

The discs initial velocity will vary based on the amount of compression. A way to figure it out is to establish a background reference (for example a 1 inch square grid) and place it behind your flywheel. Then record your disc being fired, find how much it moved in 1 frame and use your frames per second to calculate speed.

To expand on EcstaticPilot’s advice…

Use the fastest frame rate available to you. I assume you will probably record with a cell phone and depending on the settings, your framerate can vary. Standard video could be 24 fps, but is probably 30. Recording in 4K will probably use 60 fps. You will hopefully have a slow motion setting that can record at 1/4 speed (120 fps) or even 1/8 speed (240 fps). Look through the settings and know the frame rate beforehand.

Also, I’d measure the distance the disk moved for more than 1 frame and divide by the total time for those frames. This would reduce measurement error and the disk probably isn’t slowing down much in the first few frames. In a pinch, you could estimate the distance using the 1/2 inch hole size of VEX structure, but a motion grid would be best.

Even if you don’t want to measure the speed, looking at a slow motion video of the flywheel can help you troubleshoot. Here is a quick clip one of my teams took. It helped then tweak the disk being fed into the flywheel, but could easily give them the launch speed. (it was shot at 240 fps, but is now a 10 fps animated gif.)

Notes:
If this looks familiar…Most of their members are new and they started with the blz-i robot, but made a number of changes.

What they gained from this slo-mo video…

You might also consider using a chronograph. There are different model’s but one that uses a large detectable area to sense the disc could work. A chronograph will give you the fps (feet per second) or mps (meters per second). You could also use a slow motion video, calculating how many frames it takes the disc to go one foot, then converting the frames to seconds, giving you fps (mark rober has a great video on this, but I can’t access youtube as I am on school wifi.) 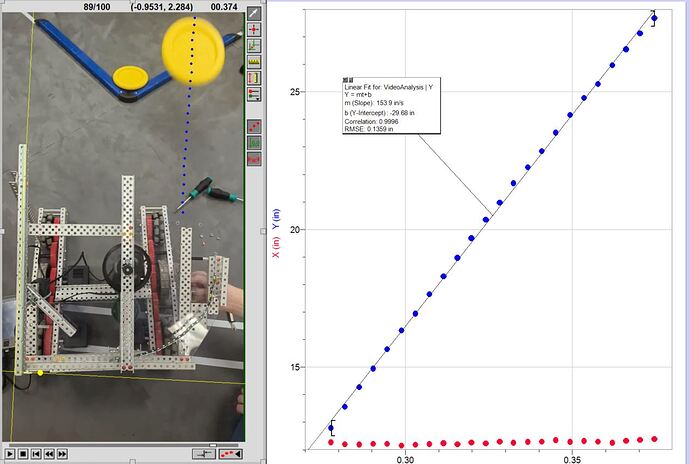 Several have posted how to measure initial disc velocity but not how to calculate it, which is what you asked for.

NOTE: This is tangential speed of the flywheel, which accelerates the disc by touching the side, specifically, only 1 side. The other side touches (for most bots) the frame of the launcher.

This means that initial disc speed is 1/2 of our calculated theoretical maximum value, or:

Now, go compare this theoretical maximum with measured values and see how they compare.

Do you mind elaborating on why you divided the answer by 2?

Because if the flywheel touches the disc on one side, pushing it forward, the disc (on that side) has the velocity of 52 ft/sec. What velocity does the other side of the disc have as it touches the side of the launcher? Answer, zero.

So the average velocity (center of the disc) is the sum of those two numbers, divided by two.

If your launcher has dual flywheels, the rule still applies, but in that case, the average is the same as each launcher wheel… so the calculation is moot.

Professional Engineer here but I am not knee deep in VRC, so forgive me if my perspective is out of place.

It seems to me that you would simply chart this imperially. You can build a chart of various rpms and launch angles and measure the distance flown. You then can take these observations and back them in to any of the standard projectile equations and infer your Vo or other desired unknowns.

A quick visual to possibly help that uses the combination of translational and rotational motion… (I started this reply this before turbodog replied, so here it is anyway.

The round object is the disk (not the flywheel) and assumes the the disk does not slip at all. The flywheel would be imparting a velocity at the top . 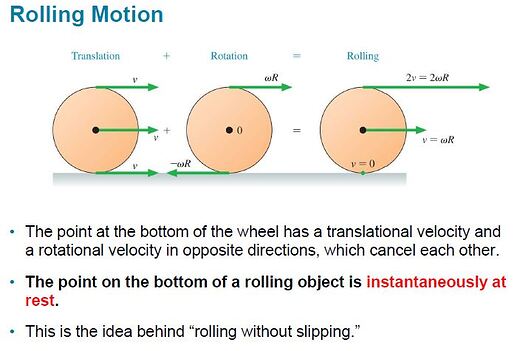 .
Also, the flywheel in the clip was 5:1 on a blue 600 rpm motor… so theoretically 3000 rpm like in turbodog’s example. I don’t know what the actual rpm was, but it is certainly lower than the theoretical 3000. The point is that it will never get up to that theoretical speed and it will slow down some when engaged. In my example, launch speed was about half of theoretical… 13 ft/s vs. 26 ft/s

I love to see my kids work through the theoretical calculations, but if they don’t realize their limitations, they are often disappointed when designs don’t work as well (cant shoot far enough, high enough, etc.)

There are obviously things you can do to improve this (bearings, flywheel mass, etc.), but expect some drop off and plan for it when calculating launch angles and distance, etc. To be precise, you’ll need to get the actual data from your robot.

That’s another method, for sure. It needs consistent launch data… and I’m seeing a fairly wide variation in launches due to flywheel rpm not up to speed, flywheel rpm fluctuating, inconsistent disc/flywheel interactions due to build issues/indexer variations/etc.

Depending on bot design, you’ve got some disc scrubbing after launch and before it leaves the chassis into ‘flight’.

In case it was missed in the calculations, I think it’s interesting to note that the wheel itself is running at 36 mph for 3k rpm wheel and faster for the 4200 rpm ones… not something you want to stick a finger into.

Just to update… the team in the video clip added a ball bearing, added a single flywheel weight, and tweaked a few other things. Launch speed has increased from 13 ft/s to 19 ft/s. Now they are looking to improve their channel design for a touch more efficiency.