How do I create an indexer without pneumatics and without slip gears?

I haven’t learned how to use pneumatics yet, so I am going to use a motor indexer. I don’t have enough time to create a slip gear, so are there any other designs that can act as a motor indexer?

You could use flex wheels underneath or to the side the magazine of discs that quickly feeds them into the flywheel. I haven’t tested using other wheels but I imagine 2.75" omnis with rubber bands on them would serve a similar function.
3759x early season reveal
Virtuoso used a ratcheted motor indexer with a flex wheel to the side of their magazine of discs

I’m not sure how practical it is without testing it, but you could code the motor to draw back a certain number of degrees before setting it to coast. This should mimic a slip gear but again, I haven’t tried it yet

Or spin forward then spin backward 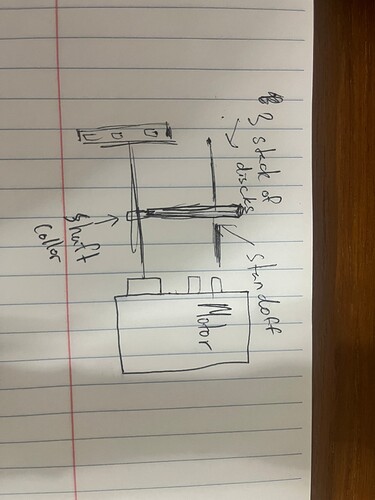 This is our idea for our indexer. Basically because the stand-off pushed the disk from the back into the flywheel. It’s basic and it works as long as the stand-off is just the right height. In the middle of our polycarb resting area we had a slit for the stand-off to go through.

We didn’t have much space so this was quite compact and it also allowed us to rachet it so when ur moved the other way it would launch endgame.

I was not able to find any images of the actual thing.