How Do I Make My Flywheel loose less rpm when consecutively shooting discs?

I have a flywheel shooter on my bot right now, but it looses a lot of rpm between shots and I would like to minimize that so it could shoot faster. Any suggestions?

If you have space you could also add an accelerator wheel

In no particular order:

what is an accelerator wheel?

In 5090x reveal I explain what they are

if your flywheel is only one flex wheel, try adding a second one to increase weight.

Flywhel weights is ypur best amd easiest option. Either the standard vex ones or take an j84tooth gear and put screws through all the holes and put multiple nulock on each

Could you explain point 2 further?

You’ve got an 11 watt motor. Whatever power is used to overcome parasitic losses (friction & wind resistance) leaves behind power to accelerate the flywheel.

If you get losses down to 2 watts, that’s 9 watts to apply to flywheel to recover speed after a launch.

If you have losses of 8 watts, that’s 3 watts to recover speed after a launch.

This also helps when spinning up the flywheel from zero speed at the first of a match.

Is there any particular reason to remove the grease from the ball bearings? I thought the goal of it was to reduce friction. If you do remove it, should you replace it with your own oil/grease?

Oil/grease will make the bearing last the longest, but given that this designed lifespan is literally 100,000 hours (give or take), that’s not a real consideration here.

Running these bearings ‘dry’, without any lubrication, will give the lowest friction. If they are not run ‘dry’… then an extremely lightweight oil (and literally 1 single drop is enough) will suffice. By lightweight… I’m talking a specialty oil, something like: 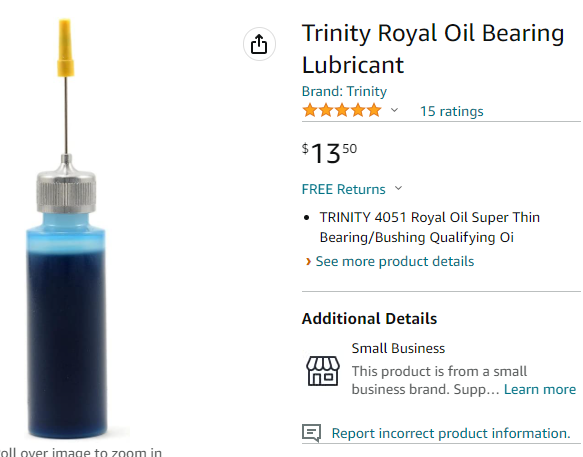 The gain from removing the grease is huge. The difference between dry and a super lightweight oil is very small. I’d remove the grease and not worry about anything past that point.

Can you go into a little more detail about how to remove the grease?