How do i stop the mobile goals from falling forward 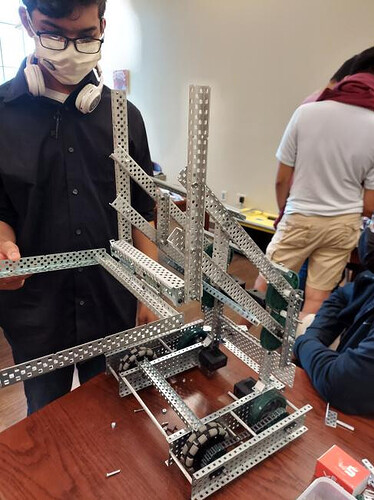 We have this lift on our robot that works, but when we palce a tower on it, the tower starts leaning forward from the weight and starts falling. How could we stop the tower from falling forward?

I assume by tower, you mean mobile goal. If the goal is falling over, than your forklift is not remaining parallel to the ground. Fix that to keep the goals upright.

The best way would to add a triangle brace from the lift down to somewhere on the drivetrain. It could also be due to insufficient crossbracing of the lift towers as a single 5 wide plate is not nearly enough, it could be if you had one on each side of the upright towers but its best to use c channels for crossbracing. An X brace is the best brace type for lift bars and lift towers, followed by K bracing, then just a single bar going across. Those three just depend on what you have space for. And Again c channels of any width is better then plates. I’m guessing this is what your asking as I’m assuming your referring to mobile goals as towers and also talking about your lift towers bending, which when put together gets a bit confusing to read.

additionally, keep in mind how your center of mass changes when you lift a goal. Your robot looks pretty light, your drive is pretty short, and those goals weigh a lot.

What I would do is to add a c channel that just braces it, so it doesn’t fall off. Then I’d make the lift tilt slightly upwards so if it still does bend, it won’t bend enough to make the goal fall. And then also you can add some rubber fabric (I completely forgot what it’s called, I’m the programmer not the builder sorry) that makes it have a lot more friction.

Yes sorry, I did mean mobile goals. I have tried this but i cannot seem to make it stable enough to lift while still being within sizing limits. Is there any way to make it fold in/out other than a hinge? I think that the main problem is lack of support on the robot.

Ooh you meant the flip out mogo holder. I thought you meant the lift was drooping and causing the mogo to slip out. The best ways would be have a more substantial hard stop. Something like maybe 1970Ks early season In The Zone bot or by putting something below so the 2 wide angle has something to sit against.

1970Ks early season In The Zone

That helps, thanks! and yes the mogo is indeed drooping and slipping out too.

by putting something below so the 2 wide angle has something to sit against.

That’s what we did, it hits against 4 standoffs but the mogo still droops.

Another option for that hard stop would be rope