How do you setup multi field displays with one timer?

I need some assistance…

We host a tournament once a month, and I’m trying to figure out how to display each qualification match on their respective competition fields while using a singular timer.

Currently, we run 4 boards at a time for qualifications. For each competition field, we have a smartboard setup running an instance of TM on the computer attached to the monitor. This is great so each competition field has a timer behind them but I can’t figure out how to setup TM to queue up each match to their respective boards while simultaneously using a single timer for all four competition fields.

From what I’m seeing, I can setup 1 field set with the 4 fields under it but then I can create 4 separate audience displays. The control only lets me queue up 1 match at a time. If I try to setup 4 field sets with 1 field per set, then I can’t control a single timer.

Can someone help me walk through what I need to do to get this setup properly? Would love to hop on a call or have a video demonstration. Next competition is December 10th with 60 teams. Plan is to run 5 qualification competition fields and a separate skills field in another room.

5 qualification boards and a separate skills board in another room.

I having trouble following your post. When you say “board” do you mean a competition field? Or does the term “board” mean a computer monitor displaying something from TM?

Are you trying to run Shotgun start where all 4 fields run at the same time?

Yes. We run multiple qualification matches at the same time with a single timer but I want each monitor at the comp field to display the team information. Only way I can do that creates 4 different timers

I understand. TM does not support shotgun starts. Lots of us love it and use it for IQ events (you can get some insane turn times and matches done). @Dave_Flowerday is one of the key TM people. If he sees this it may appear in TM, but it’s a pretty much edge case for most setups. 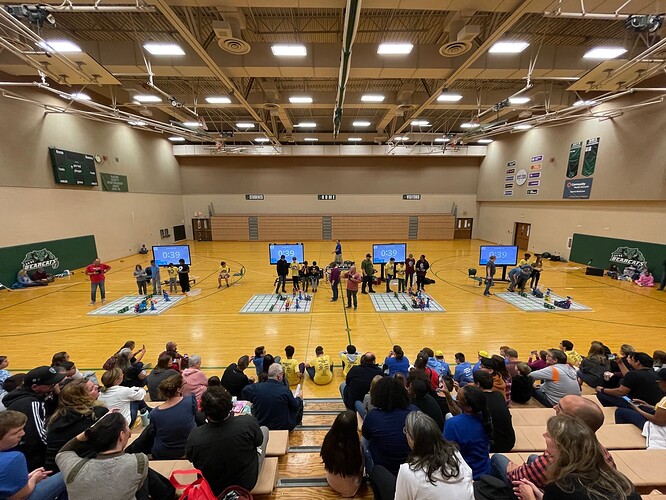 This is our setup from last match for reference

Currently, we run 4 boards at a time for qualifications.

TM isn’t really built for this. You could do 4 field sets with one field in each, but starting the 4 timers at the same time will be pretty problematic. But then the first 4 matches would all be Q1, and the second 4 would all be Q2, etc. You could do a field monitor on each field and then run a timer independent of TM. That would get the matches to come up, then there would be a timer that showed the times. The TM person would just queue up the matches, but they wouldn’t have to run the timer. They would have to queue a lot though with field sets, so the 4 fields in one division would probably be the best way to go…

In short, if you want TM to support concurrent matches, you need to do field sets or divisions. I think the problem you’re going to run into with RECF is the head ref problem. I certified heaf ref needs to watch every match. A head ref cannot observe more than one field at a time, so if you want to run 4 fields concurrently, you really need to have a certified head ref at each field.

A head ref cannot observe more than one field at a time, so if you want to run 4 fields concurrently, you really need to have a certified head ref at each field.

The Head Referee course for IQ is much easier than VRC (no crossed strings and pinning!!)

Yes, as everyone already said, TM just doesn’t support this mode of operation. I could go into a detailed explanation of the history and why it is the way it is, but it’s probably not worth it. The short summary is each field in TM maintains its own timer, and a field set can only show 1 of those field timers at a time. This was modeled after the way events were run back then, which had the audience (and camera operators) focusing on one field at a time.

I know this method of operation (“shotgun” as Foster calls it) is probably becoming more desirable with the growth of VIQC. I’ll try to think about if there’s some relatively easy way to tie multiple timers together (it sounds simple in theory but there’s some corner cases to watch out for). We have to be careful though not to add additional setup complexity to TM, as the whole fields/field sets thing is already (too?) complicated.

Roger. Got the idea from State competition where they run 2 matches at the same time. Drastically cuts down the amount of time it takes to get through 200+ matches in a day.

Since IQ has no field control hardware, you can approximate it by having one or more audience displays visible to all the teams so they can see the timer. You can additionally have field displays next to each field if you want to be able to show the next teams on deck for that field.

Have matches 1-4 set up on the fields, queue up match 1 and run it. After that, set up matches 5-8, queue match 5 and run it. Teams will look at the field monitor to see field assignments but then look at the audience display monitor(s) for the timer. If you don’t care about having the upcoming matches shown at each field in between, you can just configure the monitor at each field to be an audience display. I think that’s what was done in the picture above. The audience display will only show the teams from match 1, 5, etc. so you’d have to just overlook that.

There’s also an “Upcoming Matches” pit display that you could use - have that on one screen somewhere so the queuers can see the matches coming up, then just use audience displays at each field so teams see the timers.

I’ll trade buying a 5th monitor, putting it in the center and making it the audience display over adding complexity.