How Much Does Warm Weather Affect Motors?

So, it’s about 84 degrees outside right now and the garage door is open while I’m working on my robot. I noticed while practicing driver skills that my base started to just… not work. It was as if one of the wheels was not working and so it was near impossible to turn. However, when I tested the wheels, the wheels seemed to all spin that the same speed, so it seemed like a case of overheating since when motors are warm, they lose a lot of torque in order to try and stay cool. I gave the robot a rest and it started to work fine again for about 20 minutes before the motors stalled again. Keep in mind I have an X-drive base, so any hot motors would kill my base since the loss in torque is already so large. It should also be noted that my base has never overheated before until today (unless it’s a mechanical issue, and not motors overheating). How significant is the effect of warm weather on the motors? Is it a factor I should be wary of for the World Championship, since it is almost summer time and temperatures are rising? Or does this seem more like a mechanical issue? Might be a bit of a dumb question but I’m curious if anyone else has any experience with inconsistent robot activity while working in warmer temperatures.

I would think that temperature could have significant impact on some of the more power demanding functions of your robot, such as a drive. a robot will likely be able to run much longer in 50 degree weather than in 90 degree weather. It’s probably a good idea to be able to compete fine in higher temperatures, in case you encounter a lot of heat during worlds. being able to drive for 20 minutes straight before stalling seems pretty good to me, since you’re never going to have to do that during worlds.

At my team’s regional championship, it was pretty hot. It was like 90° outside (all of the fields were outside but covered by pavilions) and 80-85° in the pits: (our pits were inside in a semi-ventilated area and other teams had their pits outside, but covered by a tent).

The weather caused our motor to overheat in our later matches, especially in our 3 almost back-to-back matches. As the majority of the competitors could attest to, the weather certainly did not help their teams’ performance throughout the competition.

As a matter of fact, in one of our qualification matches, we had to stop driving our robot because the drivetrain was too overheated. Our sister team’s intake motor (they had a 2 motor intake with no spare motors/cartridges available) overheated to the point of un-usability (thus they had to resort to defense in their later matches). Our mentor even had to leave the venue for a short while to get us more cans of compressed air for our robot (thank goodness for that). The heat was so bad a heat pocket/bubble formed on the field being used for SF #2: 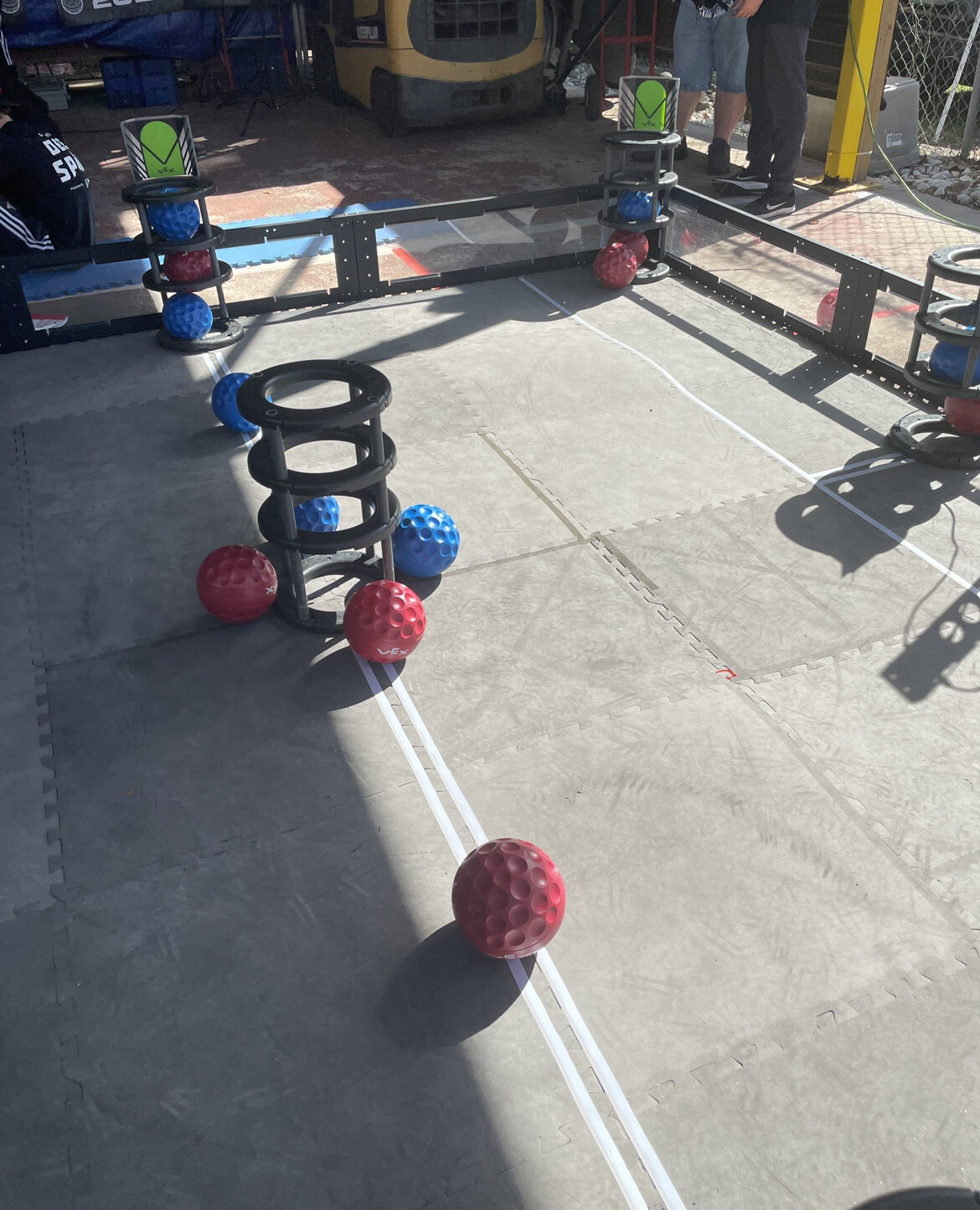 (this photo was taken directly after the aforementioned semifinal match. Notice the curvature of the red alliance home row tape line)

For the finals, the EP graciously decided to give the alliances a couple minute “robot cool down” break in-between each match.

Overall, I would say that moderate heat (70-80 degrees) shouldn’t have too bad of an affect on your robot, as long as you are making sure to cool down your motors every once in a while. But if the temperature gets higher, things will most certainly get worse,

I am not so sure is it due to the environment weather or just a simple case of working your motors too hard.

In Singapore, our daily temperature is an average of 90 to 93 degree.
So far it doesn’t feel like our motors will work better when we were in USA than in Singapore.

But again, we normally run our robots in aircon room… seldom do it in a non-aircon room though .

In my team’s case, I am pretty sure it was the heat. We had never had any major overheating problems at our school where the temperatures were well below 90 degrees. If anyone knows how bad FL weather can get then I bet you will know how we (and our robot) felt after a day in the sweltering heat. No wonder why the EP gave the teams in the finals time in-between the matches to cool down their robots (we also did this the next day in the VEXU event, and although I am unsure if it was done for the MS event, I would presume so too), Even if it was due to robot over-working, I’m certain the didn’t help.

You can query motor temp in code, then display it to the brain or controller. We routinely include code for this in all projects.

The motors drop down to about 25% power at maybe temp ‘55’ or so. Then shutdown completely at maybe ‘65’. I’m going from memory on these temps so check/confirm. And I’m not sure these readings are actual celsius/farenheit temps or some arbitrary number.

They take a WHILE to cool down, so begin countermeasures at the first sign of rising temps.

You might want to check this stuff for cooling motors instead of the canned air. It comes out as more of a liquid, evaporates quickly, leaves no residue, won’t attack plastics, and is designed for electronics.