How to improve my claw design?

hi guys! I’m new to V5, and I want to ask on how to improve my claw design (it’s basically the clawbot design but the claw is custom)… please help 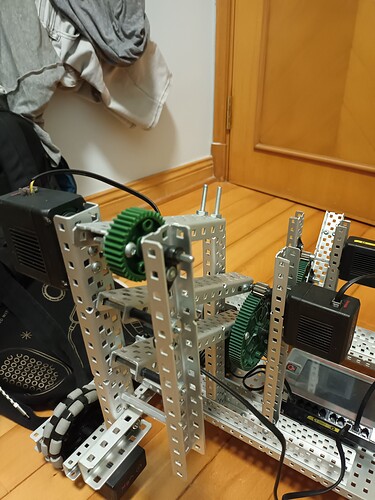 What issues are you having with the claw?

Well, it’s highly unstable, and it doesn’t firmly lift the mobile goal that well… the mogo feels like it’s on the verge of falling of the claw’s grip

Maybe instead of using screws to grip the MOGO, you can try adding standoffs instead.

what i would do is set our claw up so that it has a design were you have a pice of C-channel that would sit Parallele to the ground so that the pice of c-channel will sit under the lip of the goal. then have your clamp set up so that when it is closed it sets on the goals at a 90degree like this
VEX Tipping Point - 4 Bar Clamp Leak - YouTube

I would recommend what @TimmyOsborne said, putting in the piece of c-channel that grips the lip of the goal wider. Once that has been installed, maybe try playing with the length of the claw a bit until you find a good grip on the goal.

Using vex bumpers on the end of standoffs instead just bear metal would help as well.

I’ve tried a 4 bar design and it didn’t really work… now I’m trying this deign and it’s slightly better than my original one… one problem now is the the motor for the grip is not strong enough to hold the motor, and that it would slip away from the motor evrytime. 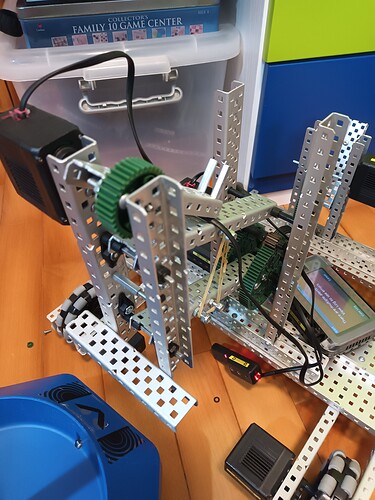 Can you show us how it grips the MOGO?

the grip is not strong enough

Try creating a gear train such that the motor is driving a 12T pinion that meshes with your 36T gear. This will quite literally and mathematically make your claw three times stronger at gripping the mobile goal.

Video should be there, but one problem I’ve just found out is that it wouldn’t lift the mogo after lifting it for a long period of time, like it gets tired =(

Okay, will try! That is if I have an extra 12T gear though

What did you set your motors settings to? Usually clamps should be set to “hold”
edit: if you have anti-slip mat, you should be using that too

Try to move the claw c-channel down 3-4 holes so then the standoffs are parallel to the vertical edge of the goal. This will reduce motor strain as the goal will more naturally slip into the claw.

Make the space between the standoffs bigger. It will add more strength to the grip, and will not make it fall of as easily. If needed, have a 5-hole C-Channel, put the standoffs on both sides, then use vex-approved rubber bands to put around the standoffs for more grip, like this; Rubber Bands - VEX Robotics or use spacers (Not recommended) Kind of like this

Reply with any questions, I’ll try to help. 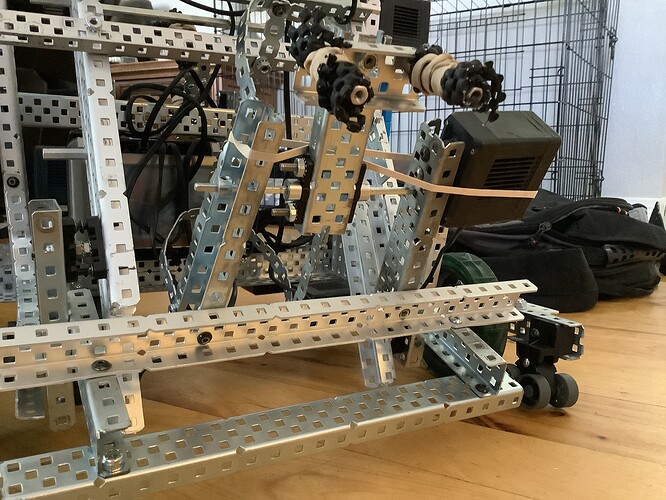 I have a question. Almost all teams I have seen use standoffs to hook onto the goal, but my team uses a C channel, 90º angle gussets, to another c channel with rubber bands around it for grip. In almost every tug of war we have gotten into over a mobile goal our robot has won because the other robots claw used standoffs and lost its hold on it, while we were able to hang on. What is the advantage to using standoffs as compared to what my team uses? So far our design has worked pretty well (strong grip, hangs on well, easy to grab on, less accuracy needed than when using standoffs). For any teams who use standoffs or screw or something similar with something being used as teeth/prongs to hang on, why did you pick that design?

I dont have a picture of our claw right now so here is some images I pieced together so you can have an idea of what it looks like. 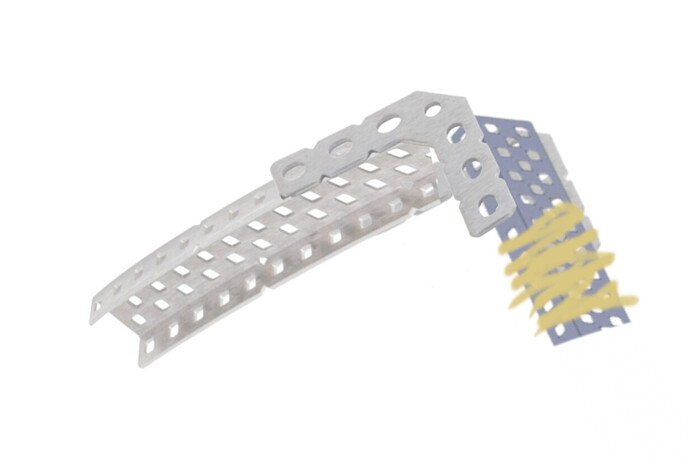 So make sure you have a torque cartirge in the motor(a red one) and you can gear it down by putting a 12tooth pinion linked to the gear so it will move sower but you have a higher gripping force.

I really don’t know. Our team uses that same design but with non-slip mat instead of rubber bands and it works great

Our team uses a similar design as well, but with that black grip netting stuff of which I have no idea what it is called. And it’s the perfect design for a motor powered claw in my opinion because when mounted right, the c channel on the motor is at a 90° angle and can actually hold the goal in with 0 motor power (unless your turning around)