How to make your v5 motors faster in competition

how does everyone make their motors run so fast?

i know that you can get the blue inserts, but is there any other way? My team doesn’t have any, and I have to find the right way to get the ball in the hoop before competition

You can try a gearbox.

what do you mean? I’m new to vex

motors have a maximum power output, it is impossible to increase that.
power is torque*speed. (torque is like the strength, and speed is self-explanitory)

so if you want to increase the speed, you’ll need to decrease the torque.
There are a lot of ways to make this tradeoff, the most common being with gear ratios.

Motor cartridges are just gear ratios that take the motor shaft and increase speed while decreasing torque to get a faster output. The red cartridges have an output of 100 rpm, the green ones output 200 rpm, and the blue ones output 600 rpm. However, the blue ones have only a sixth of the torque as the red ones, because speed and torque are inversely proportional.

Another way you can use gear ratios to increase the speed of a mechanism is through an external gear/sprocket ratio.

The formula for how much you increase the speed by is very simple:

but keep in mind that torque is inversely proportional to speed, so by increasing your speed from 200 rpm to 1400 rpm, you are decreased your torque by the same quantity. which would equate to 1/7th of your original torque. So you can’t just keep gearing up higher without any drawbacks, the power of the system will always remain constant.

hopefully this is helpful in understanding how you can speed up the rotation of a mechanism using gear ratios.

If you’re completely new to vex, I would recommend building the crunchbot, it’s not very good but it teaches important concepts like gear ratios and the most basic construction techniques.

i’ve already built the crunchbot, and now i’m working on one of the “hood” bots

we are using green cartridges

I’ve heard of people coding their motors to go to 100%. Is this effective in competition on driver control and auto?

You might want to post some pictures of your robot so we can help. Videos are even better. YOu may also want to share your code if you think that is why your motors are fast enough.

can you actually program your motors to go to 100% velocity in driver control? if so, how?

All motors can produce 12V with normal legal V5 firmware. This is also 100 percent velocity or 200 rpms (on a green cartridge). The command I use to get them to the speed I want is one of these two:

Yes. Please specify if you are using VEXCode or PROS

but I understand what you’re saying, but will they let you set the motors to 100% using code in driver control 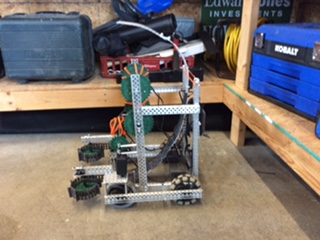 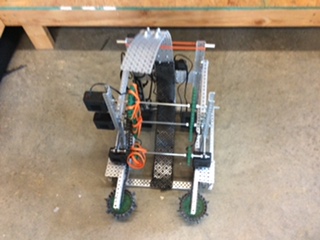 this is our team’s robot, by the way

Having more than 2 rollers would help.