How to prevent disconnection?

Can you expand a little more on the situation. Are you running IMEs? Have you surrounded your VEXnet entirely by a metal box? Is the top of your VEXnet within 2 inches of metal (whatever that means. That criteria is not very specifically given by the manufacuturer)? Is your connection loose? Do you have a bad USB on your microcontroller? Are you using a bad VEXnet? Are you using a weak Controller?

Can you expand a little more on the situation. Are you running IMEs? Have you surrounded your VEXnet entirely by a metal box? Is the top of your VEXnet within 2 inches of metal (whatever that means. That criteria is not very specifically given by the manufacuturer)? Is your connection loose? Do you have a bad USB on your microcontroller? Are you using a bad VEXnet? Are you using a weak Controller?

I also have disconnection problems. My vexnet has no metal above it for at least 6 inches and is also taped to the cortex. I have no IMEs.

Here’s a good photo check our State tournament organizers in VA did for the controllers. 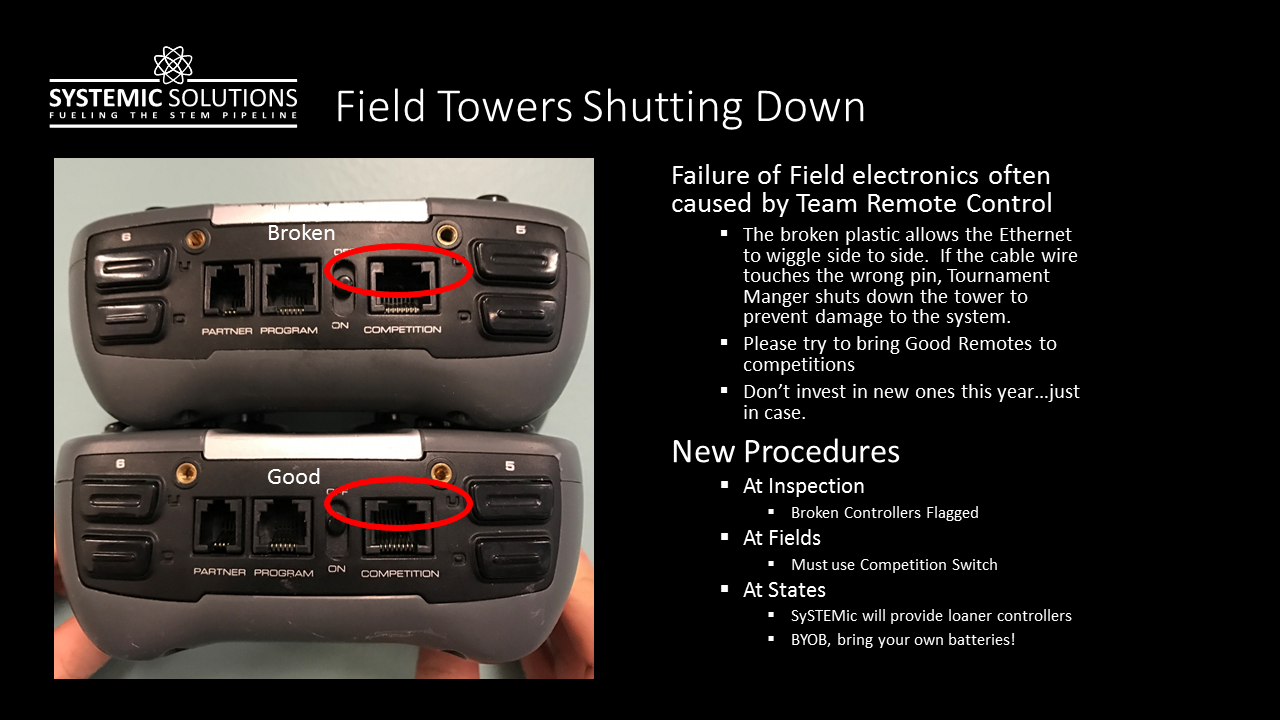 Here’s a good photo check our State tournament organizers in VA did for the controllers.

That slide is a good start but it conflates 2 issues and has some incorrect information.

There are 2 relatively common breakages in VEX joysticks that I’ve seen regularly. Both of these are almost certainly caused by rough handling - so treat your joysticks with care!

If the cable then falls out during a match, and if it does so during autonomous, your robot will lose connection to field control and then be put into driver mode too early (which, depending on your code, may make your robot stop moving). If the cable comes out during driver mode, the robot will remain in driver control but will not disable at the end of the match. Also, the Cortex may reboot when the competition cable is unplugged - I can’t remember if it does and don’t have one in front of me right now. If it does that could cause a momentary loss of control.

Also, if the cable is loose because of the missing tabs, your robot could have intermittent field control, which I believe causes the joystick and/or Cortex to reboot each time it re-connects to the field.

In my experience, I’ve never seen a robot become disabled during a match with those tabs missing. At worst, you lose connection to the field which means your robot becomes enabled (not disabled).

The other common issue is when a pin inside the competition port on the joystick actually gets bent such that it shorts out with another pin next to it.

In this case, some of the control signals are actually shorted out, and this short flows back into the alliance tower and impacts your partner as well (it does not affect your opponent’s alliance, though). Contrary to what the slide above says, Tournament Manager has no way of detecting this and does not disable anything in this case. Since the short does affect the alliance tower and your partner, though, it often shows unusual states (or even impossible states) on the LEDs on the alliance tower. I’ve never observed any permanent damage happening because of this, and on the field control side at least I don’t think any permanent damage can occur due to the fact that all field control signals are current-limited. In all cases I’ve seen, I’ve been able to repair the joystick using a small pick or tweezers to move the pin back into its proper slot, after which everything operates perfectly.

I suppose it’s possible for the first issue to make the second issue more likely to occur, but I don’t think I’ve ever seen any joystick that had both of these issues at the same time.

James Pearman did a great writeup of how all the VEX field control pieces work here, if anyone wants a deeper dive.

It happened to us a lot this season, and we had various problems that were probably all contributing to it (joystick tabs missing, IMEs screwing up the works), but ALSO we recently discovered that we had loose wires on many of our batteries. Hold the white plug on your battery and VERY gently, individually pull the red wire and the black wire away from it; if there is any movement there, then the wires are not securely attached to the plug, and driving around and banging into stuff (like the fence), can jostle the connection and cause a disconnect. We recently hot-glued the loose ones – just a small blob of hot glue where the red/black wires attach to the white connector so that they no longer can come out away from the white plug.

Second, even though we always use a battery extender, it turns out that where the battery plugs into our cortex had become a TEENY bit loose, so that when the plug was pushed to the side (with your hand, or jostled when hitting the fence), it would also cause a complete loss of power. So now we zip-tied the extension cable into the cortex securely so that it has no side-to-side motion and we have not had any problems since.

So it’s worth a few minutes to check out the wires on your batteries (both ends – where they connect to the plug, and where they connect to the battery), and check the battery plug at the cortex (apply a little pressure side-to-side & see what happens; pull on it very gently and see if it’s loose in that direction too, the same force as getting jostled during match play).