How to use IMEs in robotc?

My team this year has decided to use imes on the drivetrain to have a reliable autonmous. I have been looking on this video https://www.youtube.com/watch?v=d9d2gCuUybA. I have put the code exactly the same in my program but, when I run it it never stops the motors. We could just use shaft encoders but, those can’t do pid adjustments. So,if anyone knows how to get this program to work that would be amazing!

It sounds like maybe you haven’t connected the IEMs properly to your robot. Here are a few pointers on that:

Also, you should be able to use a quad encoder (though I’ve never tested that) for the ROBOTC built-in PID. Just select a digital port next to Encoder Port in the Motors and Sensors Setup. You can definitely use a quad encoder for PID that you’ve written yourself.

Lastly, open up the Sensors debug window and make sure that the encoder value counts up or down when you rotate the motor manually. If not, then no code based on that motor’s encoder value will work properly.

All the of the encoders are working and the left is giving a positive value. But this shouldn’t matter because in the video the right encoder is opposite of the left just like mine. The built in pid has never worked for so i am done trying that. Unless you have a way for it to not interrupt the joystick control.

That video uses very simplistic programming, as the author is not much of a programmer (wink). It is not using PID control with the IME’s, so the code might not work if you have checked those boxes.

Looking in the robotC sample programs (File > Open Sample Program > Integrated Encoders > ) there are some examples of using PID control. You are correct that PID and joystick control do not work together. If you want PID in auton, you will need reconfigure the motors at the top of your user control to exit PID control.

First thank you for making those videos they’re the only ones that have helped us! I am not meaning exactly a pid loop just automated straightening, so that we go straight every time. I will look at those sample codes, but your code should work. I’m reading values from the imes but it seems as if the program isn’t getting the value.

You are welcome. Glad people are finding the videos useful. @evan10s listed some things to rule out hardware issues. Other possibilities:
-If those are all correct, it might be you have the wrong IME listed as I2C_1… its the one connected to the cortex.
-If you don’t take abs(sensorValue) then negative values would make the while statements always true and the motor would run forever.

Here is that function for you to confirm against yours:

If, while its running, the local variables show rDiff changing, then the sensors are reporting changing values. You could add a line to save the current sensor value to a local variable in the while loops to monitor what is happening:

I just went onto robots to check if it is getting the values and it is. But the while loop still doesn’t end. I’m getting a solid green light meaning direction. So I am lost

This program should keep the robot going straight correct?

This program should keep the robot going straight correct?

Yes, the code should speed or slow the right side to keep it equal to left.

Do you have a version of the program to work with shaft encoders?

Do you have a version of the program to work with shaft encoders?

Just skimmed through the code. If you declare everything correctly in motor sensor setup you should be able to use his code out of the box.

Can you send me a pic of the settings of the motors and sensors? I believe I have it all right.

Can you send me a pic of the settings of the motors and sensors? I believe I have it all right.
[/quote] 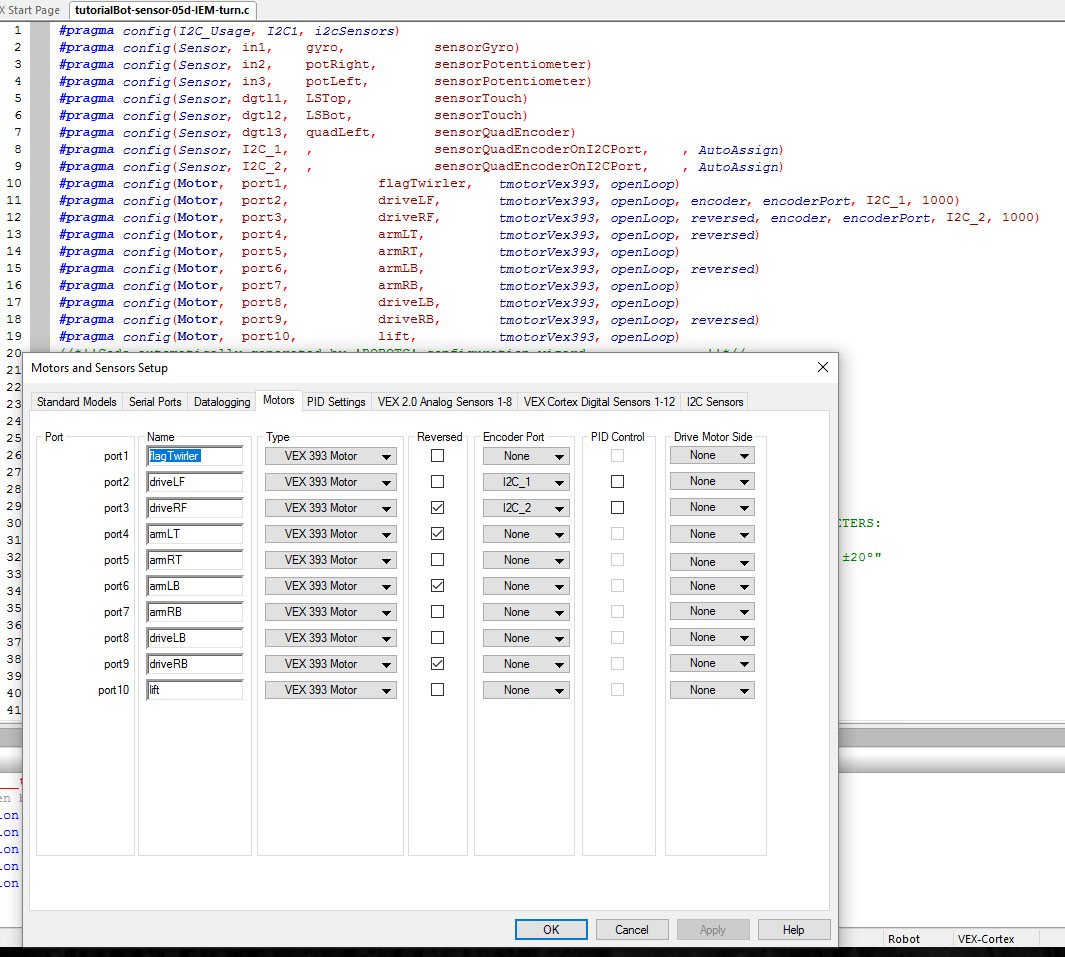 Thank you for all your help, this is all I needed to make reliable autonomous! I was calling the name I gave to the 12c sensors tab, which was the problem.