I’d like to know how resourceful VRC teams are

So basically we only had the competition starter kit this year which means no pneumatics just the eight motors and it has been hard trying to conserve and use less motors on certain things. So I’d like to hear similar stories of resourcefulness or just redneck engineering. I developed a hook system that can have upwards of three goal hooks for one motor, without putting stress on it. Sadly the bois don’t want to rebuild our entire robot to be able to make use of all three, so we’re only using one (at least after we qualify for states, since we are yet to put it back on the robot). You could also make a double 4 bar that is two lifts in one.

I developed a hook system that can have upwards of three goal hooks for one motor, without putting stress on it.

RemindMe! to ask about this after Worlds. I’m always interested in how roboteers make multiple things to run off of one motor.

I’ll probably make a forum post about it once Worlds are done (which we’ll hopefully get to). While for now I don’t want to reveal my secrets, the Vex world should know about the hook so they can convert it into something useful for next game. Im sure next game I’ll come up with some convoluted design that looks horrific but actually works.

RemindMe! to ask about this after Worlds 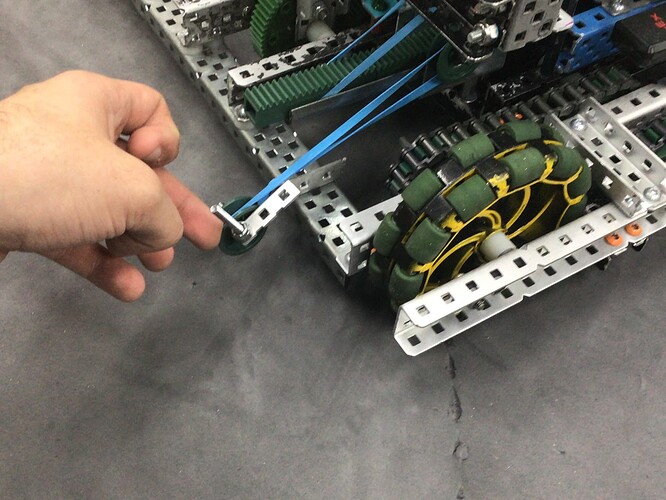 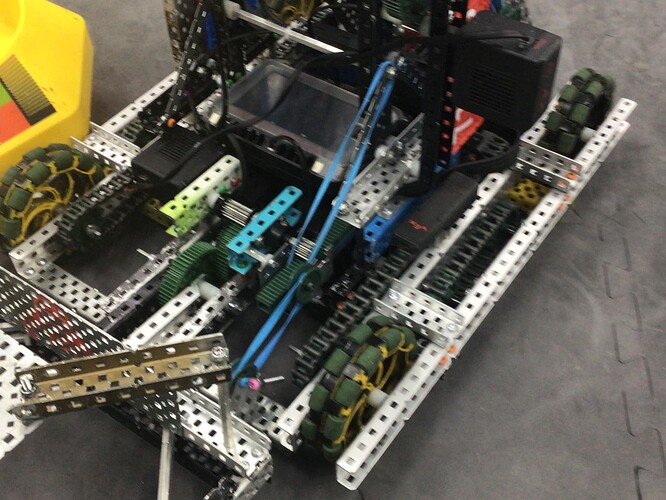 Ok so it’s a little bit wonky, and I don’t actually have an image of the completed hook (that’s lost to time), but basically what I did was attatch a gear to the motor for our back lift, then have that spin a linear slide, and that linear slide has a c channel build attatched to it that pushes a little tiny c channel hook that you can see there. It goes out whenever the lift system goes up, and when the lift goes down, the linear slide goes in reverse and takes pressure off the hook, which then gets pulled back by the rubber band. That means that you can hold two goals at once, one actually in the robot while the other would be just dragging it along. It worked, the only thing was it was very slightly out of size (us geniuses used 35 longs for our drive train and had no space) and our team majority voted to scrap it. Sadly two days after they scrapped it I figured out how to make it in size, but by that time they had already cut the gearbox of the linear slide we used and we were unable to recreate it. It really was super weird, apparently we got very lucky and it worked perfectly when it should be not worked. A tragic end to an overly complex design

when we took apart our robot last season I took home the original gearbox as a memento (everyone got plates that we put on the robot as well, the plate with the red drawing on the second pic is DaBaby plate and kayel took that, I got subtopewds plate) so it still lives on as part of my bedroom