I am struggling with getting the intake to consistently score rings on the alience goals. This is due to the rings moving past or to the side of the post at the top of the intake.

Anyone have ideas/ designs to fix this problem?

I think a good resource would be to take a look at “amogo” Harvard welstake robotics, or 60883d

Additionally, I’d also recommend looking at 99999V and 98548A robotNer⁴ds.

In my experience, getting that ring depositing to happen quickly and consistently has been the greatest struggle this year. I’ll find something that seems to work, and then one day it behaves differently, because subtle changes seem to have a large impact on how the rings react. What we eventually settled on for the ring deposit was this setup: 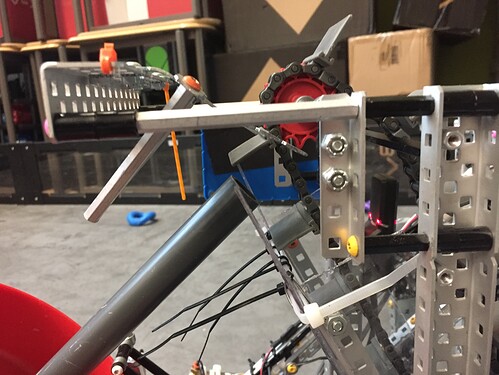 image3264×2448 1.28 MB
The big angle in the front acts as an ultimate hardstop that will catch the rings if all else fails, and it’s a mounting point for the other stuff. The standoffs are what does most of the work here, there are two of them forming a gap in the middle for the post to swing through. Their job is to center the rings and stop them right above the post so they can fall right through it. There are also some bars bent at an angle which prevent the rings from getting spat upwards, which was a problem we had. The end of the polycarb tray has a bite cut into it which keeps the rings supported until we want them to drop, and we’ve put a ziptie onto the tray to slow the rings down before they fall on, acting as a sort of speed bump.

Mounting the standoffs onto the bars was helpful because we had the ability to easily fine-tune their position and angle by simply bending the bars. We also sometimes mounted the standoffs onto rubber links to allow them to comply with the rings, it was strange but sometimes the rigid standoffs seemed to work better, and other times the compliant ones did. Never figured out why that was, but if the deposit started acting up, we’d switch them out at it’d usually fix it.

our accuracy varied anywhere from around 80% to 98% successful ring depositing, but I’d say our average in competition was about 85-90%, which I found acceptable.

Now we have a new robot (reveal coming soon hopefully) and we’re having to redo this whole tuning process, still haven’t gotten it working properly yet. I’ll just say that if you try a ring conveyor, allocate way more time than you think you need on tuning it.

In order to counter the consistency issues other teams face with a traditional conveyor, our team went to with a hook approach: 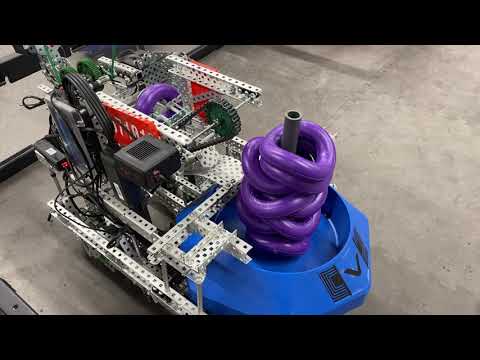 It is extremely consistent, but a little bit slower than flaps (and a lot slower when you run out of match loads).

Thanks for the response, We will definitely try this, especially the standoffs along with the bent metal plat to keep the rings from going over the post. Excited to see your reveal vid!