I’m trying to get an accurate turning method in auton, and I thought the Inertial Sensor would be the way to do that. I created a program to turn the robot to the left, but the issue is that the turning varies wildly from run to run and the angles are just not precise.

I don’t know why these things happen, but I’ve heard only good things from other teams so I figure it must be my code. We have the sensor wired up and attached the way the vex-site recommends, so I don’t think it’s a build issue. 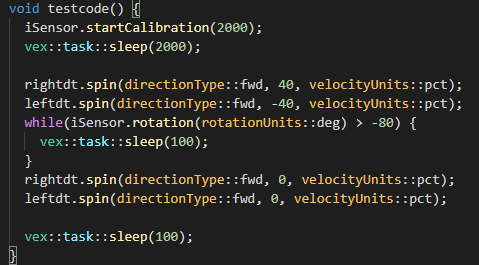 One thing to note is that your pause between checks is .1 seconds (in which the bot will turn a noticeable amount) as well as the motors coasting to a stop (I believe that’s a coast, it might be better to just use motor.stop(hold))

for number 4 you might not be printing the results properly, we’d have to see that line of code

That makes a lot of sense. I’ve edited the code and will report my results tomorrow when I have access to the robot, but this seems like it was what I needed.

make sure the V5 brain is fully updated to vexos 1.0.9

Your sensor might not be calibrating fully. Instead of your calibration code try this:

My gyro usually takes 3-4 seconds to calibrate, so you might not be giving it enough time.