I was thinking about dumpers and their cycle times. One of the biggest problems is the fact that the intake cannot “instantly” drop. This almost doubles the cycle time. Any ideas for ways around this? I was thinking about a transmission with a normal gear and a neutral gear for starters. Perhaps it could be made passive and only activate at the apex of the dump, and deactivate at the bottom. A high hang could still work if the lift doesn’t quite fully extend before attaching onto the pole and lifting.

Perhaps you could use some sort of a slip gear to make it flop down once it hits the peak point.

We brainstormed this idea when we were still in the prototyping phase, and our solution was a passive gravity latch. I’ve attached a quick sketch of the overall mech, and also a sketch of the latch mechanism.

Blue, pink, and yellow represent the same as before, but there is an additional orange standoff and tan-ish rubber bands. The hook is rubber banded so that it wants to stay oriented the way it is shown in the picture, but it can still rotate about the attachment point. As the yellow piece moves down closer and closer to the blue piece, the standoff forces the pink hook #1 to bend backwards (against the rubber bands). As soon as the standoff is past the tip of the hook, however, the rubber bands bring it back in, locking the hook down. Now, the blue segment will move up/down when the yellow segment moves up/down.

But how do we release? Simple; we utilize part #2 of the hook. This piece is on the opposite side of the fulcrum, and functions as a lever to unhook the blue C channel and allow it to fall back down. When this part of the hook hits the red crossbar at the top of the robot, then the hook is pushed open against the rubber bands, releasing the intake and allowing for simultaneous pullback and intaking.

We were able to get this whole thing to work during our prototyping stage without any big problems; the hardest part was probably designing the hook, which we accomplished using standoffs and collars to attach the standoffs at angles. There are probably better ways, like polycarb, but that was just a prototype

If you have any questions or if there is some part of my explanation that isn’t clear, I will be happy to help 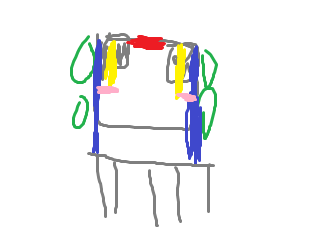 @Bobtheblob
That is pretty great in all honesty. Although I would see some higher level teams being apposed to this due to all the excess weight and large use of space. I have a design in my head (yes, it uses polycarb) that is simple, light, and fits on the link between two gears at any point in the gearing. I’ll think on it a bit more and update in a few days.

And if both catapults and dumpers use it, we could be looking at robots who’s only differentiating feature is the speed at which they intake.

Very true. With improvements on passive intakes later in the season, champs may even have drive speed as the determining factor. Only one way to find out I guess.

@Bobtheblob - 5327B Do you have any pictures / videos of the prototype?

Well… Unfortunately I don’t know if we ever took pictures of the VEX implementation (uh oh!). It was a prototype that we ended up not needing because the dumpapult is able to almost instantly drop down as is, so it was taken apart a long time ago.

However… I do have a short demo video I had made out of Lego pieces. The long, bent red piece represents the forklift, while the combined green-red piece is attached to the gear that is powered. Finally, you see the grey/orange hook that is rubber banded. Dimensions are totally whack and this was before I realized that the hook/powered C channel pieces could be way smaller in relation to the main C channel pieces. Also, the “crossbar” for the hook to react to in this model was weak and kept bending instead of forcing the band to stretch, which is why it seems to struggle a bit the first time in the video.

Lowering won’t double the cycle time, exactly. The assumption driving this idea is that you can’t do anything while your dumper is lowering, which shouldn’t be true for a lot of designs. You can start driving away from the wall, get a game piece ready to drop in your dumper, etc. while it is resetting. Also keep in mind various catapult designs have their own reset delays.

That doesn’t mean there isn’t an advantage to trying to get a dumper to lower faster, just that things aren’t as bleak for dumpers that have to lower themselves as this thread makes it out to be. I think a lot of competitive dumpers will lower at a similar speed to the speed they raise.

Solve the right problems, and all that.