So, my team has pretty consistently been seeing our intake jam up when cubes come in at a diagonal (or sometimes even when they come in straight) and chain on the intake breaking pretty much all the time. We recently strengthened the intake so there was less give, as it often didn’t provide enough friction to push the cubes up. Since then, there’s been a significant increase in intake jams. We’ve got a standard intake with flaps mounted onto our tray.

Any ideas to remedy this issue?

What gear ratio are you using, and just to make sure are you using V5 or Cortex, a single 393 motor may not be powerful enough.

Pictures of the intake?
Also use the tank treads for the intake, I used chain, and it busted up a lot.

We also use tank treads, and it worked fairly well. But no matter the type, the more you take them apart and rearrange them, the more they weaken and break. An easier (but EXPENSIVE) method is to buy a lot of extra chain. And yes, pictures would be good.

Not at school right now, so this is the better view I have of our intake 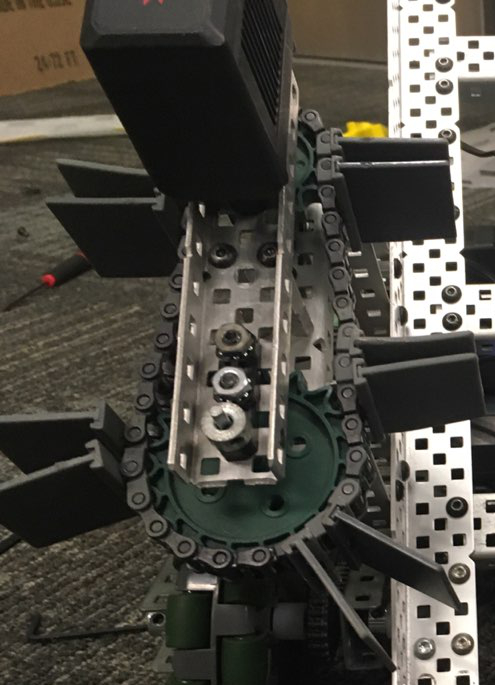 We’re using one V5 motor per side with a 200rpm cartridge.
To clarify, the individual chains aren’t being damaged. When I say breaking, I meant that the chain would come off. We just have to put it back on again. My bad for the confusion

I’ve considered using 100rpm cartridge to fix the jamming, but I’m not sure how much of a difference that’ll make, and I also figured that even if it stops the intake jamming, that may just force the chain to break off more often.

Your sprockets are too small. Smaller sprockets leads to less teeth which leads to more force being transmitted through each tooth and thus each chain link, leading to more breaking. My robot’s intake used the exact same sprocket sizes and it regularly blew off. I use 84 tooth now (the biggest size) and nothing ever breaks.
If it helps, you can also make a second layer of chain to spread the load out between the two sets of chain 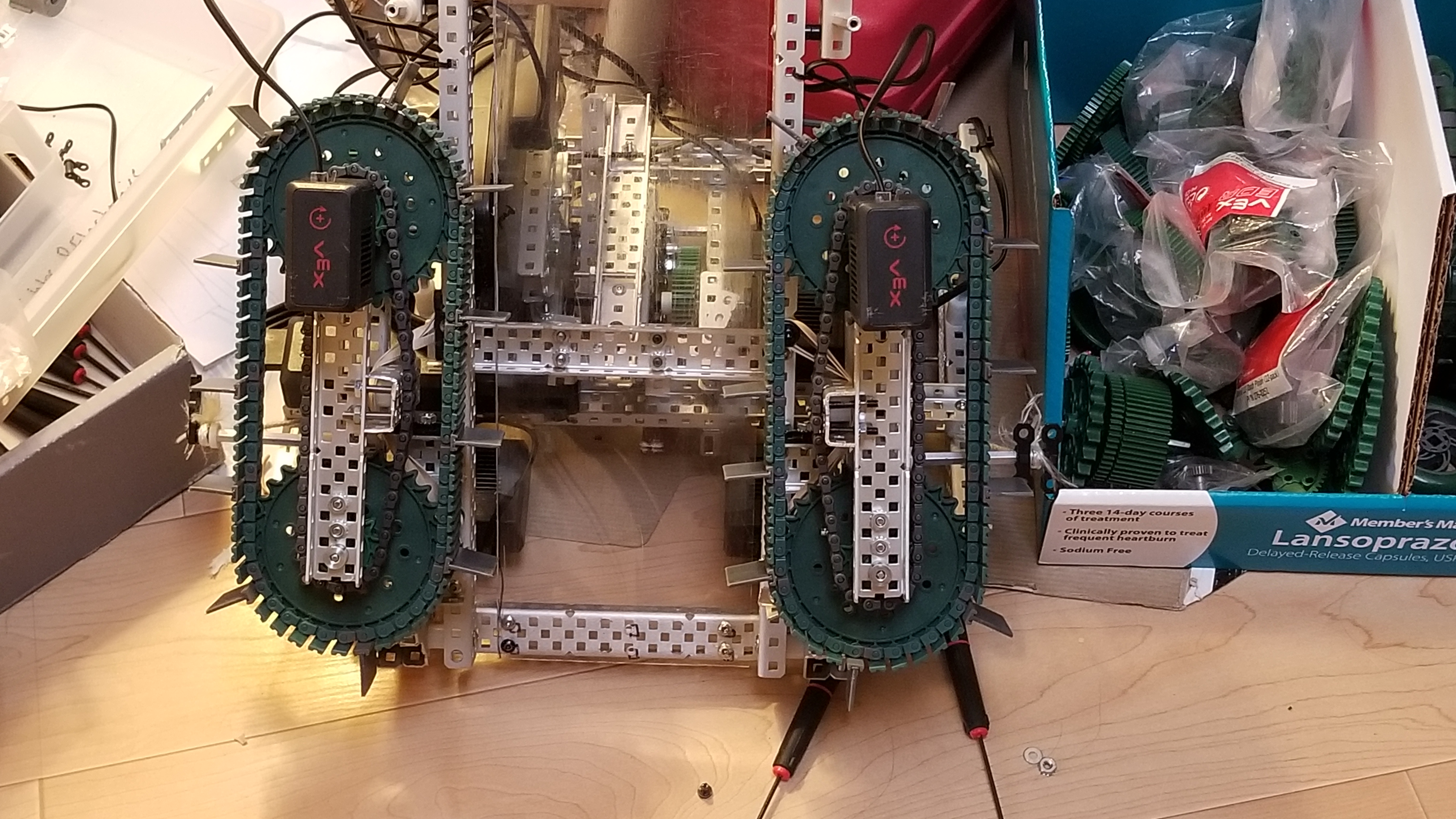 What do you mean by a second layer of chain? Like a second set of sprockets on top?

Never mind, looking at your picture I see what you mean. That’s an incredibly good idea, I think I may have to run something like that on my robot, as that’s the biggest issue with my robot at the moment

I’m very confused as to how the additional, smaller set of sprockets (from your picture) helps.
I thought you meant a second set of equally sized sprockets on top such that there was more contact area, therefore decreasing pressure (P=F/A)

That secondary chain is pretty neat!

@littlebro5, I will add to the @Railgunawesome tips that you should try to use full width chain links like he does and shorter flops.

Also, put flops at every fifth or sixth link - that worked best for us.

The load of turning the rollers is spread across two sets of chains, the smaller set and bigger set.
If the total force required to turn the roller was 100 newtons, (just making up bogus numbers) then each set of sprockets would have 50 newtons of force on them. A single roller would have to take all 100 newtons, placing more stress and making it more likely to break.
I place the smaller set of sprockets on top for ease of maintenance.

Props to ( I believe) 285R for the idea, I saw them running it at a comp. and it seemed like a great idea at a time when my intake broke too

I see, thanks so much for all your help!

The load of turning the rollers is spread across two sets of chains, the smaller set and bigger set.

That’s really big brain tbh.
using 2 single rollers on each side rather than 2 sprockets with tread going around both also eliminates chain breakage.