Intentional change of design focus via rules this year vs. previous years?

World champ hasn’t happened yet, but here’s the highest score I could find, 22 points:

Do you see the difference between previous years and this year?

Look at those crazy, specialized machines for gathering, processing, stacking, etc. The possible point spread was 0 to maybe 500 points on Ringmaster. There’s a lot of room for micro-improvements. Very easy for the world-champion to one-up their competition by even getting one or two extra rings.

But Next Level’s rules and design are so tight that it seems to almost nip off that kind of crazy innovation. Even if we could carry more than one hub, the way the hubs are designed (hollow) makes them hard to stack, and the goal areas are so small that many stacks is impossible.

So you can see some teams getting 22 points already. Maybe 32 points is possible… but anything above that seems unlikely. How can we go from local matches to a world champion with only a 10 point spread?

I calculate the highest possible score at 47 points, and that’s with a single 5’8" column of 17 hubs that even a human likely couldn’t stack (because they are so unstable). But also, a robot would have to violate the hight limitations to achieve this, not to mention stacking one hub every 3 seconds. Even a 22 to 47 point spread would be pretty tight to allow for world-wide differentiation.

And the hanging bonus has almost no differentiation to allow for crazy innovation. Where’s the bonus for the robot that is completely above the bar at the end?

So instead of crazy specialized contraptions, it seems like the world champion will be determined through a mix of driver skill and luck. Hundreds of buldozing forklifts.

This seems like a pretty marked change from the history of VexIQ competitions in the past. It must have been intentional. Can anyone on the advisory board speak to those intentions?

Just tested it, and a human is able to stack 17 hubs in a single column, but a single puff of wind will knock it over at that point.

Also, so far, a human has not been able to build such a stack in one minute!

My understanding is teams are already scoring 38 in competitions

Highest score I’ve seen on video so far is 25 points:

Any videos of even higher scores?

Look in VEX VIA. No videos I’ve seen. Looks like they are a little more tight-lipped this year… 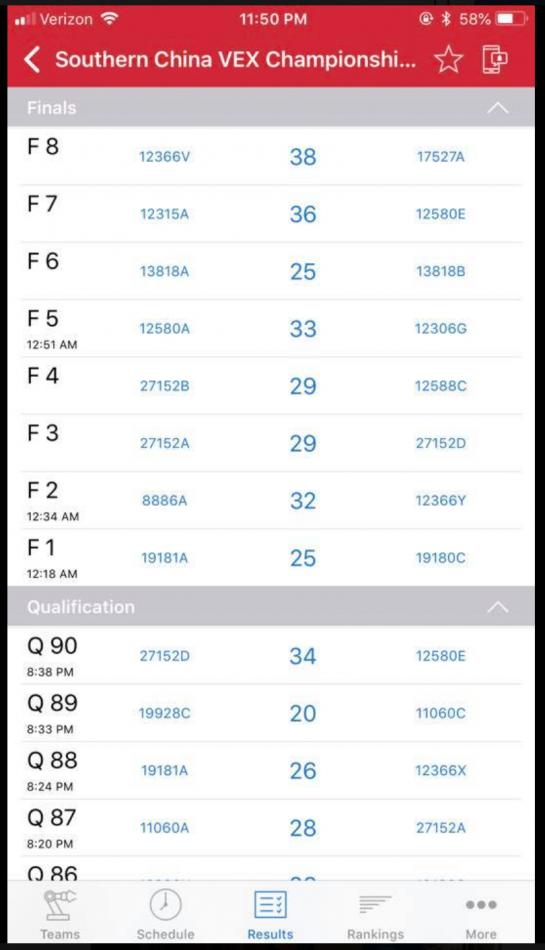 Ugg… Android version of the app looks different, with different features. Also, for some reason, it’s not fetching any events after Feb 2018 (Ringmaster Finals)

I guess I’m going to be proven wrong, but I just cannot believe that 38 points is possible in one minute, given the “one hub off the ground at a time” rule.

I agree with your assessment 100%. I think they saw so many builds that NO kids could have come up with. I think they tried to nip that in the bud and went a little too far in the process.

I mean, there’s not many designs that will work given the constraints. Yes, we will see a lot of bulldozer/forklift things.

My pie in the sky idea would be a set of robots that work together. One is a stacking crane that sits between the 2 score regions. The other is a bulldozer with a counter-rotating bar out front that ‘flips’ and pushes the hubs down the field to the crane. The problem with this is a likely inability (due to time/design) to high-hang.

Another issue is what to do with leftover time. We are now down to 39 seconds and have not even practiced that much. What can be done with the extra 21 seconds? If you try to get some more hubs you run the risk of 1) knocking the yellow one off or 2) chasing hubs and losing track of the clock.

Sorry to revive an old thread, but I’m still thinking about this issue. Turns out that the prediction was true, for the most part. By Worlds, everyone was kinda hitting that 40-point ceiling (2 perfect pyramids, both hang), and I’m pretty shocked that there wasn’t a tie for 40 points at worlds.

The Chinese “quad drag” design ruled the roost. Once that that first video posted in October of last year, every winning robot at our local competition copied it.

It’s also interesting how Squared Away riffs on this general direction. The simplest flexbot can help an alliance get 100 points. BUT… the balls add differentiation. At our local competition yesterday, second place was 102, and first place was 104. There were no balls on top, and they won by random chance pretty much (two extra balls ended up inside cubes). Of course, stacking some balls on top adds a whole additional range of scoring, with plenty of room for differentiation at the top (between 100 and 170).

But at our competition yesterday, one of the winning robots was the tiniest, simplest looking thing ever. The kids were just excellent drivers.

So this is a nice middle ground. Great job, Vex IQ competition planners!