When we turned on our V5 Brain “Invalid Asset Table Version” showed up on the screen. We downloaded the V5 Firmware utility to enable “force update” , we closed all the software the computer, we also did a battery diagnostic the message we got was “C++ library mismatch”, the screen has not changed its message.
Is there any thing else that we can do to resolve the issue?

How old is this V5 brain ? What version was it running before showing the error ?

Did the force firmware update succeed and allow the brain to boot to the home screen ?

What version was it running before showing the error ?
We have several brains in our school (around 50), I can precisely not say the latest version installed on this particular brain. The update is done well on all the others without problems.

Did the force firmware update succeed and allow the brain to boot to the home screen ?
When we enable the forced update option, nothing happens, no button is displayed to launch the update, the utility firmware’s screen as well as the brain screen remains unchanged.

Force update should cause “checking for vexos update” to show again and then display the “update Now” button. Selecting Update Now should cause a vexos update. Are you saying that button never displays ? What does the firmware utility show after toggling the force update button ? 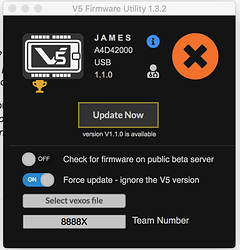 Are you saying that button never displays ? What does the firmware utility show after toggling the force update button ?

Yes, nothing happen. The firmware show nothing more, no change.

Also, instead of an orange X, a red exclamation mark is displayed regardless of whether the force update option is enabled or not.

Red exclamation mark can only happen for a couple of reasons, usually a network issue, the updater cannot get to the vex server and cannot determine that the network is offline, or a low battery situation on the brain. In both cases there should be an additional error message, see below.

Is the brain serial number and version shown ?

Perhaps verify the firmware updater can connect to a working brain and not show any exclamation marks.

If flash memory in the brain that shows asset table error is corrupted or damaged, the code may not be working correctly and not communicating with the PC. It very unusual to get an asset table error from a brain with no other causes (ie. a failed firmware update). 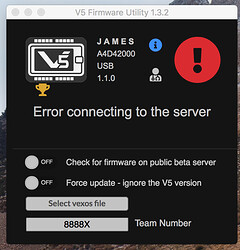 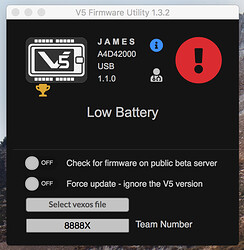 Were you able to resolve this issue? Our V5s were purchased over the summer and 1 of the 5 brains gives this message. I’ve tried all of the tips with no luck. It has given the message since the first time my scholars turned it on. Help, please.